This week’s clear winner in the FX markets has been the New Zealand dollar. It jumped after NZ Superannuation Fund Chief Adrian Orr was named as next governor of the Reserve Bank of New Zealand.

This week’s clear winner in the FX markets has been the New Zealand dollar. It jumped after NZ Superannuation Fund Chief Adrian Orr was named as next governor of the Reserve Bank of New Zealand. Many regard him as a seasoned veteran who is well known by the business community. He may possibly be more hawkish than his predecessor, too.

The kiwi will remain in focus next week as we will have important data from both New Zealand and the US. From NZ, the data include ANZ Business Confidence, GDT Price Index and third quarter GDP, while from the US we will also have Q3 GDP, only this is the final estimate and thus unlikely to have a big impact on the dollar. In addition to GDP, we will also have some US housing market and consumer spending data, as well durable goods orders and core PCE Price Index.

But after this week’s big rally the downtrend may have ended for the kiwi, as price has created a higher high above the most recent swing high of 0.6980, a level which was also defended on the pullback. The NZD/USD had already made a higher low after creating a false break reversal pattern beneath the May 2017 low of 0.6820 in mid-November.

If the uptrend could be maintained then the next potential resistance and thus a bullish objective would be at 0.7055, and old support level. Beyond this, the bulls may aim for 0.7120 next. On the downside, 0.6980 is the key support to watch – a potential break back below here could lead to a drop to the next support at 0.6950. 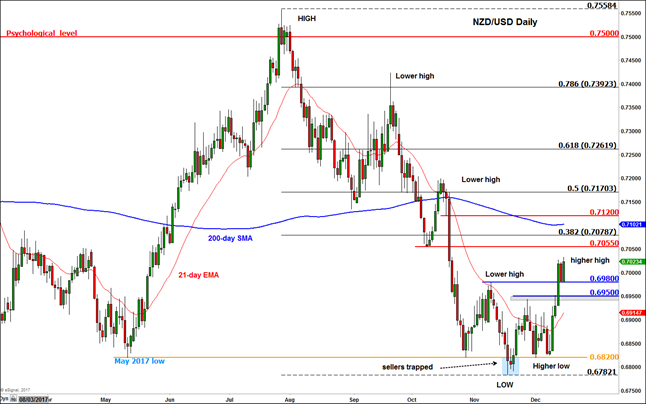