After all, the report has shown job growth for a stunning 92 consecutive months, with most of those readings clustering around the 200,000 new jobs level (at least when you take a moving average of the last few reports). By any measure, the unemployment rate is very subdued at 4.0%, last month’s 0.2% rise notwithstanding. In short, the “employment” half of the Federal Reserve’s dual mandate has been more or less fulfilled for years; it’s the “moderate inflation” half of the mandate that’s now most interesting for traders.

On that front, wage growth (one of the best leading indicators for inflation) has remained stubbornly subdued. As the chart below shows, average hourly earnings have been stuck in the 2.4%-2.8% growth range for the last two and a half years:

With no signs that a pickup in price pressures is imminent, the Federal Reserve is content to stick with its gradual, every-other-meeting rate hike schedule, and as a result, there’s been no new catalyst for traders to buy the greenback. As my colleague Fawad Razaqzada noted in his full NFP preview earlier today, expectations are for 213k new jobs and a 0.3% m/m increase in average hourly earnings, though it may take an impressive beat of those numbers to boost the beleaguered buck.

Speaking of the greenback, it’s gaining substantial ground against the New Zealand dollar today. Since peaking near 0.7400 in mid-April, the pair has trended consistently lower over the last three months. Rates sliced through previous support near 0.6850 in late June, and that level has now turned into a key resistance level through the month of July.

Looking ahead, a break of the near-term trend line near 0.6740 (perhaps on strong jobs & wages figures) would open the door for a move back down to the 2-year low at 0.6690. Conversely, a weak report could prompt the pair to bounce off that support level for a retest of previous-support-turned-resistance around 0.6850. 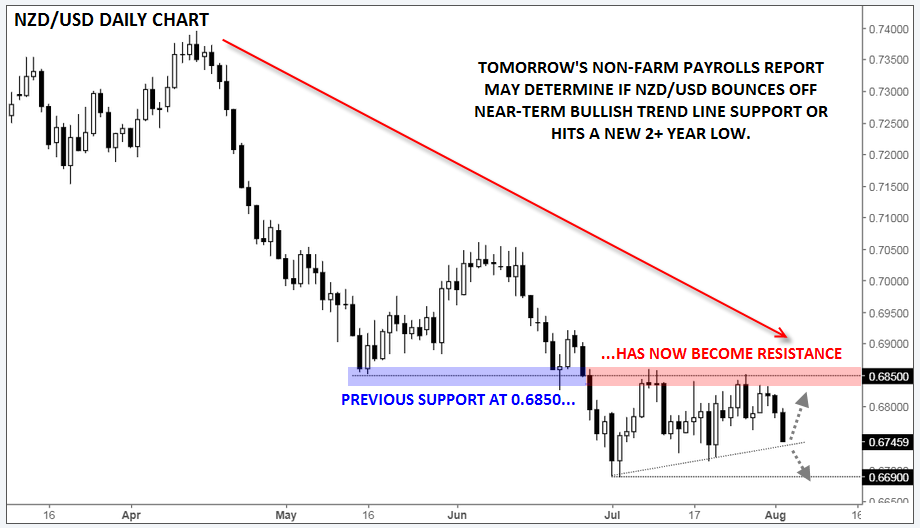