The first insight into how the oil industry is doing will come from oil services firm Schlumberger on Friday.

The US earnings season starts next week with Wells Fargo, Citigroup and JP Morgan breaking the ice on Tuesday. Most of the oil majors won’t report until the end of January or early February, but the first insight into how the industry has done in the last quarter will come from oil services firm Schlumberger on Friday. Given that Schlumberger provides services to all the main oil producers and to a number of sovereign governments, Schlumberger’s regional update will give a sense of how the oil project pipeline is progressing.

The World Bank has slightly revised downwards its global growth forecasts for this year to 2.5%, a touch above the 2.4% growth in 2019. This may become problematic for OPEC as the cartel operates based on a higher growth assumptions for this year and may end up being forced to adjust them downward by the time of its next meeting in March. Demand from developed economies doesn’t show any signs of a turnaround, and with US oil production continuing to expand, the risks seem to be stacking towards a scenario of oversupply. The majority of global growth is still concentrated in the BRIC countries, and China is still leading the growth here. Chinese Q4 GDP and industrial production data next week will show if there is cause for concern for oil investors.

The signing of the US China trade deal, which is expected either on Jan 15 or shortly after, will probably come with much fanfare, but it still remains to be seen which of the punitive tariffs will actually be removed.

According to the World Bank, Guyana’s GDP growth is about to jump from 4% in 2019 to 86.7% (!) this year. Most of this growth is expected to come from the country’s oil industry which is expanding at a fast enough pace to catch up with Brazil by 2025. Until now Guyana, which has only a population of 800,000, has mainly produced and exported rice, sugar, aluminum, shrimp and bauxite, but vast new offshore oil production coming on line is about to change that.

Exxon Mobil started pumping the first oil from Guyana just before Christmas and is expected to raise  output to 120,000 bbl/day over the next few months, and eventually to 750,000bbl/day in the next five years. Other international players already active in the country include Tullow Oil, Total SA, Hess and Qatar Petroleum.

For the moment the US and Iran seem to have stepped away from the brink of a conflict, but it would be far too early to dismiss this as a major factor in the market. If the conflict started affecting the Strait of Hormuz, the world’s largest transit route for oil, East Asian countries would be the most impacted. Nearly 80% of the oil leaving the Gulf is destined for China, India, Japan, South Korea and Singapore. The daily flow through the Strait of Hormuz is around 21m bbl/day, or just over 20% of the global supply. There is no fully functional alternative although Saudi Arabia and the United Arab Emirates technically own pipelines that could ship almost a third of that volume via alternative routes. 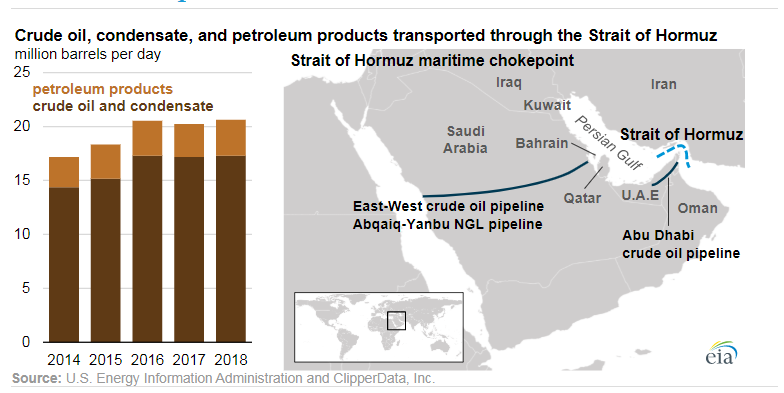