The plunge in WTI price to below zero in April has affected North American drilling far worse than anywhere else in the world.

The US oil rig count has fallen off a cliff over the last four weeks, and the speed of closures has accelerated the longer the COVID-19 epidemic has lasted. According to the Baker Hughes weekly US oil rig count, in the week ending May 15, only 339 rigs remained in service, 648 less than in the comparable week last year. A similar situation is taking place in Canada, where only 23 rigs remaining operational compared with 63 last year. The plunge in WTI price to below zero in April has affected North American drilling far worse than anywhere else in the world, which has seen a -60% collapse in oil rigs vs. a more moderate -13% decline globally. Only 8 rigs closed in the Middle East and 40 in Asia.

After the rollercoaster of price changes the US rig count should start stabilizing, particularly as states progressively reopen. However, the next monthly set of international numbers could potentially show a large dent in Latin American production as the coronavirus ravages Brazil and Ecuador. Latin America’s largest producer, Venezuela, is for the moment not a coronavirus hot spot. 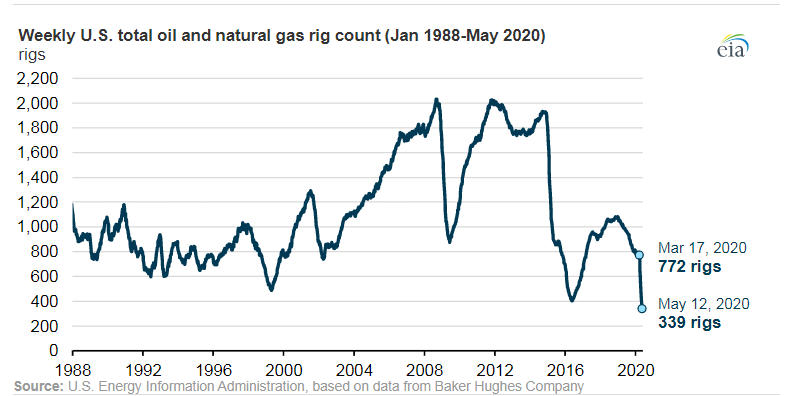 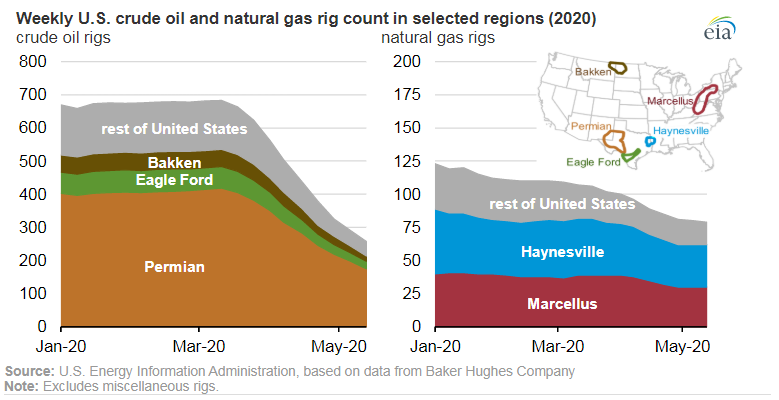 Demand for jet fuel will start picking up over the next week as more and more airlines start taking back to the skies. While travellers are being torn between having itchy feet after weeks of lockdown and concerns over health risks involved in travel, air travel will likely pick up between 15% and 20% in June. For instance, the three busiest European tourist destinations, France, Italy and Spain, are also the countries that have been the worst hit by the coronavirus. Lufthansa is resuming flights to 106 destinations but only 20% of its massive fleet, the biggest in Europe, will start flying initially. Smaller Austrian and Brussels Airlines will remain grounded. Big US carriers, Delta, American and United Airlines are also beginning to reintroduce foreign flights, including those to China. Delta, for instance, suspended almost all of its overseas flights during the pandemic but from June will start flying again to the Caribbean, Latin America and London. It remains to be seen how well the London route will operate given that the UK has a 14-day quarantine in place for all travellers entering the country.

Car sales are plunging but transport demand is picking up

In Europe, where public transport is a popular transport solution, social distancing requirements are making it increasingly difficult for buses and trains to remain a financially viable option. As lockdown restrictions ease, the first thing that is noticeable is a far larger number of cars on the road. While this is not reflected in car sales – European April car sales plunged 76%  - June petrol sales will nevertheless show a substantial increase compared with March, April and May. In the US the speed of recovery in transport demand will largely be linked to the job market. While a lifting of stay-at-home orders across all 50 states will ensure a steady pickup in demand the high number of job losses will keep a dampener on demand recovery.