The months ahead could see a further decline in oil prices with proper recovery not settling in until 2021.

The World Economic Forum in Davos usually provides ample headlines for the oil industry, but this year one strategic player will be absent. Russia’s president Vladimir Putin plans on staying at home to see through a constitutional shake-up he launched in January designed to keep him in power after the 2024 election. Instead, he is expected to send an aide to represent him in sideline talks with other major oil producers.

Davos is more likely to turn again into a PR battle ground on climate change as environmental lobbyists make a stand against major oil firms which will also be present. Activist Greta Thunberg is already on her way to Switzerland for a pre-Davos protest on Sunday and other events are scheduled later in the week.

For CEOs of oil majors who will also be gathering in the Swiss ski resort, apart from the climate change headache, another issue will be trying to gauge if global economic growth will be strong enough to generate momentum in oil demand this year or whether prices more likely to stall at the current level.

Despite the tumultuous start to the year with the flare up of tensions between Iran and the US, the bounce in prices proved to be short-lived. If anything, the months ahead could see a further decline in oil prices with proper recovery not settling in until 2021. In its latest report, the US Energy Information Agency forecast Brent crude spot prices to average $65/bbl this year and to rise only slightly in 2021 to $68. It pegged WTI on average at $59 in 2020 and at $62 in 2021. 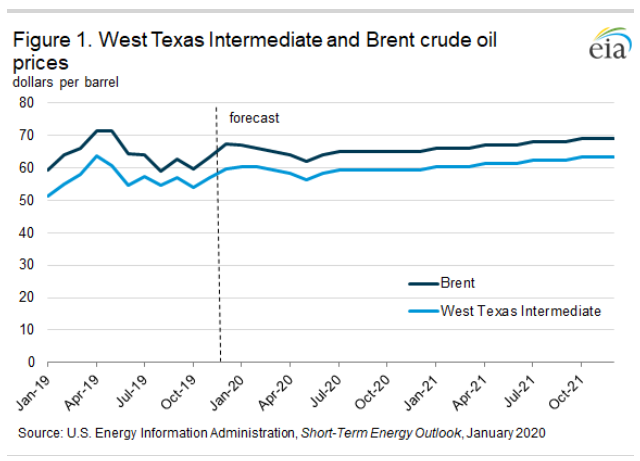 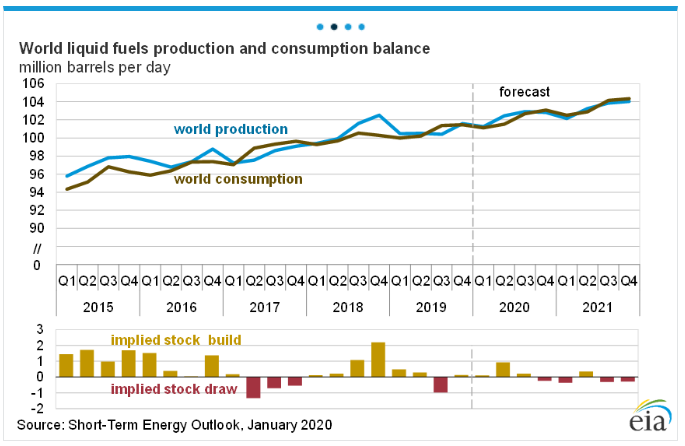 Is US oil output really slowing down?

The latest data from the EIA is also showing that the rapid growth of US oil production, which at one point in 2019 reached over 21% per annum, is finally running out of steam. The agency now forecasts growth of only 4.5% year-on-year in the first quarter of 2020, dropping to 4.1% in the fourth quarter. However, it is far too soon to write off US shale oil growth; it is just that the pace of growth will be slower than before. Domestic economic growth continues at a good pace, as does demand from transport and from industry. Also, for the first time, the US is about to establish itself as a net exporter of crude during 2020. US trade data, particularly data from the US Department of Energy Statistics Office, may be a better indicator of this trend over the coming months than the weekly EIA and API crude oil stock updates.