As we approach the end of the week, gold is trading slightly off its best levels thanks in part to a rebound for the US dollar and the recent recovery in stock prices reducing the appeal of the safe-haven commodity.

As we approach the end of the week, gold is trading slightly off its best levels thanks in part to a rebound for the US dollar and the recent recovery in stock prices reducing the appeal of the safe-haven commodity. The metal is still up for the fourth consecutive month, so its struggle to go further higher this week should come as no surprise. Clearly some profit-taking should be expected. It is far too early to suggest that gold has peaked, even though it has hit one of our major long-term levels around $1295/$1300. But for us to turn bearish on the metal again, we do need to see more evidence that the buying momentum has faded, or the US dollar’s downtrend is over. In fact, we continue to expect the greenback to decline further over time as expectations over Fed rate hikes diminish. What’s more, we think there is a good chance equity markets will struggle this year, as companies may struggle to sustain the same levels of profitability we have seen over the years due to the recent weakness in economic conditions around the world. Given this fundamental backdrop, we are bullish on gold by default. In the short-term, though, it is possible that gold may retreat a little given that it has hit that $1295/$1300 resistance range as mentioned above. As can be seen from the chart, this was the last support zone prior to the breakdown back in mid-June. Once support, this region has now turned into a bit of resistance. We don’t know how much of a retracement gold will suffer from here, if much at all. But the consolidation here should at least allow the momentum oscillators such as the Relative Strength Index (RSI) to work off its “overbought” conditions mainly through time than price. Once gold is no longer “overbought,” momentum-chasing speculators may return and drive gold prices further higher. 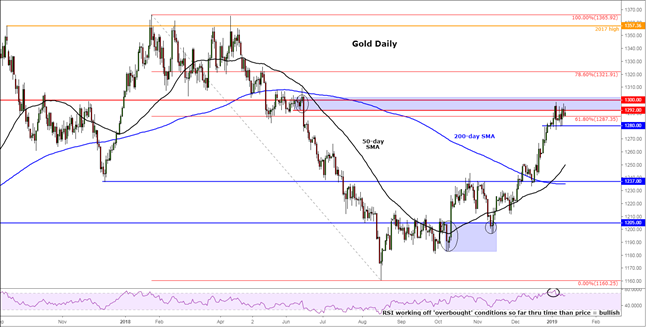