S&P 500: overreaction to nuclear fears or an imminent correction for stocks?

Escalating nuclear tensions between the US and North Korea caused a risk-off response in the markets yesterday. The jitters have prevailed in the first half of today’s session with shares in Japan closing down more than 1% overnight, while European indices are off between 0.7 and 1.5 per cent at the time of this writing.

Escalating nuclear tensions between the US and North Korea caused a risk-off response in the markets yesterday. The jitters have prevailed in the first half of today’s session with shares in Japan closing down more than 1% overnight, while European indices are off between 0.7 and 1.5 per cent at the time of this writing. It will be interesting to see what happens when Wall Street opens for trading later this afternoon. Are we going to see some follow-through on the downside for once, or are “bargain hunters” going to come and pick the dip at these “lower” levels again (even though we are only 1% off the record highs). Could investors have overreacted to the news, or was that the excuse needed for the sellers to come in and take advantage of the extremely overbought equity prices? Lots of questions, but by the close of the bell tonight we should have a good feel for sentiment one way or another. But as things stand, risk is definitely off the menu and if you-know-what hits the fan then things could turn ugly really quick. This is especially the case given the extent of the recent rally, which means there will be lots of stops resting below market. So, the downward move could gather pace due to technical selling.

As well as the stock market sell-off, safe haven currencies and commodities have bounced sharply higher. The Swiss franc has resumed its traditional role as a safe haven currency, causing the EUR/CHF and USD/CHF pairs to turn sharply lower after their recent good run of form, while the USD/JPY has dropped to its lowest level since mid-June. Gold and silver have extended their gains, as we had pointed out the possibility prior to yesterday’s news – click HERE for more. In the bond markets, the 10-year Bund yields have fallen to their lowest since the end of June as investors seek safety in benchmark government debt.

While I am not calling this a top, the scary thing as far as the buyers are concerned is that so far we haven't really experienced a typical summer correction in the stock markets, especially on Wall Street. But after yesterday's sharp sell-off, a number of global stock indices are now flashing warning signs. If one can trust these technical bearish signals then we may see a long overdue correction. After all, the S&P 500's relentlessly rally has driven it to extreme exhaustion levels, and now we have a bearish-looking candlestick pattern and a false breakout attempt on the daily time frame. While the rally could continue in what has been a liquidity crunch melt up, the potential for a sharp counter trend move is now high. The benchmark US index has already surpassed the 200% extension levels of its previous long-term ranges between the years of 2007-2009 and 2014-2016 (see the weekly chart). On the daily, the S&P futures chart shows a failed breakout attempt. If support at 2457 breaks then there is a possibility for a sharp drop towards the next support around 2427 area, which was the last level of resistance that hasn’t been re-tested yet. The last swing low was at 2402. If this levels breaks then we will have our first lower low. In this potential case, the bears may then exert more pressure as now they will have a valid reason to sell. But while we remain comfortably above 2402 level any short-term bearish signals should be treated carefully, for the trend is still technical bullish. 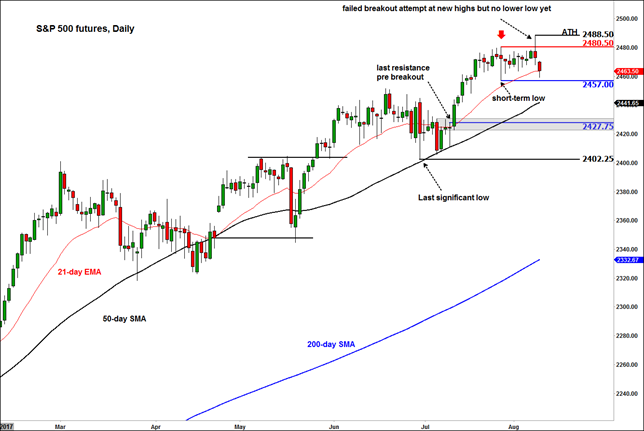 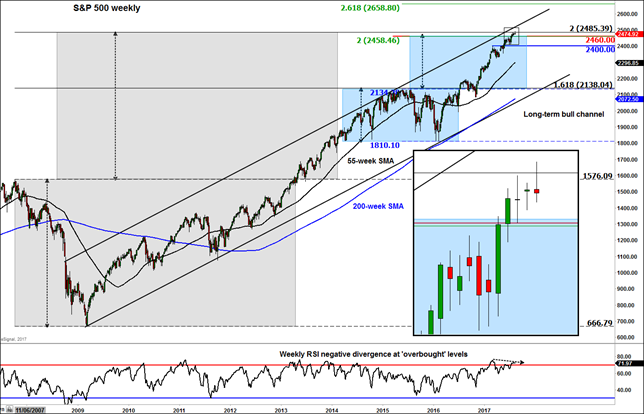