The pound has fallen sharply over the past couple of days. It has been among (if not) the worst performer in G10 currencies. As well as uncertainty over how and when the Brexit process will start, the pound has been undermined by weakness in UK data as industrial production in October suffered its worst month since 2012. The currency’s latest drop is not exactly gigantic, but it does represent a sizeable retracement against the recent gains made amid hopes of a ‘soft’ Brexit. I do however think the worst of the selling is over as the Bank of England is no longer looking to cut interest rates again. But it nevertheless remains vulnerable to sharp falls here and there. However against weaker currencies like the Japanese yen, it may be able to stage a comeback soon.

Technically, the GBP/JPY has fallen back below the 200-day moving average again. So far however, the weakness can be explained away by the impact of profit-taking rather than actual selling pressure. After its recent big upsurge, the unit looked heavily overbought anyway as the RSI went north of 70. What’s more, taking profit around the 145.40/95 area makes technical sense. After all, this area was an untested old support and corresponds with the 61.8% Fibonacci retracement level. Thus it is far too early to say if the long-term bear trend has resumed for the GBP/JPY. In fact, it could very well be a healthy pullback as far the bulls are concerned. The retreat will allow the oscillators to unwind from overbought levels, potentially encouraging new buyers to step in around support levels.

If the buyers are still in control of the GBP/JPY then we will need to see the key support levels hold. One such area is around 141.30/142.30, which was formerly resistance. Ideally for the bulls, they would want to see the GBP/JPY bounce back from the upper end of this range. However if price starts to break below here then it is possible that we could be in for a deeper retracement towards the next support at 138.80 or even lower. In any event, a potential rally and break above the 145.95 Fibonacci level would be considered a bullish outcome. In this case, the bulls may then aim for 148.20 followed by the 78.6% Fibonacci retracement level at 152.20 as their next objectives. Potentially, the bullish trend could even continue until we reach 160.00/15, a psychological level and the last swing high prior to the last move lower.

So, don’t write off the pound just yet, certainly not against the yen. It will need to break a few bullish barriers before the sellers can grow in confidence. Until and unless that happens, the near-term path of least resistance is still to the upside. 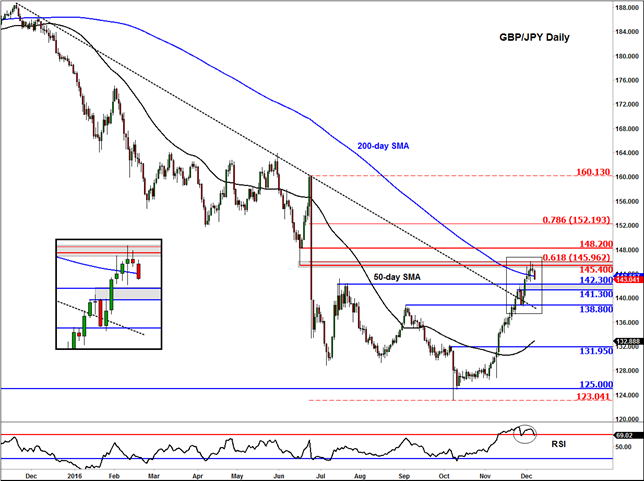