What a comedy show this is turning out to be. Last night saw sterling tumble after research by the Times newspaper and YouGov suggested that there could be a hung parliament. Today, it retraced all of those losses after a Panelbase Poll showed that the Conservatives’ lead was not only intact but that it had risen to 48% from 47% previously, while the Labour party remained unchanged at 33%.

What a comedy show this is turning out to be. Last night saw sterling tumble after research by the Times newspaper and YouGov suggested that there could be a hung parliament. Today, it retraced all of those losses after a Panelbase Poll showed that the Conservative’s lead was not only intact but that it had risen to 48% from 47% previously, while the Labour party remained unchanged at 33%.

Get used to this. The pound is going to be very volatile and headline-driven in the coming days until the election is out of the way. Sterling is currently reacting negatively to any narrowing in the polls between the two major parties mainly because of the threat of Labour’s promise of corporation tax increases, which is deemed by the market as growth-chocking and not so business-friendly. If new polls show support for Theresa May is falling then the pound could fall once again, and vice versa. It is as simple as that. Thus, UK data should continue to play second fiddle to politics until the elections are over.

A word or two on FTSE

Interestingly, the FTSE seems to have decoupled itself from the pound. Despite the sharp rebound in sterling this morning the FTSE was able to climb to a new all-time high. Was that just month-end flows, or does it mean that the stock market speculators are anticipating a drop in the pound? Well, we don’t know the answer of course, but it is worth remembering that the movements in currency markets are just one of the variable that determine stock prices. Global stocks remain supported above all by historically low interest rates. The impact of currency movements are short-term.

Trading GBP must be frustrating, but it needn’t be

The headline driven pound is surely making trading very frustrating, especially for swing traders. But for the shorter-term focused speculators, the pound’s erratic sharp short-lived moves can be rewarding. This serves as a reminder that traders need to be consciously aware of different market environments, and have appropriate strategy for different market profiles in order to grow. Either that, or only focus on markets that meet their trading style.

GBP/USD clings on to key support

As a result of the earlier sell-off, the GBP/USD dropped to test that key support level that we had highlighted yesterday at 1.2775 before bouncing back. This level remains the line in the sand for us as a decisive break below it could pave the way for a potential drop towards the next area of support around 1.2575-1.2615.

Among the GBP crosses, the GBP/JPY is an interesting one to watch as it approaches a key support area around 140 ahead of the UK elections. This psychological level was the point of origin of the breakout that ultimately stalled at 148. What’s more, a bullish trend line meets the 61.8% Fibonacci retracement level (140.40) around this area. The key questions now are: (1) will the pound get to this level in the first place and (2) if it does, will it be able to bounce back? In the event that the GBP/JPY fails to hold up here, then it could drop to test its next key support around the 200-day average at 138.60 next. Meanwhile in terms of resistance, the levels to watch are at 142.50 (which was being tested at the time of this writing), 143.50 and 145.80. 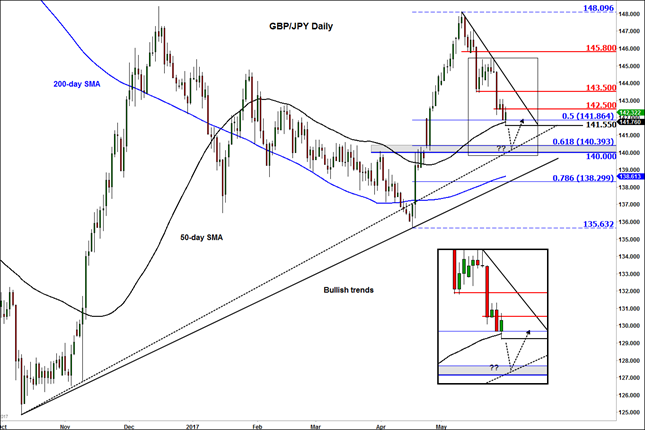