The UK unemployment rate unexpectedly dropped to 4.4 from 4.5 percent, the lowest level since 1975. Job creation in the three months to June rose by a good 125 thousand, easily surpassing expectations, while jobless claims in July fell by 4.2 thousand applications when a rise of 3.2 thousand was expected. The good news didn’t end there: the average weekly wage growth rose by 2.1 percent in the three month to June, compared to the same period a year ago, while May’s figure was revised up slightly to 1.9 from 1.8 percent reported initially.

Despite the solid jobs report, the pound could not hold onto earlier gains as the GBP/USD gave up about 50 percent of its gains made in the immediate aftermath of the data release by midday in London. The US dollar has come back strongly against a number of currencies. This is due to improvement in US macro data again as highlighted, for example, by retail sales figures yesterday, and as most of the negativity is priced in. However, the pound was doing better against the euro, with the EUR/GBP pair holding near the day’s low at the time of this writing. The single currency fell after Reuters reported, citing a source, that the ECB President Mario Draghi will not reveal any new tightening policy plans at Jackson Hole as the central bank prefers to wait until autumn before announcing any plans on QE.

GBP/JPY one to watch

But among the GBP crosses, the GBP/JPY looks the most interesting one to me as it trades around a key technical support area. As can be seen from the chart, the volatile pair has been hanging around the still-rising 200-day moving average and bullish trend line around the 1.4200-1.4270 area. For as long as price holds above this area, the bias would remain bullish. However a breakdown below last week’s low at 141.27 area would be bearish. On the upside the key resistance area that needs to break if we are to see any significant bullish follow-through is around 144.05-144.45 – this area being previously support. If price breaks above here then the bulls may target the next resistance at 145.75 and then that long-term resistance range in the 146.50-148.45 zone. Given the number of times the GBP/JPY has tested and respected this long-term resistance area, I imagine there to be a lot of buy stop orders stacked above this zone (representing a pool of liquidity). If the bulls manage to push the GBP/JPY above the aforementioned resistance levels then we may see a run on those stop orders in the coming days or weeks, leading to a potential breakout. 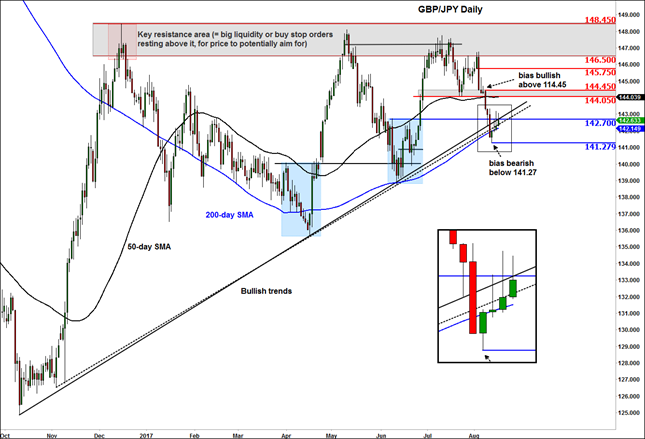