Pressured US stocks dangle off a head-and-shoulders cliff

<p>Wednesday’s hawkish FOMC minutes increased speculation that a June interest rate hike by the Federal Reserve may be more likely than previously anticipated. These higher expectations have helped prompt a boost for the US dollar, a plunge in gold prices, and pressure on US and global stock markets. Additionally, a pullback in crude oil prices on a stronger dollar and abating oil supply disruptions has led to a drop in the energy sector, which has also weighed on equities.</p>

Wednesday’s hawkish FOMC minutes increased speculation that a June interest rate hike by the Federal Reserve may be more likely than previously anticipated. These higher expectations have helped prompt a boost for the US dollar, a plunge in gold prices, and pressure on US and global stock markets. Additionally, a pullback in crude oil prices on a stronger dollar and abating oil supply disruptions has led to a drop in the energy sector, which has also weighed on equities.

In the midst of this pressure on the stock market, the S&P 500 index has formed a rough head-and-shoulder formation, which is often regarded as a potential bearish reversal pattern. As of Thursday, the index has tentatively broken below the pattern, but has not yet confirmed this breakdown.

This key technical pattern has formed after the S&P 500 rose in a sharp uptrend from its mid-February low around 1800 to its late-April high around 2100. Since early April, however, the index has been trading in a consolidation within the head-and-shoulder pattern, establishing the head around the noted 2100-area high in late April. Within the course of the month-long fall from that high, the 50-day moving average has begun to rollover towards the downside, indicating a potential loss of upside momentum.

A strong close below the head-and-shoulders neckline, currently around the 2030 level, could prompt a further drop towards the next major support target to the downside at the 1990 level, which also happens to be the 38% Fibonacci retracement of the noted uptrend from February’s 1800-area low up to April’s 2100-area high. Further to the downside, the actual measured target of the head-and-shoulders pattern is currently around the 1950 level, which is also the 50% retracement of the same recent uptrend. 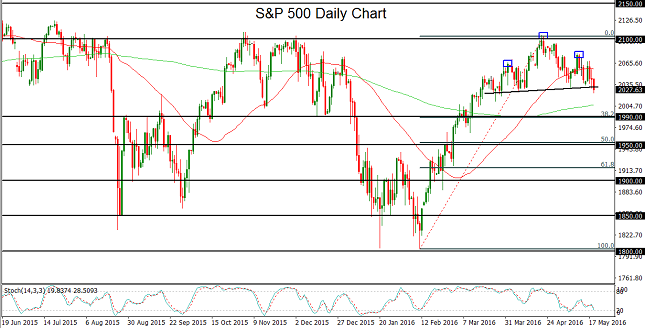