The Federal Reserve’s last policy meeting for the year will be on December 19-20, when the FOMC is most likely to vote for another 25-basis point rate increase.

The Federal Reserve’s last policy meeting for the year will be on December 19-20, when the FOMC is most likely to vote for another 25-basis point rate increase. If the Fed does hike rates, this would bring the total number of rate increases to 4 for the whole of 2018, pushing up the benchmark Federal Funds Rate to between 2.25 and 2.50 percent from the current 2.00-2.25 percent range. Whether the dollar will be able to extend its year-long rally or ease back will now depend to a large degree on any potential changes in economic and interest rate projections the FOMC had made at its September meeting.

At the time of writing, just a week before the Fed’s decision, the dollar was more or less flat on the month. Unless it falls sharply from now on until the end of the year, the Dollar Index is set to end 2018 on the back of three consecutive quarterly gains. But to assume it will finish 2018 this way would be very risky, in our view. We actually think that the days of the dollar’s reign as King of FX could be numbered. However, at this stage, we are merely on the lookout for bearish fundamentals and indeed price patterns to potentially emerge on the currency. So far, we haven’t observed any significant reversal signals on the greenback.

A strong US economy and the accompanying rate hikes from the Federal Reserve have undoubtedly helped to push the dollar higher, not to mention the impact of raised import tariffs on goods arriving from China pushing up inflationary pressures. Meanwhile safe-haven flows out of emerging markets and equities and into the US dollar has further supported the rally. Elsewhere, ongoing political and economic uncertainties in Europe have kept the pressure on the EUR/USD and GBP/USD, while the sell-off in crude oil prices has seen the Canadian dollar losing its appeal in favour of its southern neighbour and so the USD/CAD has rallied.

But these developments have already happened and therefore at least partially priced in. Is it time therefore for the dollar to now start heading lower?

At its September meeting, the FOMC had projected three further rate increases in 2019. The Federal Reserve could very well change this hawkish outlook in the upcoming meeting, although so far we have only seen some mixed commentary from Federal Reserve officials. Fed’s Vice Chair Richard Clarida was surprisingly hawkish at the end of November, after a couple of other members earlier had tried to soften the central bank’s hawkish tone. Crucially, the Chairman himself, Jerome Powell, was also quite dovish at one of his testimonies. The mixed messages suggest there’s no longer a clear harmony among the FOMC and this may well result in changes to the so-called dot plots of the Fed’s economic and interest rate projections from September.

Figure 1: FOMC participants’ assessments of appropriate monetary policy: Midpoint of target range or target level for the federal funds rate as of September 26, 2018 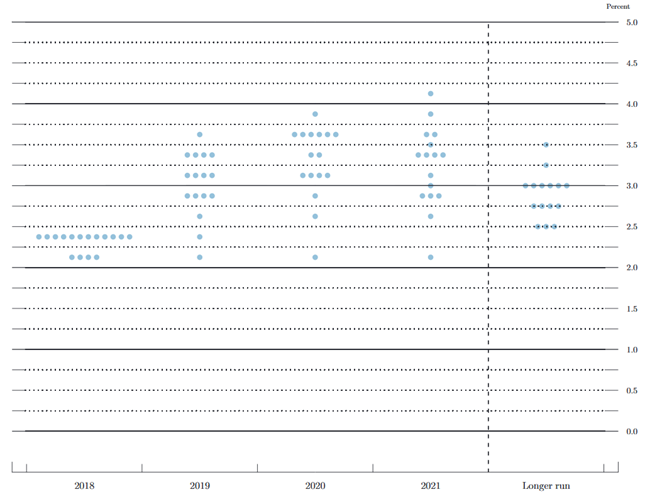 After dominating the headlines for much of the year, trade war concerns eased after Presidents of China and the US finally agreed to a self-imposed 90-day truce to work out a plan to end their dispute. Progress was already on the way, judging by optimistic tweets from Donald Trump and after media reports suggested that China was moving towards lowering its 40% tariff on US-made cars. Prior to the leaders’ meeting at the G20 summit, Trump had again used aggressive tough-talk tactics, threatening to impose tariffs on $267 billion of Chinese imports if they don’t make a deal. His unorthodox negotiation tactics have been rather controversial to say the least. But proponents would argue that he has managed to successfully renegotiate trade deals with its neighbours Mexico and Canada, while he has also made some North Korean friends. The fact that he’s applied the same approach to China isn’t a surprise – and it is arguably working again. But after boasting so much about the stock market gains, he will be desperate to forge a deal now that the major US indices have turned red on the year. So, if a trade deal were to be reached early next year, our assumption is that import duties will be lowered again, which should push down import costs and therefore dampen inflation. The Fed will be aware of this possibility and may mention it in its rate statement or press conference. If so, the markets may price in the prospects of reduced urgency from the Fed to hike rates in Q1, and potentially lead to a rally in stocks and a drop in yields and the dollar.

Taking everything into account, the Fed is still one of the most hawkish central banks out there and this is reflected in the dollar rallying. But with the pressure growing from Trump and given the recent fundamental developments, the central bank may well change its hawkish tone, potentially leading to a dollar sell-off. While it may very well be less aggressive in raising interest rates next year, the ongoing strength of the US economy means the Fed will tighten its belt at this upcoming meeting.

Regardless of the current fundamental developments, the higher highs and higher lows means the technical trend still looks bullish for the Dollar Index. But past performance is not necessarily indicative of future results. The upcoming Fed decision or some other fundamental stimulus may well cause the DXY to break down from its long-term bullish channel or form some distinct reversal pattern at higher levels. If seen, only then will we turn decisively bearish on the dollar. 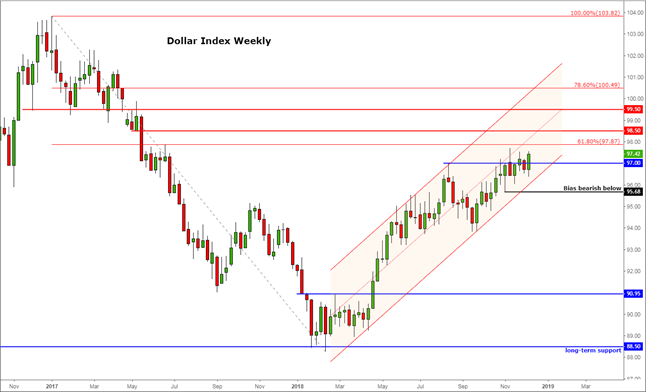