Crude oil prices surged higher in response to comments made by Russian President Vladimir Putin about a Russian-OPEC production cut. Brent oil reached a new 52-week high around $53.70 per barrel while WTI came to within a few cents of the $51.65 level it had hit in June.

Crude oil prices surged higher in response to comments made by Russian President Vladimir Putin about a Russian-OPEC production cut. Brent oil reached a new 52-week high around $53.70 per barrel (see figure 1) while WTI came to within a few cents of the $51.65 level it had hit in June. As Canada is a major oil producing nation, the bullish response from the Canadian dollar was hardly surprising: the USD/CAD dropped below 1.32 again and other CAD crosses rose sharply too, especially against currencies where the central bank is still uber-dovish, such as the yen.

Putin’s comments have taken the market by a bit of a surprise. I think the OPEC and Russia have recognised that sentiment on the oil market is turning bullish and they want to keep that momentum going by committing to what the market is demanding: production cuts. Major oil producing nations like Russia know how punishing the markets can be, so they may well succumb to pressure and actually reduce supply this time around because failure to do so would be disastrous. They have talked the talk, now it is time to walk the walk if they are committed to keeping oil prices north of $50 a barrel.

From a technical point of view the CAD/JPY cross is beginning to look quite bullish on all time frames. On the monthly chart, in figure 2, the CAD/JPY has once again held its own above a rising trend line that stretches back to 1995. It has also defended its long-term 78.6% Fibonacci retracement level at around 75.55.

What’s more, the cross may have formed a key reversal pattern on its short-term charts around the June 2016 low of 76.15 (see the daily chart in the inset, in figure 2). After creating that low, the CAD/JPY had one more attempt to break further lower at the end of September. Although it traded below this level for a while, there was no significant follow-though in the selling pressure. As a result, a false breakout pattern may have been created there. Subsequently, the CAD/JPY has bounced back due to a combination of profit-taking from the sellers and opportunistic buying from those who quickly realised that the balance of power was shifting away from the bears.

More gains could be on the way for the CAD/JPY if it now manages to break above its descending trend line around the 78.65/80 area on a daily closing basis. If successful, we could see a rally towards the next swing high at 80.30. Further near-term potential bullish targets are around 81.20 and 82.25, levels that were previously support and/or resistance.

However, if support at 77.50 gives way then there is scope for the CAD/JPY to go for another test of that 76.15 handle. Ultimately though, oil prices will have a big say in the direction of the CAD/JPY and CAD crosses in general. 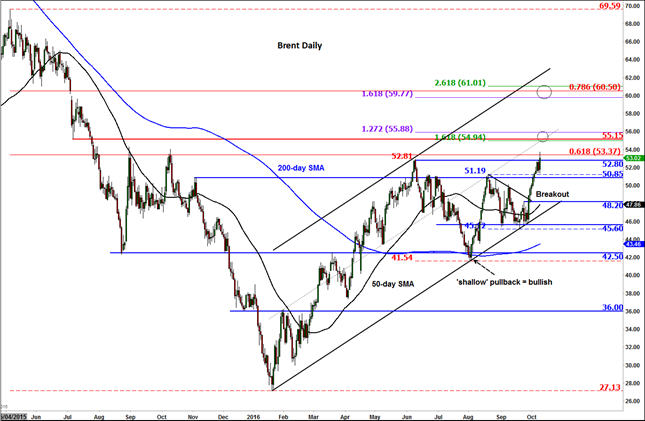 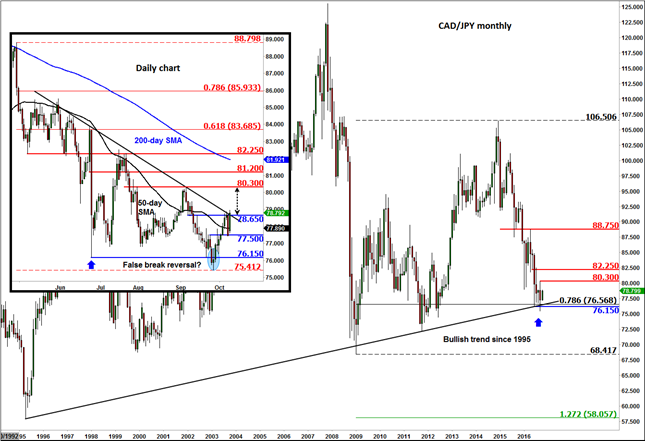