Overnight saw the price of WTI crude hit its best level since May 2015, before falling back a little. Oil prices have hit the ground running at the start of this year, continuing their recovery from the middle of 2017, as global crude stockpiles fell from record high levels and due to good compliance with the production cuts by OPEC and Russia.

Overnight saw the price of WTI crude hit its best level since May 2015, before falling back a little. Oil prices have hit the ground running at the start of this year, continuing their recovery from the middle of 2017, as global crude stockpiles fell from record high levels and due to good compliance with the production cuts by OPEC and Russia. Given that the production agreement has been extended to the end of 2018 at the OPEC’s last meeting, the market clearly expects crude inventory levels to drop further. But with the OPEC set to review the duration of oil output cuts based on fundamentals at its next meeting in June, there is a possibility they could end the agreement sooner than expected. What’s more, oil prices are now at levels many regard as being high enough for US shale producers to accelerate drilling and production in the coming months. This could discourage the OPEC and Russia to maintain their oil supply collusion until the end of the year, as many producers within the OPEC itself won’t be happy to lose further market share to the US. Thus, there is a risk that the agreement could end prematurely, potentially resulting in another supply war.

As a result, I am now on the lookout for bearish technical patterns to emerge on oil prices as I believe they will struggle to go north of $65-$75 per barrel given the above fundamental considerations. However, I don’t anticipate to see low $40s, let alone $30s, again as the fundamental picture is a lot healthier compared to a few years ago. I should also add that I am not necessarily trying to predict the top here; rather I will let price discovery determine that for us. A false breakout above an old high is one of my favourite ways in determining trend reversal, so that’s something I would be looking for in the case of oil going forward, especially as WTI’s weekly and daily Relative Strength Index (RSI) indicators are both at ‘overbought’ levels. In any case, if WTI were to go back below the 2017 high of $60.48, which was hit late in the year, and the 2018’s opening price of $60.09, then the technical outlook would turn bearish on oil. But for now, the bullish trend remains intact as prices remain above key supports. 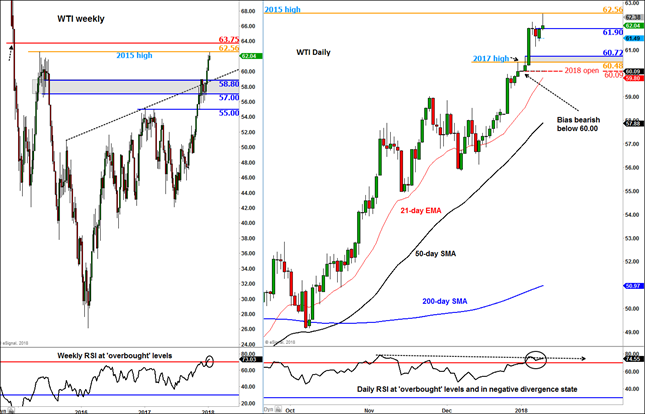