Concerns over weak growth and tame inflation have helped to boost expectations that monetary policy at the Fed and other major central banks will remain extremely accommodative for longer than previously expected.

Ahead of the publication of US retail sales later, global bond yields and equities are falling once again. Weak data overnight from New Zealand and China, where industrial production grew by just 5.0% year-over-year in May compared to 5.4% expected, has further raised concerns over the global economy. As such, interest rate expectations are continuing to fall and investors are piling into the relative safety of bonds, pushing yields even further lower. Gold has consequently broken out and the metal could rise further should US retail sales disappoint expectations of a 0.7% month-over-month rise (0.5% for core sales) later on today. With gold already surging, we are continuing to anticipate further weakness in the USD/JPY pair.

On Monday I wrote that USD/JPY bears were smelling blood even though this pair was staging a mini recovery at that time following a big sell-off the week before. Risk assets, including this pair, found mild support following Trump’s decision not to go ahead with raising tariffs on Mexican goods arriving to the US. Despite this, we remained bearish on the USD/JPY and noted that "once the impact of the Mexico news is absorbed, we reckon the UJ will probably decline further and catch down with the falling US-Japan bond yield spreads – especially if Wednesday’s release of US CPI fails to positively surprise the downbeat expectations." Though CPI did miss expectations, the dollar didn’t immediately sell-off. In fact, it rose a little further against some currencies. However, perceived haven currencies and commodities including CHF, JPY and Gold all remained bid.

These assets have something in common: low, zero or negative yields. With US interest rate expectations continuing to fall, noninterest-bearing gold has been able to shine brightly and it has broken to a new 2019 high today. Concerns over weak growth and tame inflation have helped to boost expectations that monetary policy at the Fed and other major central banks will remain extremely accommodative for longer than previously expected. This is good news for all of these lower-yielding assets, especially during times when risk is also off the menu.

As far as the USD/JPY in concerned; well it has now turned negative on the week after failing to hold its own above last week’s high at 108.20. This is exactly what we were looking for on Monday: “essentially what we are looking for is a failure to hold above last week’s high at 108.60ish.” Now that rates have failed to hold above that level, the path of least resistance is again clearly to the downside. The next bearish target is the liquidity below last week’s low at 107.80, with the ultimate downside objective being the low beneath the January low at 104.90.

However, if rates were to stage a surprise rally, then look for resistance around the 109.00-109.15 area next. But if this area were to eventually break then that would probably invalidate this bearish outlook. The dollar bulls better hope today’s retail sales data exceed expectations. 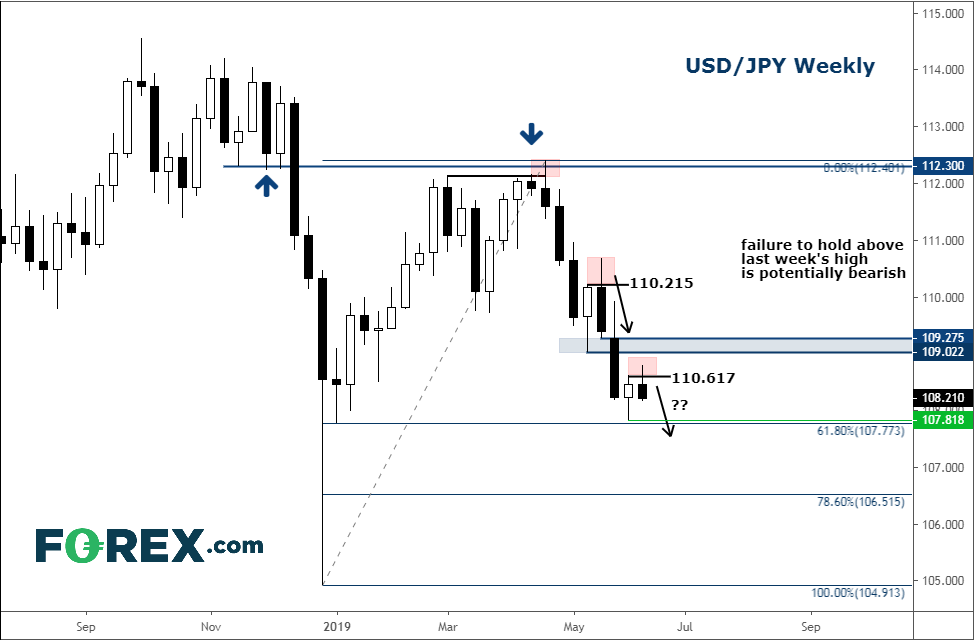