Investors are watching the deteriorating US-China trade relationship closely this week after tensions escalated by both nations increasing tariffs on each other.

This morning, European stocks were finding themselves under pressure again with US index futures also pointing to a sharply weaker open on Wall Street. Risk aversion was also noticeable in other markets, with crude oil and copper prices trading lower. Meanwhile gold and silver struggled to find buyers after their mid-week reversal last week on the back of demand concerns from China and the US amid tariff wars. Instead, haven flows were evident in the FX markets. For example, Japanese yen and Swiss franc were both on the rise again, while the offshore Chinese yuan was on the back foot again.

Meanwhile, the AUD/USD, which jumped at the Asian open overnight in reaction to the surprise victory for Australia Prime Minister, was still trading in the black at the time of writing. Scott Morrison’s pledges to pass tax cuts to shore up a slowing economy is seen as being positive for Australian stocks and the Aussie dollar. However, with the US-China trade weighing on risk sentiment can the risk-sensitive AUD hold onto its overnight gains? In the short-term, we are doubtful given the recent escalation in trade wars between Australia’s largest trading partner China and the US. On top of this, the Reserve Bank of Australia is likely to cut interest rates in the next meeting on 4th June from 1.5% to 1.25% after surprising the markets last time by holding rates unchanged when a cut was expected. A rate cut from the RBA should provide downward pressure on the Aussie, at least in the short-term.

Investors are watching the deteriorating US-China trade relationship closely this week after tensions escalated by both nations increasing tariffs on each other. News that US tech firms such as Google have started to cut off software and components from China's Huawei under the new US ban is likely to trigger further retaliatory reaction from China. In trying to offset the risks the trade war brings, the People’s Bank of China is likely to introduce further monetary stimulus which could lead to further weakness for the renminbi. Sentiment is only likely to turn decidedly positive if the two nations put their differences aside and come up with a trade agreement. At the moment, this looks unlikely and the markets are not optimistic either with stocks dropping.

Is Fed’s Powell concerned about escalation in US-China trade spat?

Meanwhile the economic calendar is light today, although the Federal Reserve Chairman Jerome Powell will be speaking at the Atlanta Fed’s annual Financial Markets Conference. Investors will be listening carefully to any remakes Mr Powell May make about the ongoing trade tensions and how this might impact the US and global economies, and whether this will have any potential implications for inflation and therefore interest rates. The greenback could weaken should we hear surprising dovish remarks from the Fed Chair, especially against haven currencies JPY and CHF.

With risk off the menu, the USD/JPY has started the week on the backfoot despite printing a bullish hammer candle on the weekly chart last week. The bulls would be worried by the fact price has failed to hold above last week’s high around 110.20/22, as this could potentially mean they are trapped. If the USD/JPY fails to turn positive by mid-week then we would expect rates to take out liquidity below last week’s low around 109.00 next. And if there is acceptance below 109.00 then a much deeper correction could be on the way. 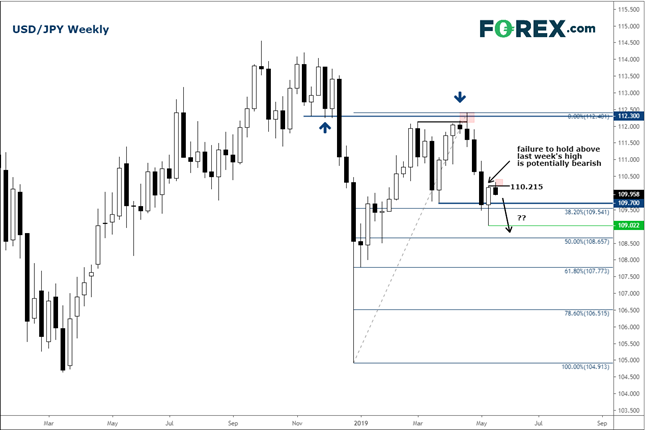