Investors’ say one thing, but do another, two charts to watch

The two charts below highlight the dichotomy that is at play in the markets right now. On the one hand there is a smell of caution in the air, but on the other, capital is not yet moving away from risky assets. The first chart below is the Credit Suisse fear barometer, which measures investor sentiment for a 3-month horizon. This has reached its highest level since November 2016, as US – Russian fears boil over, French election and Brexit risks bite and people worry about the Fed tightening monetary policy. These fears may keep investors up at night with worry, but it is not impacting where they put their money, as chart 2 shows.

The second chart shows the Barclays US Corporate high yield debt – 10-year US Treasury spread, which remains close to its lowest level since 2014, and is looking remarkably stable. This spread, which measures the cost of capital for higher risk US corporates vs. the United States Government, usually spikes when risk aversion rises. The fact that it has barely moved even though risk indices have picked up, can tell us a few things about where asset prices may go in the coming weeks.

What this dichotomy tells us:

• A sell off in risky assets will happen, just not yet. The fears in the markets are real and investors’ recognise them, however they may think of these risks as “sleeping bears” who are not ready to strike yet.

• This helps to explain why volatility has remained contained even in the face of what looks like serious market risk.

• It may also suggest that investor risk sentiment can be choppy, and shouldn’t be used to time market moves.

• When the Barclays high yield corporate credit spread vs. US Treasury yield starts to rise then investors should get worried.

• If this dichotomy between investor sentiment and asset prices persists then we could be in for a range-bound summer for the financial markets. 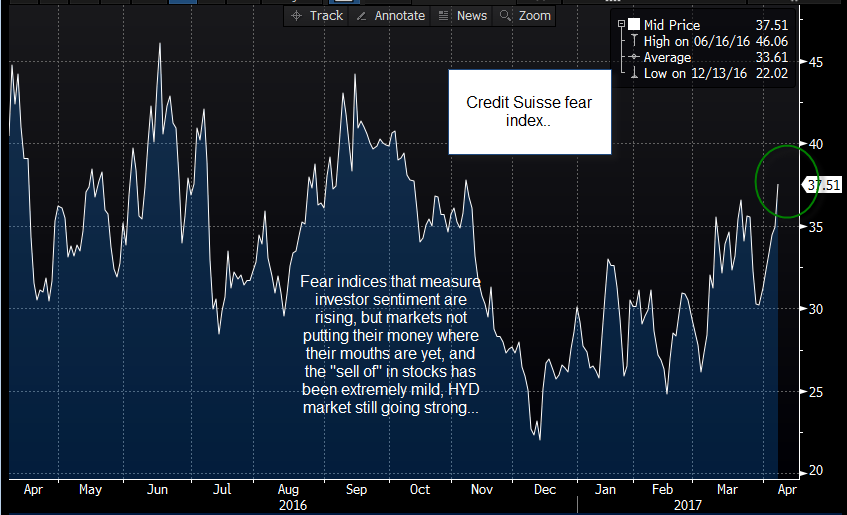