Risk ON as Italian concerns ease

What a difference a day makes. As if yesterday didn’t happen, risk was back on the menu today after a renewed effort by Italy’s political parties to form a coalition government eased investor nerves.

What a difference a day makes. As if yesterday didn’t happen, risk was back on the menu today after a renewed effort by Italy’s political parties to form a coalition government eased investor nerves. While the situation is far from being resolved, and major differences between the leaders of the populist parties remain, the fact that they are holding talks to form a coalition government means a new election could be avoided which should calm investor nervous a little. Boosting expectations that there may be a breakthrough in the situation was headlines out earlier that Italy's 5-Star has apparently called for Savona to withdraw his candidacy for economic minister in order to allow a government to be formed.

Reflecting the positivity in the markets, the major global stock indices have rallied with the US Russell 2000 surging to a new all-time high. Benchmark bond yields in the UK, Germany and US rose as demand for safe haven debt fell. Italian yields eased back a little owing to improved sentiment.

The rising German bond yields helped to lift the euro, which found further support from surprisingly strong data in the Eurozone. Spanish CPI rose unexpected sharply from 1.1% to 2.0% y/y while German CPI also came in stronger at 2.2% vs. 2.0% expected. German retail sales climbed 2.3% month-over-month in April. However, French data disappointed with first quarter GDP expanding by a modest 0.2% and consumer spending dropping by a sharp 1.5% rather than increase as had been expected.

Also reflecting the improved sentiment and today’s overall stronger Eurozone data, the risk-sensitive EUR/CHF pair has rallied sharply, making back its entire losses from the day before. Today’s rally has actually helped the pair to create a bullish formation in the form of a false break reversal below the prior swing low at 1.1450. The failed break down attempt here suggests that the buying pressure has outweighed the selling and that rates are therefore more likely to go up than down from here. However, if the EUR/CHF goes back below the noted 1.1450 level and hold below it then this would invalidate this bullish outlook. 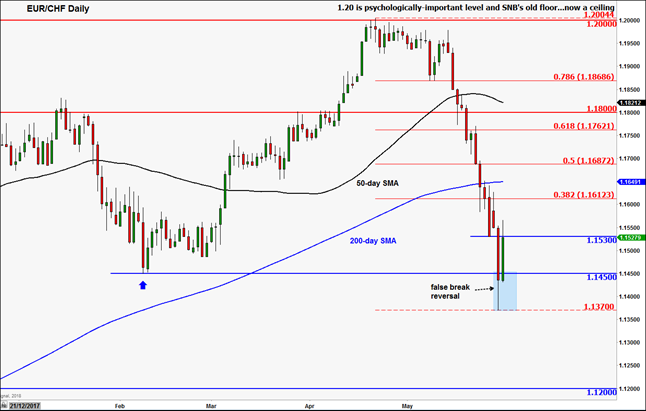