Risk on or risk off? Silver rises come rain or shine

Is it really "risk-on" today, or are the sellers just taking a breather after what must have been a very rewarding period for them? In other words, are the buyers back in numbers or are the sellers just easing off the gas? While no one can answer these questions with certainty, it is likely that today’s apparent "risk-on" trade is a combination of the two: bargain hunting and profit-taking. This is what makes silver the more appealing of the two major precious metals. On the one hand, silver tends to follow the safe-haven yellow precious metal at times of high uncertainty. Other times, when the movement in the US dollar is taken out of equation, silver can correlate positively with risky assets such as stocks and copper. That is because the "grey" precious metal has many industrial uses, too. At the time of this writing, the precious metal was trading at a good $17.80 per troy ounce after recovering from earlier losses which saw it momentarily dip below $17.55. With gold being lower, silver was therefore benefiting from the general improvement in risk appetite. It will be interesting to see if the metal will be able to extend its gains if risk aversion were to rise once again.

From a technical perspective, silver looks poised for further gains. As can be seen from the daily chart, below, the precious metal has been making a series of higher highs and higher lows throughout 2016. As a result, the moving averages are now all pointing higher and reside in the correct order for a bullish trend. In addition, following last week’s Brexit vote, silver formed a large bullish engulfing candle on its daily chart on Friday. So far, it hasn’t moved outside of Friday’s range but the fact that it is holding near the highs does suggest that a break out, rather than a break down, may be the more likely outcome as far as silver’s next move is concerned.

The precious metal now needs to clear through sturdy resistance around the $17.85-$18.00 area, where it had struggled previously. If successful, then there are little further immediate reference points to watch until the long-term resistance zone between $18.45 and $18.70 (previously support). Within this region, we also have the convergence of the 127.2% Fibonacci extension level of the most recent corrective down move with a trend line. Thus, it is an ideal profit-target area for the buyers, and maybe an ideal location for the sellers to step in also, at least in the short-term anyway. It would be very bullish however if resistance there turns out to be mild.

Meanwhile the sellers will be looking for the breakdown of some support levels on silver now. One such level is at $17.55, which was tested earlier today and held as support. Below this level, there is just thin air until the next prior reference point at $17.15 and should silver break below this level too then a more significant sell-off could be on the way. 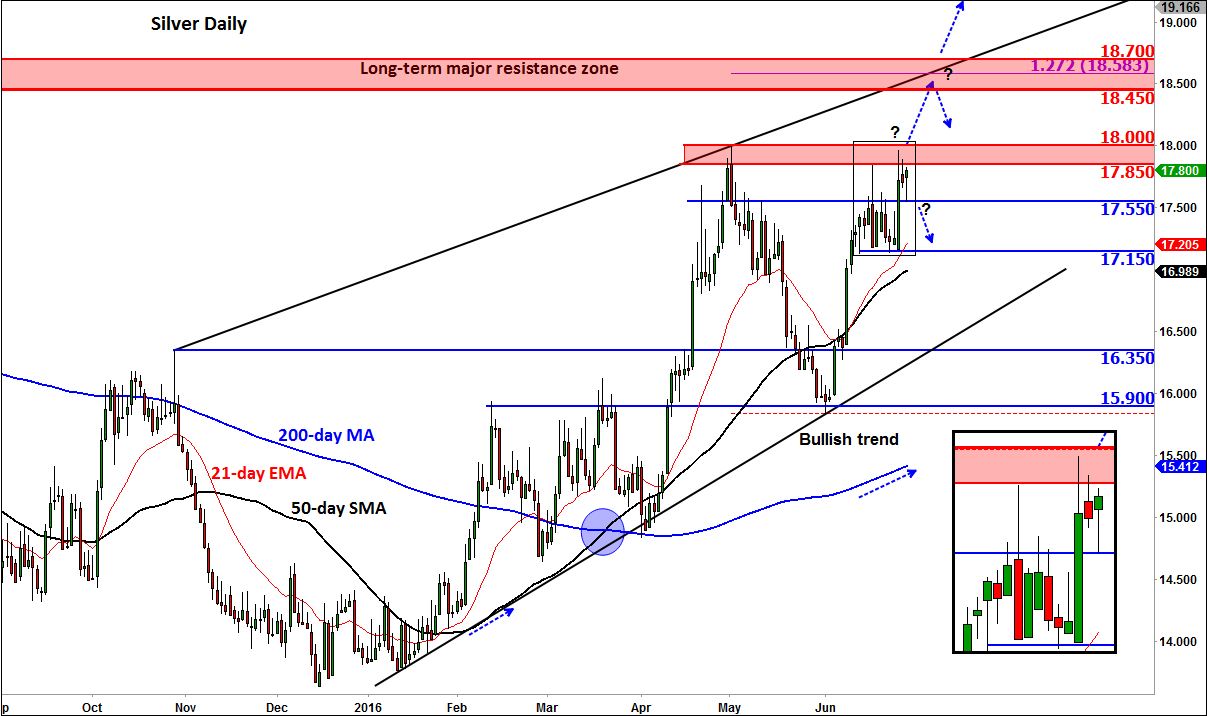