Royal Dutch Shell earnings preview: what to expect from Q4 and FY results

Royal Dutch Shell shares will be under the spotlight later this week when it releases its latest set of results that are likely to show 2020 was a tough year for the oil giant.

When will Shell’s Q4 results be released?

Notably, Shell is due to provide an update on its strategy on February 11.

Shell earnings consensus: what to expect

2020 was tough for the oil industry as the pandemic and lockdown restrictions severely reduced demand for oil and gas, causing prices to plunge. Average oil prices in 2020 were down by almost one-third from 2019, while natural gas prices were down around 17%.

That will take a toll on the industry’s results for the year, including Shell’s. Analysts are forecasting steep declines in earnings in both Q4 and for the full year.

Notably, Shell’s results will follow on from its peer BP releasing earnings this week, revealing it sank to heavy losses during 2020 as the pandemic weighed on prices and it booked large write-offs against its exploration assets.

The focus will be on the results considering Shell is holding a ‘comprehensive strategy update’, including a ‘full financial outlook’, on February 11.

In October, Shell unveiled a new framework for how it allocates capital to ‘reduce debt, increase distributions to shareholders, and allow for disciplined growth as it reshapes its business for the future of energy’ after it set ambitions to become net-zero carbon by 2050.

This will involve Shell reducing net debt to $65 billion from the $73.5 billion it had on the books at the end of September. That will be partially completed by funnelling $4 billion worth of asset sales to its lenders each year. Once debt is low enough, Shell will aim to distribute 20% to 30% of cashflow from operations in dividends and grow payouts annually by about 4% through both dividends and share buybacks. Cashflow from operations is expected to fall to $34.24 billion in 2020 from $42.17 billion in 2019. Current consensus expectations suggest that will rise to $38.88 billion in 2021 and then to $43.57 billion in 2022.

On top of dividend commitments, Shell is aiming to spend $19 billion to $22 billion in capital expenditure each year going forward.

Shell is aiming to produce between 2.27 million and 2.35 million barrels of oil equivalent from the upstream unit in Q4.

Shell is aiming to sell 4.0 to 5.0 million barrels of oil products per day in Q4 and to deliver refinery utilisation of 72% to 76%.

Operating income on a current cost of supply (CCS) basis from oil products is expected to fall to $968 million in Q4 from $1.50 billion the year before. However, profit should edge higher for the year as a whole to $6.42 billion from $6.23 billion.

Shell is targeting to sell 3.6 million 3.9 million tonnes of chemicals in Q4 and to deliver manufacturing plant utilisation of 77% to 81%.

The chemicals unit is expected to deliver operating income on a CCS basis of $291 million in Q4, swinging from a $65 million loss the year before. Annual profit should rise to $872 million from $741 million in 2019.

RDSB rallied strongly from its historic low in November of 845 hitting a peak in early January at 1467 before rebounding lower more recently.

The share price has fallen below its 20 and 50 sma on the daily chart and the RSI is supportive of further selling as it sits below 50 but above oversold territory of 30.

However, 1250 has offered strong support since mid-December. A break below this level is needed for a deeper selloff to 1085 swing low 16th Nov. 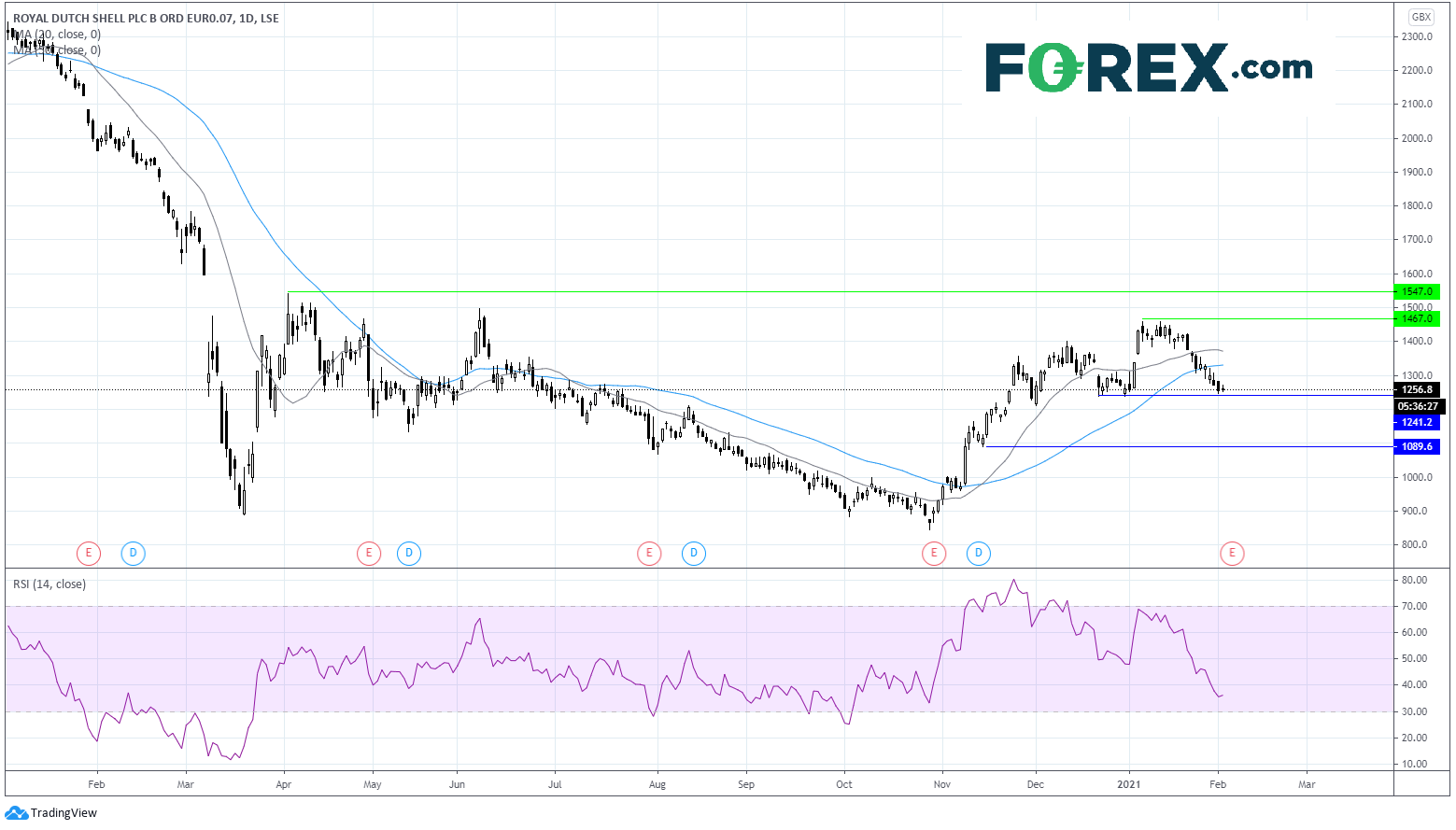 You can trade Shell shares with Forex.com using spread-bets or CFDs, with spreads from 0.1%.