As we go to press, stocks and crude oil prices were off their lows as the sellers eased off the gas ahead of the weekend. The European markets had started Friday’s session on a downbeat note, weighed down by a slump in share prices of carmakers while miners were lower due to a slightly weaker oil price.  The winning streak on Wall Street came to a halt on Thursday as the Dow fell back below 18,000. After a good run of form, profit-taking was probably one of the biggest reasons behind the sell-off in the US markets with many investors closing out their profitable positions ahead of key earnings from the likes of Apple, Facebook and Google. Although the first quarter US earnings season got off to a bright start with banks in particular reporting better-than-expected numbers, a few companies reported weaker earnings on Thursday. Meanwhile a forecast of falling chip shipments by Qualcomm weighed heavily on Apple shares on fears of reduced demand for its products. Apple is now more than 20 per cent below its 52-week high, so it is in the official bear market territory. After the closing bell on Wall Street, Google’s parent company Alphabet published its quarterly results, as did Microsoft and Starbucks. Although Alphabet reported rising earnings and revenue, both numbers still disappointed the high expectations. Its shares declined about 5-6 per cent in afterhours trading. Earnings from Microsoft and Starbucks also disappointed, which weighed further on US index futures.

In addition, crude oil prices fell along with other commodities as the US dollar rallied. The greenback found support on Thursday from news US weekly jobless claims declined to their lowest level since 1973. This was a rare piece of good news from the US where economic data has been very soft lately. In addition, the euro fell after the European Central Bank President Mario Draghi sounded slightly more dovish at the ECB’s press conference, while the yen slumped on a report from Bloomberg that the Bank of Japan may consider offering financial institutions a negative interest rate on some loans. The resulting USD/JPY rally and EUR/USD sell-off helped to underpin the Dollar Index and undermine some buck-denominated commodities.

In Europe, carmakers took a drubbing on Friday morning amid the on-going emissions saga. Daimler said it has opened an investigation into its emissions testing process after the US Department of Justice approached the owner of Mercedes-Benz last week with questions about its process for testing diesel engines. Daimler’s shares dropped almost 7% on Friday and weighed heavily on shares of VW and BMW, causing the German benchmark stock index, DAX 30, to slide about 0.8 per cent. Separately, Peugeot shares fell sharply after anti-fraud investigators on Thursday raided the French carmaker.  This is all part of the on-going investigations linked to the VW emissions scandal from last year.

Companies in focus next week:

Heading into next week, European carmakers should therefore be watched closely for if their share prices fall further then the major equity indices here could come under renewed pressure. Of course, next week is a big one as far as US corporate results are concerned so the earnings calendar should not be forgotten about either. There will also be some major UK-listed names which are also reporting their results next week as shown below:

As well as a busy earnings calendar, the economic calendar for next week is populated with some top-tier data which should provide plenty of volatility for FX traders. As for as the stock market participants are concerned, not all of next week’s data will be relevant however, except perhaps the German Ifo Business Climate (Monday), US Consumer Confidence (Tuesday), and the initial estimates of the first quarter GDP from the UK (Wednesday) and US (Thursday). Among next week’s central bank meetings, the Federal Reserve, on Wednesday, will garner a lot of the attention. But it is highly unlikely to announce any new policy changes, though the wording of the FOMC statement should nevertheless offer a few clues in terms of when the next rate increase is likely to be. If the statement conveys a dovish message then this should be good news for stocks, while a more hawkish than expected statement may be deemed negative for the markets. Meanwhile, the Bank of Japan’s policy decision is on Friday and it too is unlikely to make any changes. But speculation that it may be considering negative interest rate loans could see the Japanese stock markets outperform Wall Street shares until at least the policy meeting is out of the way on Friday.

Will the rally slowdown?

While no one knows what will happen in the future, it is important to note a few things. The way in which the US markets have rallied over the past few months suggests that a breakout for the S&P 500 is more likely than a breakdown from its two-year range, especially given the on-going supportive fundamental environment: low and negative interest rates and in some cases QE from major central banks; low inflation globally and low and falling unemployment rates in Japan, Britain and the US. What’s more, oil prices are stabilising and this should continue to support commodity stocks. But the upcoming US earnings could start to disappoint the already low expectations now while the emissions scandal in Europe could really snowball. On top of this, we are heading towards May, a month which typically marks the start of a period when the markets ease off and trade in ranges until the end of the summer. Moreover, the UK-EU referendum is approaching and not many people will want to be heavily-exposed to risk before the outcome of the vote.

So, there are plenty of reasons that could at least cause the US stock markets to pause here. As the S&P 500 approaches the top of its 2-year trading range, the odds of a pullback increase accordingly. Will we see some sort of a sell-off or consolidation near these highs, or will there finally be a decisive breakout? The weekly chart of the S&P 500 shows that the index is still technically not in an upward trend as it has made lower highs and lower lows inside the long-term range. This week’s test of the long-term bearish trend line and resistance around 2100 saw the index momentarily break above it before dipping back below. But the v-shaped recovery from the double bottom low of 1820 looks very bullish and with the weekly RSI still not at "overbought" levels of >70, there may be further juice left in this rally to fresh all-time highs.

Meanwhile the daily chart of the S&P shows a negative divergence on the RSI. This in itself is not bearish but a warning sign for the bulls: so far, there has been no confirmation in the shape of a candlestick pattern for the bears. Traders should nevertheless watch some short-term support levels closely such as those shown on the chart: 2088 and 2075. If these start to break down then we may see the selling pressure grow. But traders should note that previous episodes of corrective trends this year have been very shallow and short in duration. This shows strong bullish momentum. So a pause here may actually be a positive development as it will allow the RSI to unwind from overbought levels through time rather than price. Meanwhile the rising 50-day moving average is about to climb back above the 200 to create a "golden crossover." This would be a further bullish development. In short, the bulls may wish to proceed with some degree of caution now while the bears should continue to remain nimble and wait for their opportunity. 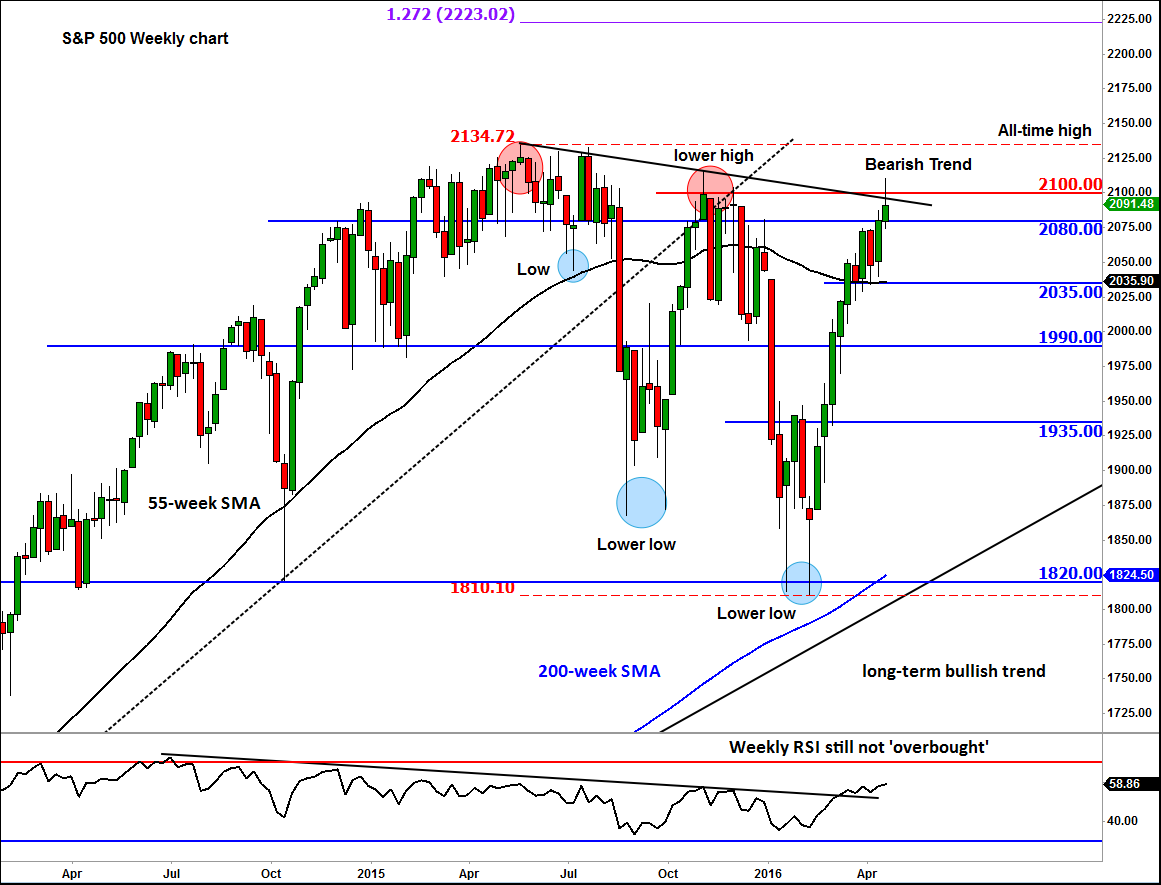 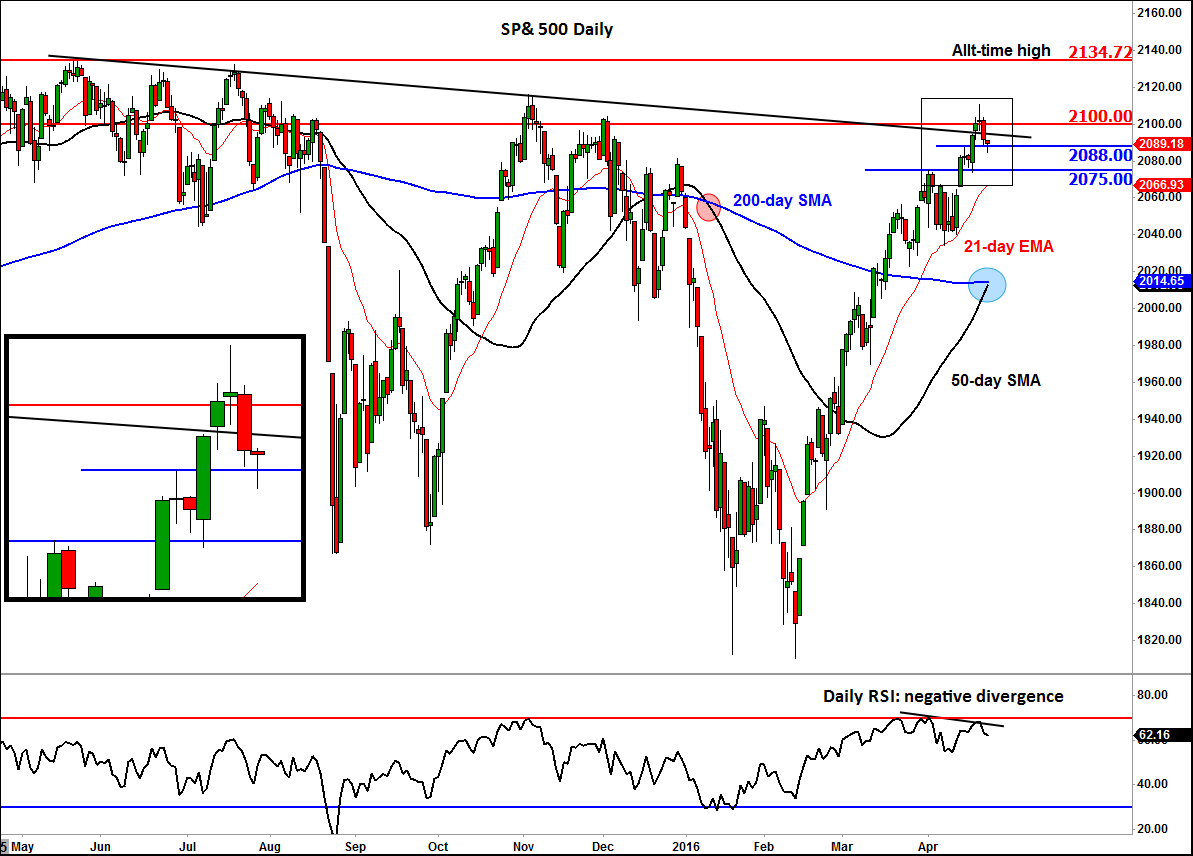