<p>Despite a weak-but-still-better-than-expected retail sales report out of the UK and a smattering of second-tier US data, yesterday’s global market trends have generally carried over into today’s trade: the US dollar is edging higher, commodities (prominently including oil) are falling, and global equities are edging lower once again. </p>

Despite a weak-but-still-better-than-expected retail sales report out of the UK and a smattering of second-tier US data, yesterday’s global market trends have generally carried over into today’s trade: the US dollar is edging higher, commodities (prominently including oil) are falling, and global equities are edging lower once again.

Focusing in on the S&P 500 index, the slight dip over the last two days actually has done some meaningful short-term technical damage. For the first time since last month’s 1-year low, the widely-watched index has fallen below a sharp near-term bullish trend line, suggesting that the rampant buying pressure we’ve seen of late may be disappating. Though price is always the most important indicator, it’s also worth noting that the secondary indicators have been deteriorating as well. Both the MACD and RSI have rolled over in recent days, confirming the breakdown in the S&P 500 itself.

Of course, even if a bullish trend line breaks, it does not necessarily suggest an imminent shift to a strong bearish trend; instead, the short-term trend might simply turn sideways, or even to a more gradual bullish trend. For instance, if the index finds support at its 200-day MA near 2015 early next week, near-term bulls will remain confident in an eventual test of the previous highs near the 2100 level. On the other hand, a break below the 2000-2015 zone could signal that a more serious dip is likely, with interim bearish targets at the Fibonacci retracements (not shown) of the February-March rally near 1960-5 (38.2%), 1930 (50%), and 1900 (61.8%). 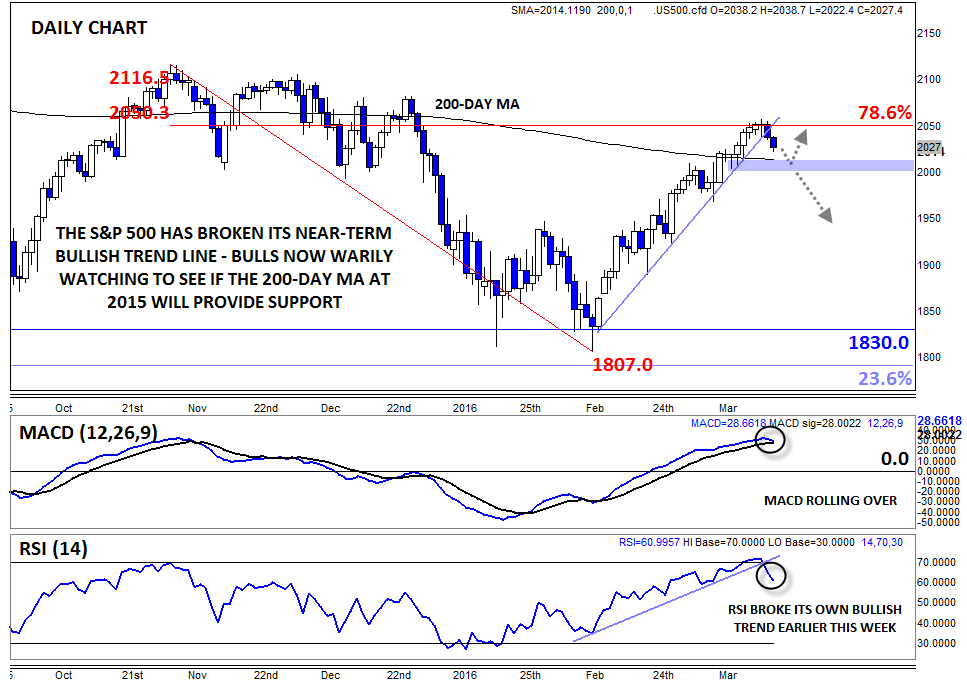