Despite today’s slight pullback in risk assets, the start of 2019 has been very good for equities, commodities and government bond prices.

US investors will be back from a long weekend break today, knowing they have missed very little yesterday. At the time of writing, US stock index futures were trading just below Friday’s closing levels, tracking weaker European markets. Elsewhere, precious metals have gained further ground, while oil has seen little upside follow-through since Friday. In FX, the USD/JPY has rebounded after slight weakness at the back end of last week; the EUR/USD has once again failed to stay above that 1.13 handle and the GBP/USD has struggled to push north of 1.29 amid ongoing Brexit uncertainty. Commodity dollars have weakened along with European equity prices.

Despite today’s slight pullback in risk assets, the start of 2019 has been very good for equities, commodities and government bond prices. The big rally in global equity markets has been led by the US, while Europe has lagged behind slightly. The upsurge in commodities has been led by crude oil, followed by copper and gold. There are two common denominators behind the markets’ strong performance year-to-date: (1) growing optimism over a trade resolution between the world’s largest economies and (2) speculation that major central banks will keep interest rates low for even longer.

Not only have we recently seen the Fed turning dovish, but there are no signs of an imminent rate increases from the likes of the BoJ, BoE and RBA. Indeed, there are now serious doubts that the ECB will tighten its belt in Q3. For that reason, we have seen government bond prices rise and yields fall across the board, which has caused mixed performances in the FX markets with no clear leader among G10 currencies.

Central banks have turned dovish because of concerns over the health of global economy. One major source of uncertainty has been a move towards protectionism, especially in the US. But with the latter potentially on the verge of agreeing a trade deal with China, this has reduced those concerns slightly. Still, the damage might have already been done. Incoming data has been rather poor from some regions of the global economy, not least the Eurozone and in particular Germany. German bund yields have dropped, which has weighed on the euro.

It is possible that US yields could also weaken further as we have seen some warning signs from the world’s largest economy lately, as well. Although there were pockets of strength in some areas of the economy, last week’s data releases from the US were overall disappointing. Among other things, we had a weaker-than-expected inflation report, an unexpected slump in retail sales and a drop in the latest industrial production data.

Further weakness in government bond yields could underpin the lower-yielding and noninterest-bearing assets such as gold and silver even more profoundly going forward, although equities cannot ignore a deteriorating global economy for too much longer. Sooner or later, stock market investors will have to consider the impact on company earnings of a slowing global economy. On top of this, the positivity regarding a potential US-China trade deal will soon be fully priced in. 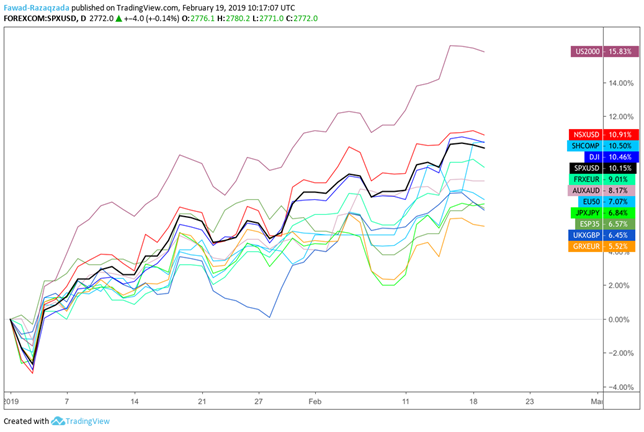 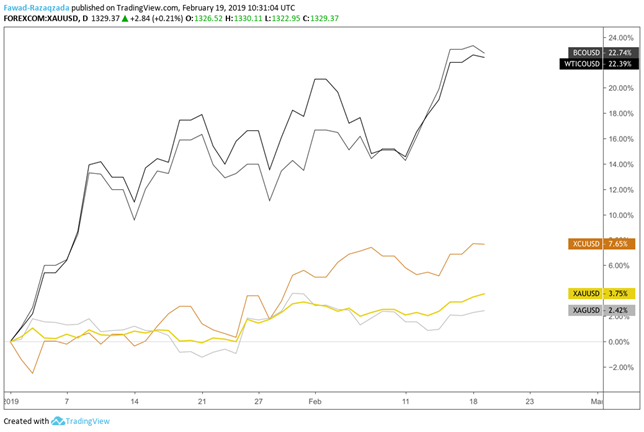