After an eventful week, sentiment among market participants has evidently improved. Perceived safe haven assets like gold, Japanese yen and Swiss franc, have all come under pressure in recent days, while the global stock indices have bounced back after last week’s falls.

After an eventful week, sentiment among market participants has evidently improved. Perceived safe haven assets like gold, Japanese yen and Swiss franc, have all come under pressure in recent days, while the global stock indices have bounced back after last week’s falls. Granted, we are not totally out of the woods yet, and equity prices remain overstretched on historical basis, but there’s definitely fewer reasons for investors to fret over than at the start of the week. After all, there’s now urgency from North Korea to denuclearize and Donald Trump has agreed to meet Kim Jong-un face-to-face by May. On top of this, both Mexico and Canada have been spared from the harmful impact of the US tariffs on aluminium and steel imports – at least while they negotiate NAFTA terms. China and the European Opinion are among the economic regions that will pay the penalty for exporting these metals to the US. However, the US has allowed its allies to apply for exemptions and it would be a major surprise if the EU chose not to. So, it looks like Trump is back-peddling a little after a number of Republicans voiced concerns he was alienating the nation’s closest international partners, who had threatened to retaliate. But there’s no guarantee that the EU will be granted an exemption. On the contrary, the EU and China could retaliate and trigger a so-called trade war.

ECB and BOJ in no rush to tighten monetary conditions

Meanwhile, both the European Central Bank and the Bank of Japan have made it clear that they are in no hurry to tighten their respective monetary policies, especially the BoJ. This is a welcome relief for some stock market participants who were the concerned about the prospects of rising interest rates. While interest rates will eventually rise, it looks like the ECB and BOJ want to be extra sure before they start tightening their belts. Following the central bank meetings, the euro and yen have weakened and if they remain low then this should be good news for company earnings and exports.

Talking of exports, the stronger euro has been part of the reason why German exports haven fall the most in seven months. In fact, German data has been far from rosy in recent times. As well as the disappointing 0.5% drop in exports in January, today we also found out that the nation’s industrial production unexpectedly fell 0.1%. Yesterday we found out that German factory orders plunged by 3.9% month-over-month, while last week it as revealed that retail sales had unexpectedly fallen by 0.7% in January. In France, too, recent economic data has turned somewhat negative, as evidenced, for example, by the 2.0% drop in industrial production in January. Industrial production did rise in the UK by 1.3% month-over-month. However, this was still below expectations as manufacturing output rose only by 0.1%. But even more disappointing was UK construction output. It plunged 3.4% in January, while the annualised rate fell at its fastest pace since March 2013, down 3.9%. These macro pointers are likely to discourage the European Central Bank and the Bank of England from raising interest rates prematurely, as the soft data may weigh on inflation expectations.

US and Canada jobs data up next

Today’s focus will be on jobs data from both North American nations. The consensus expectations for Friday’s headline non-farm payrolls data point to around 200,000 jobs added in February. This would be more or less in line with January’s better-than-expected data. The unemployment rate is however expected to have fallen to 4.0% from 4.1%, while average hourly earnings are expected to have increased by 0.2% after January’s higher-than-expected 0.3% increase and December’s upwardly revised 0.4%. My US colleague James Chen has already written a preview for the NFP HERE. Meanwhile Canada’s employment is expected to have bounced back, rising 21,300 after last month’s 88,000 drop (which was due a massive decline in part time jobs, which outnumbered the full time job gains).

The obvious currency pair to watch is the USD/CAD today. Not only because of the simultaneous release of employment data from both nations, but also because of the exemption Canada has received from the US in terms of metal exports, which should be – and has been – CAD-positive.  However, in these situations, it is better to isolate the two currencies as the simulators data release could cancel the impact of each other, leading to a volatile spikes in either direction. Thus, traders may wish to look for opportunities in a CAD cross and/or a different USD pair, such as the USD/JPY.

The USD/JPY has broken its short-term bearish trend line following the BOJ meeting and amid easing of tensions between North Korea and the US. If the US jobs data turns out to be better than expected, the USD/JPY’s rebound could turn into a full on rally. However, in the event of significantly disappointing numbers, the USD/JPY could drop back towards the 105.00-105.55 key support area. But as things stand, the near-term path of least resistance is to the upside now following break of the bearish trend line and resistance at 106.40. The bulls would want to see this level hold as support now. It would be very ideal if the USD/JPY goes on to break through the next resistance levels at 107.30/5 and 108.05 area. The first of these two levels was the low back in 2017, while the other level was a previous support. If these levels are cleared then the technical outlook on the USD/JPY would turns bullish. 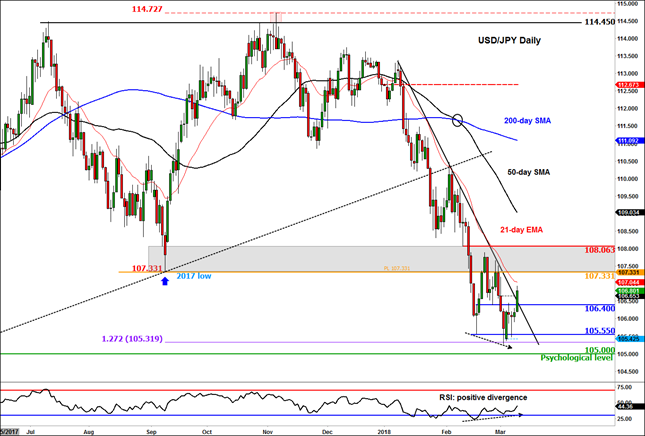