Silver arrives at key support ahead of BoJ and Fed meetings

Gold and silver have been largely out of favour since the end of the first week of September. The dollar selling paused and US equity indices hit repeated new all-time highs despite raised geopolitical tensions stemming from North Korea.

Gold and silver have been largely out of favour since the end of the first week of September. The dollar selling paused and US equity indices hit repeated new all-time highs despite raised geopolitical tensions stemming from North Korea. But precious metals could be on the verge of a comeback ahead of key central bank decisions from the Bank of Japan and US Federal Reserve, and as they test key technical levels. If these central banks turn out to be more dovish than expected then this may boost the appeal of the noninterest-bearing assets while a likely weaker US dollar would provide additional support for the buck-denominated metals. Conversely, if the Fed in particular turns out to be more hawkish than anticipated then precious metals may extend their falls further. Out of the two metals, silver looks the more interesting one from the technical standpoint. It has reached a key support area between $16.90 and $17.10. This area was formerly resistance and is where both the 50- and 200-day moving averages come into play. If this area now holds as support, we could see the resumption of the bullish trend that started after the metal flash crashed below $15.65 in early July. Otherwise a deeper pullback could be on the cards. But given the overall bullish structure of price action, we are now on the lookout for bullish patterns to emerge at these levels. 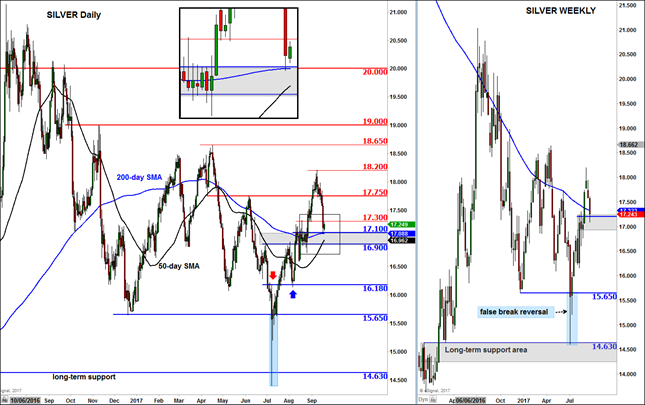