The pressure has been building for silver to explode higher in recent months and today it is finding itself up a good 2.8 per cent at $16.70 per troy ounce. The significantly weaker dollar has helped to underpin several buck-denominated precious metals and commodities of late, including gold, silver and crude oil. The US currency has depreciated because of receding expectations about interest rate rises this year. According to the Fed Fund Futures, the likelihood of a rate hike by December is now only 50 per cent. Other major central banks have also either turned more dovish or maintained their extremely loose policy stances. This has boosted the appeal of precious metals across the board since they are non-interest-bearing assets. In addition, Chinese demand fears have receded in recent times owing to an improvement in data. This has been especially helpful for silver, which, as well as being a precious mental, has several industrial uses, too.

What’s more, the relatively lower prices of silver compared to, say, gold, also appeal to some long-term investors who probably reckon that the downside is limited for the grey metal. Indeed, speculative interest in silver has been growing rapidly in recent times, as evidenced by strong inflows into silver-backed Exchange Traded Funds and rapidly rising net long positions in the futures and options markets. In fact, in the week to 12 April, net long positions in silver were increased by a good 30% to a record high 56,000 contracts, according to the CFTC.

While the upsurge in bullish positions suggest the correction potential is now high, the breakout of silver above the key resistance in the $16.10-$16.35 range means the rally could be sustained for some time yet (even if the momentum indicator RSI is also above the ‘overbought’ level of 70). Actually the breakout may even encourage some investors who had been sitting on the side-lines to join in now. Until and unless silver falls back below the now $16.15-$16.35 support range, the path of least resistance remains to the upside. As such, the metal can extend its gains towards the Fibonacci levels shown on the chart, such as the $17.00/10 area which corresponds with the 127.2% extension of the last significant downswing from October’s high to the recent low. 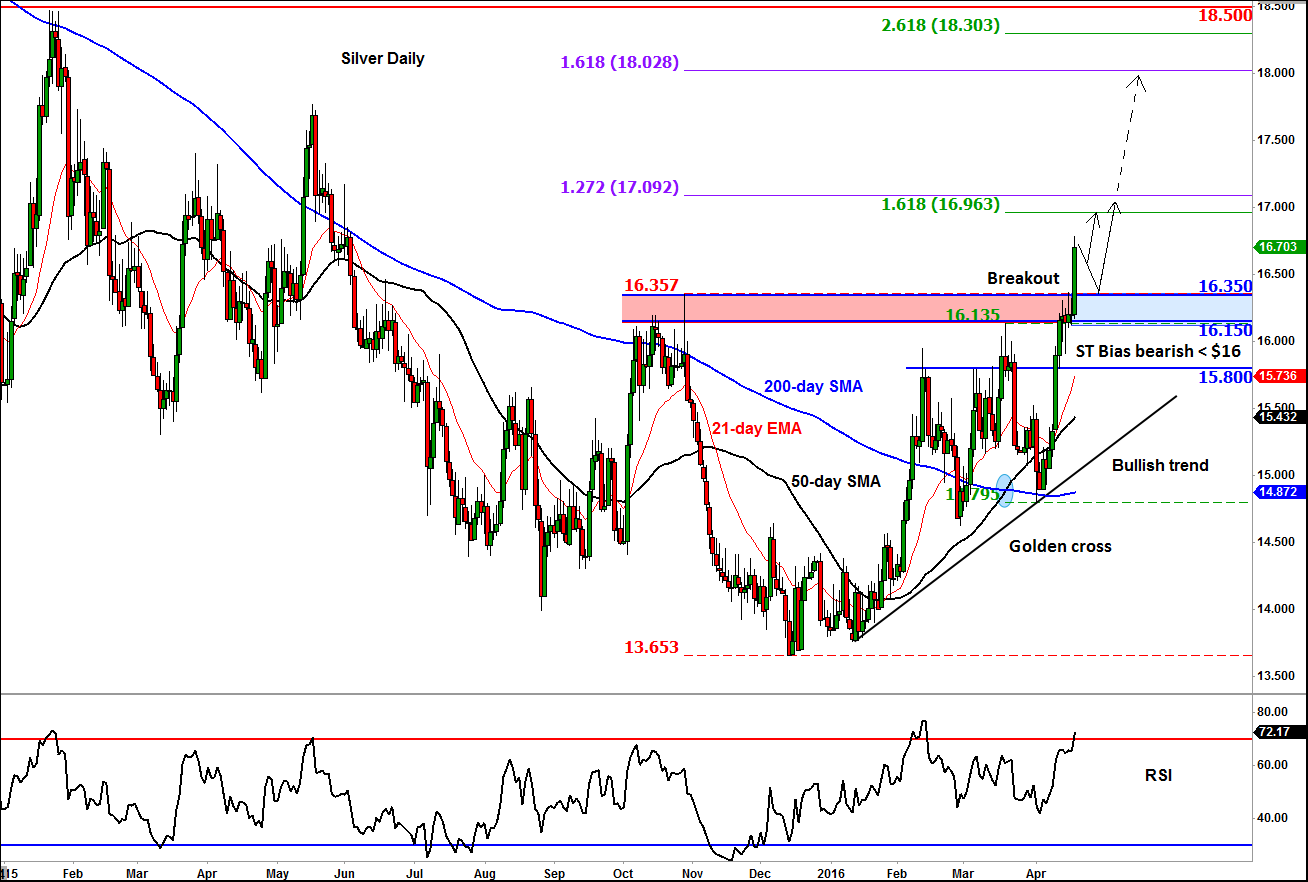