Silver shines as commodities rally across the board

It has been another good day for commodities, even if the dollar has rebounded modestly against some of the major currency pairs. Crude oil prices have advanced another 4 per cent to fresh 2016 highs on the back of a report that said Saudi Arabia and Russia have agreed to a production freeze ahead of the much-anticipated meeting between the OPEC and some non-OPEC members on Sunday. Gold, which had rallied strongly yesterday, turned modestly lower as safe haven assets took a backseat while equities rallied alongside oil and copper.  The other key precious metal, silver, was however able to extend its gains for the fourth day. The grey metal, also used in industrial processes, managed to climb to a fresh high for the year and momentarily surpassed the high of $16.15 per troy ounce it hit in March.

Going forward, gold traders will be watching the direction of the stock markets which could potentially turn very volatile now that the earnings season has started. The upcoming Chinese data releases (trade figures on Wednesday; GDP and industrial production on Friday) will likely have an impact on commodities across the board. In addition, gold and silver traders will be following the dollar and therefore US data closely, in particular Thursday’s inflation figures which could have an impact on the potential timing of the next rate increase, especially with oil bouncing back strongly.

Indeed, the Fed's Harker today said that if energy prices move up quickly, it is possible that the central bank will have to be more aggressive in raising rates. Traders should therefore be wary of the possibility that the dollar could find its feet again, while the whole commodities complex could come under pressure from renewed demand fears out of China. For crude, the big risk event is Sunday’s meeting of OPEC and some non-OPEC producers in Doha where they are likely to agree on an oil output freeze. Although this outcome is mostly priced in, the announcement, if seen, may still lead to further gains for oil as some of the doubters will be proven wrong.

The technical outlook on silver has been looking increasingly bullish and a breakout above the $16.15-35 resistance area appears imminent. Recently, the metal broke above its 50- and 200-day moving averages, which are now in the "correct" order. The former has turned higher and the latter is flattening.  A breakout, if seen, could see the metal rally towards the Fibonacci extension levels shown on the chart. Meanwhile some of the key short-term support levels that will need to hold now include $15.95 and $15.80. If the latter breaks down then there are not much further supports seen until $15.50, below which is the 50-day moving average (at $15.30) and then bullish trend line. 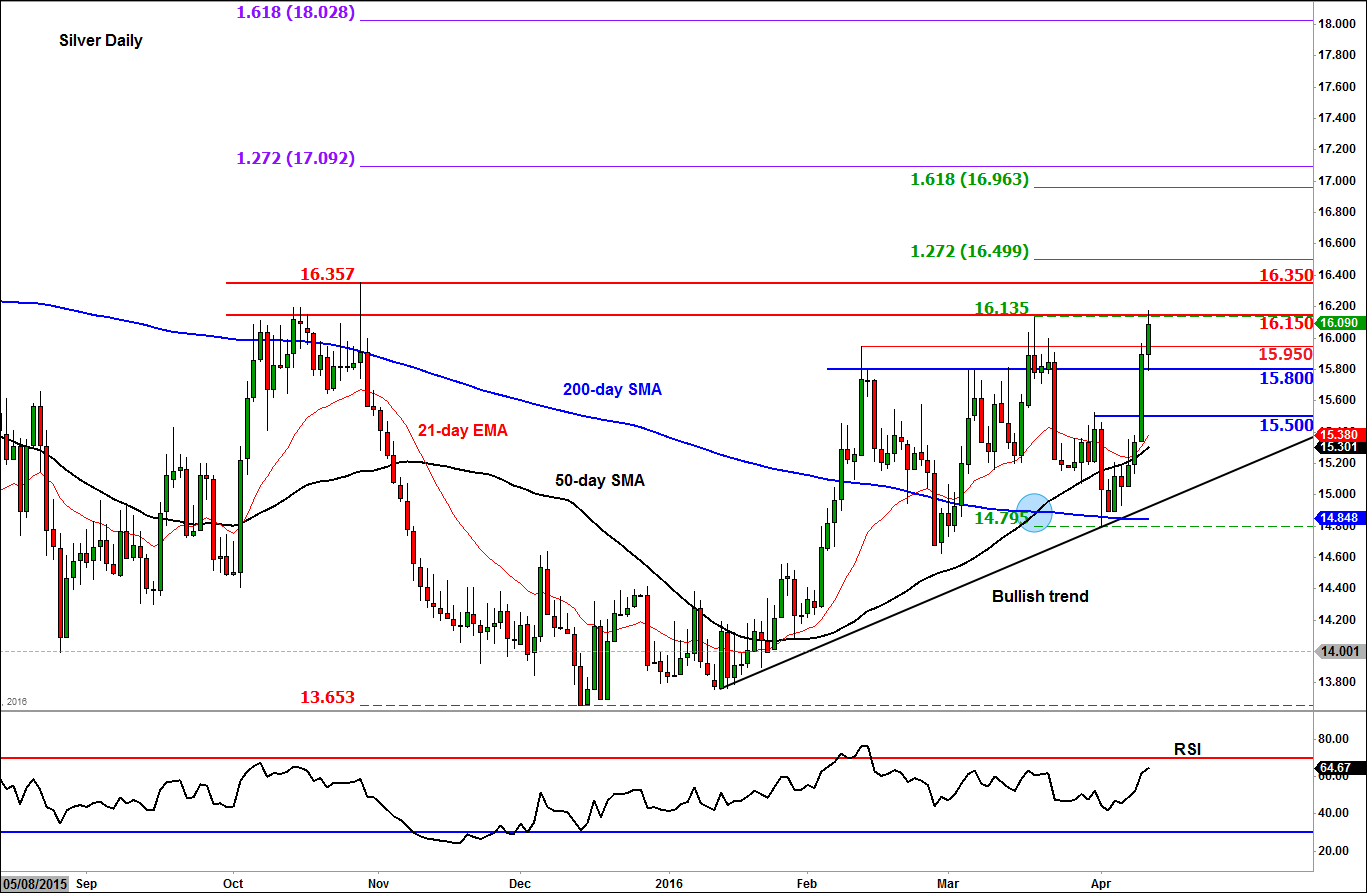