Precious metals have found strong support over the past couple of days, with gold surging back to $1340 and silver to $20.00 per troy ounce.

Precious metals have found strong support over the past couple of days, with gold surging back to $1340 and silver to $20.00 per troy ounce. The US dollar has weakened while benchmark government bond yields have fallen across the board once again. This is mainly due to a slightly more dovish Federal Reserve and as the Bank of Japan announced new set of policy measures aimed at extending its quantitative easing programme in order to overcook inflation. The lower government bond yields have boosted the appetite for racier assets like equities, while at the same time they have made precious metals – which, unlike bonds and stocks, pay no interest or dividend – appear more appealing to investors on a relative basis.

Because of the fact that the central banks’ decisions have triggered a “risk-on” response in the markets, silver has actually outperformed gold, as the latter is deemed more of a safe haven commodity than the former. Unlike gold, silver has many industrial uses, so it tends outshine the yellow metal at times when risk assets are rallying. As a result, the gold/silver ratio has fallen below 67, its lowest level since early August. With the chart of the gold/silver ratio making lower lows and lower highs, I am expecting silver to continue outperforming gold.

Silver itself has had difficulty breaking through the $20 handle in the past. But the long-term trend has turned more favourable for bullish speculators this year after the precious metal broke through a major downward-sloping trend line in February before staging a sharp rally as the dollar’s rally came to a halt. Silver has subsequently been making higher highs and higher lows. It looks like the metal has now made another higher low at around $18.25-$18.50, which was previously a significant support and resistance area. For as long as silver holds above this area, the path of least resistance is likely to be to the upside. But silver does need to break through the $20 area soon if it is to extend its gains meaningfully now. Should it be able to do so, which is our base case scenario, then at least a revisit of this year’s high at $21.10/15 area would then become very likely. 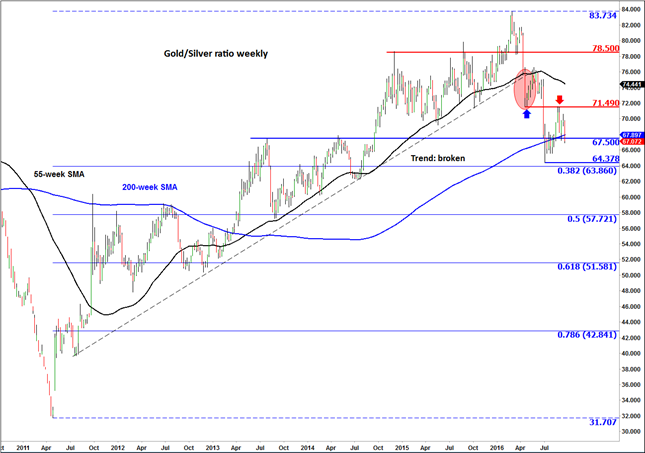 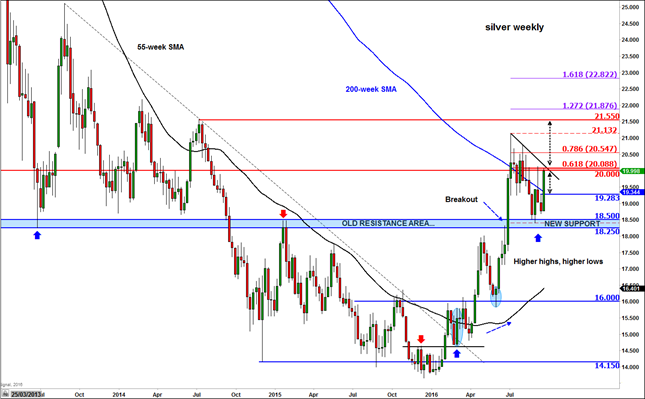