On the face of it, this is really good news for the pound, perhaps not so good for UK stocks in the short-term as it reduces the odds for further rate cuts from the Bank of England. What we need to see now is some sustainability in the data, as this could just turn out to be a typical rebound after panic in the immediate aftermath of the Brexit vote. Also, the full economic impact of Brexit cannot be measured just a few months after the vote – let’s see how businesses and households will react when the UK does eventually leave the EU, probably in a couple of years from now. But the markets move at the speed of light, so this may be a worry for another day.

This morning though sterling shone as it rose to as high as 1.3375 against the dollar. But with the FX markets being void of any major US economic data due to the Labor Day holiday there, European traders don’t appear to be going for home runs today. Indeed, after the initial rally, the Cable was quick to relinquish most of its earlier gains to trade around 1.3325 at the time of this writing. That’s not to say of course that pound will not bounce back again later on in the day.

In fact, the GBP/USD appears to be generally rising inside a short-term bullish channel, so the path of least resistance is to the upside now. This Cable’s initial bounce this morning ran into some offers in the 1.3350-70 region (shaded in red on the 4-hour chart), which was previously resistance. It will be interesting to observe what happens next. If the Cable were to rise beyond this resistance area then the top of the bullish channel could be the next immediate target for the bulls – above this, not much resistance is seen until the psychological level of 1.35. But the “Brexit gap” above 1.3535 and below 1.3675 has still not been ‘filled’ yet, so the potential is there for an even larger rally. However, if the GBP/USD retreats back below 1.3300, it will re-establish its bearish trend line that it has only just broken. In this potential scenario, price could drop towards the potential support levels shown on the 4 hour chart in blue. The bears will take heart from the fact that the RSI is still diverging negatively with price (lower highs vs. higher highs). Nevertheless, the monthly chart shows the Cable may be in the process of forming a long-term low. Thus overall, things are looking positive for now. 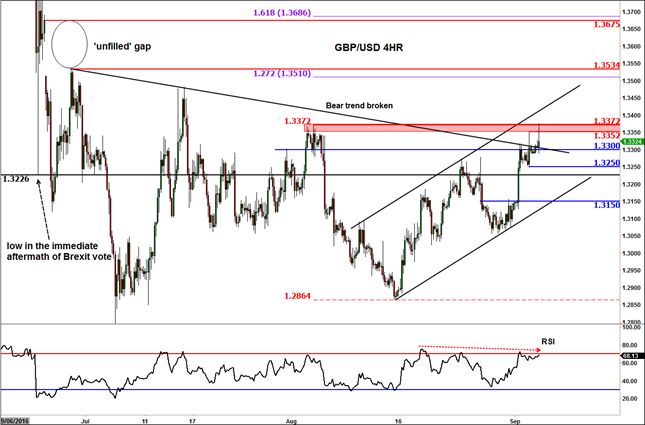 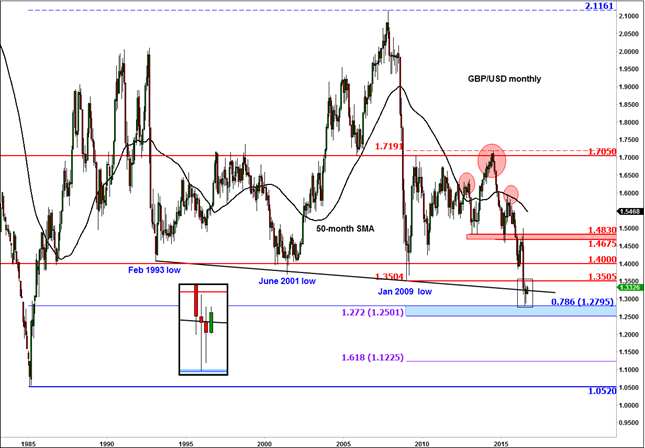