Concerns that the US is headed for stagflation weighed on sentiment yesterday, which has placed AUD/JPY back onto our bearish watchlist.

A combination of weak earnings and housing data fanned concerns of stagflation in the world’s largest economy. Building permits – a leading indicator of economic health – fell -3.2% m/m, which was its weakest print since September. And to add to the fears was Target’s (TGT) profit warning which resulted in the stock plunging -25%. The Nasdaq fell over 5% for the second time since the pandemic and Wall Street was broadly lower. 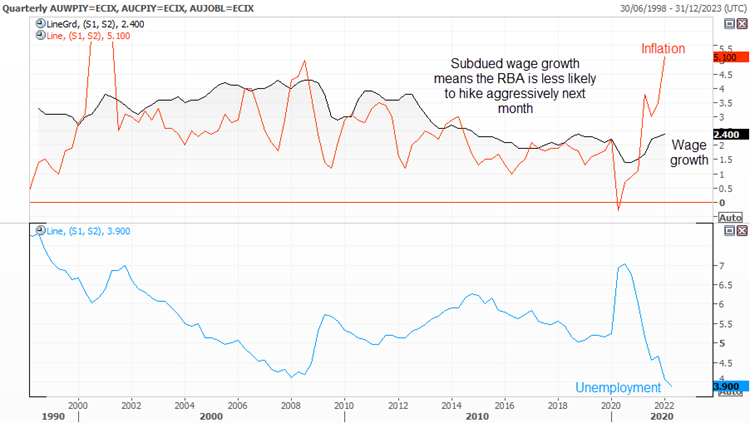 And this has put AUD/JPY back onto our radar. If we go back a couple of days there was hope that the RBA would hike by 40-bps. Yet softer-than-expected wage growth means this is now looking less likely and helps with potential bearish setups on AUD/JPY.

Yesterday’s wage data – which missed the mark – also removed some of the sparkle from today’s employment report. Which is a shame because unemployment hit a record low of 3.9%, even if headline employment underwhelmed. But ultimately, we do not think today’ report moves the needle much for the RBA.

It is wage growth that now needs to excel to convince the RBA that inflation will remain ‘sustainable’ and force them to hike more aggressively. Yesterday’s wage data miss means they’re more likely to raise by 25 bps, and not the 40-bps traders had hoped for. 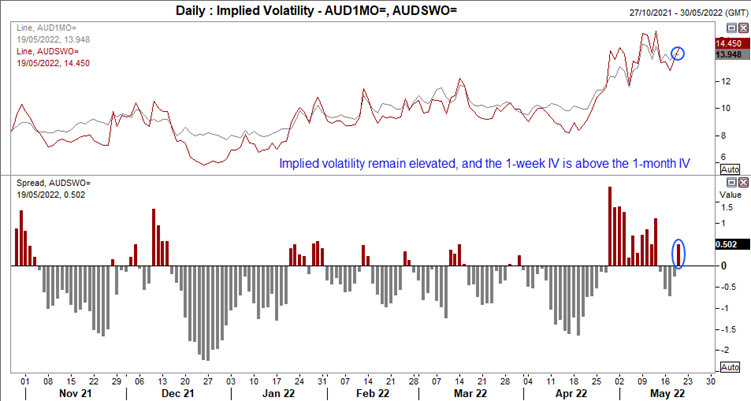 On the 6th of May we said to “keep an eye on AUD/JPY with sentiment on the back ropes” ahead of its next leg lower. And it didn’t disappoint. The currency cross has fallen over -8.8% since the April high and over -7% since the May high. 1-week implied volatility (IV) for the Australian dollar has risen above the 1-month IV which shows investors remain. And with sentiment once again on the back ropes it remains a cross to watch for further declines. 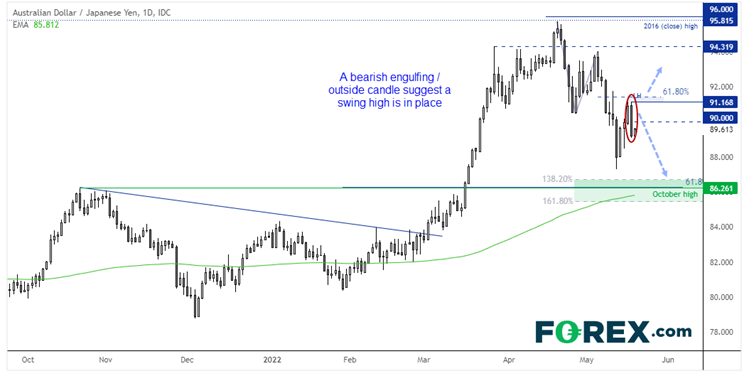 We can see on the daily chart that AUD/JPY has seen a 3-wave move which began just beneath the 2016 high / 96.00. Yesterday produced a bearish engulfing (and outside) day to suggest a swing high is now in place, just below a 61.8% Fibonacci retracement level.

A wider trade deficit from Japan helped the yen to catch a bid today, so prices are now retracing within yesterday’s candle. Our bias remains bearish beneath yesterday’s high so looking to fade into such moves to increase the potential reward to risk ratio. Perhaps we’ll see a reversal pattern on an intraday timeframe around 90 which we could consider. At which point the initial target would be 88 (just above last week’s low) then down to the 88.50 area, near the October high, 200-day eMA and Fibonacci projection levels.