Stock Market Performance Since the Last US Election

What about market performance since the election in 2016? Read on to discover what the past four years mean for your portfolio moving forward.

(1) History reveals unique trends about the stock market performance during presidential election years and beyond.

According to the widely-followed “Presidential Election Cycle” the stock market generally underperforms in the first half of a US President’s 4-year term and performs best in the second half of the term.

Why do we see this effect? Generally, analysts attribute the phenomenon to political agendas taking time to influence the economy and fiscal/monetary stimulus that is utilized to boost the odds of re-election of the incumbent.

As of 2016, the returns by year in the presidential cycle were as follows, per Charles Schwab:


Crucially, this pattern is has historically held regardless of which party controls the White House and Congress. As the chart below shows, the stock market has historically rallied in the second half of a president’s term under Democratic, Republican, and split leadership: 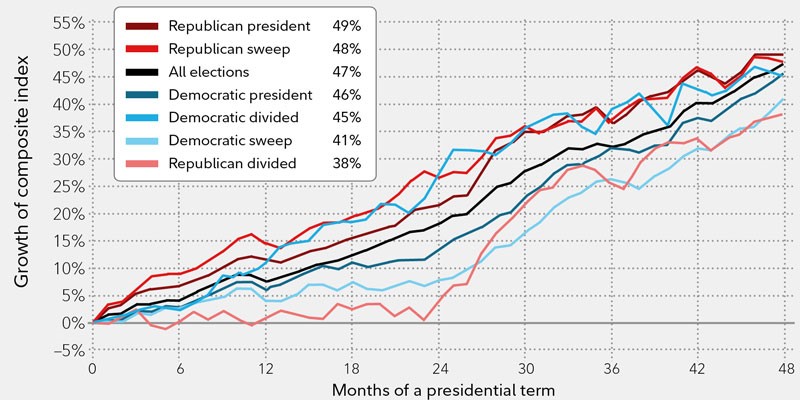 While this tendency has been historically reliable, it’s worth noting that the sample size (every four years) is small, and markets are constantly evolving, so we recommend that traders utilize other tools and strategies to complement any election-focused research.

Excluding dividends, the S&P 500 rose 19.4% in 2017, fell -6.2% in 2018 (though much of that drop took place in December and was quickly reversed), rose 28.9% in 2019, and has gained about 5.2% year-to-date in 2020 as of writing on 10 September. For more on how specific stocks and other financial indicators have performed since Trump’s inauguration, readers are encouraged to check this “Trump Tracker” from Business Insider (note that it hasn’t adjusted for recent stock splits in AAPL and TSLA, so the overall results are even more impressive in those names).

(3) Past performance & your portfolio: Listen & learn from historic precedent.

Interestingly, the correlation between the stock market and elections may flow both ways. Specifically, the performance of the S&P 500 over the final three months before election day has been a remarkably consistent predictor of which party wins the election. As the chart below shows, when the stock market has seen positive returns in the three months before election day the incumbent party has usually won, while a negative 3-month return before the election has historically favored the challenging party; this pattern has been correct a remarkable 20 out of 23 times (87%) since 1928! 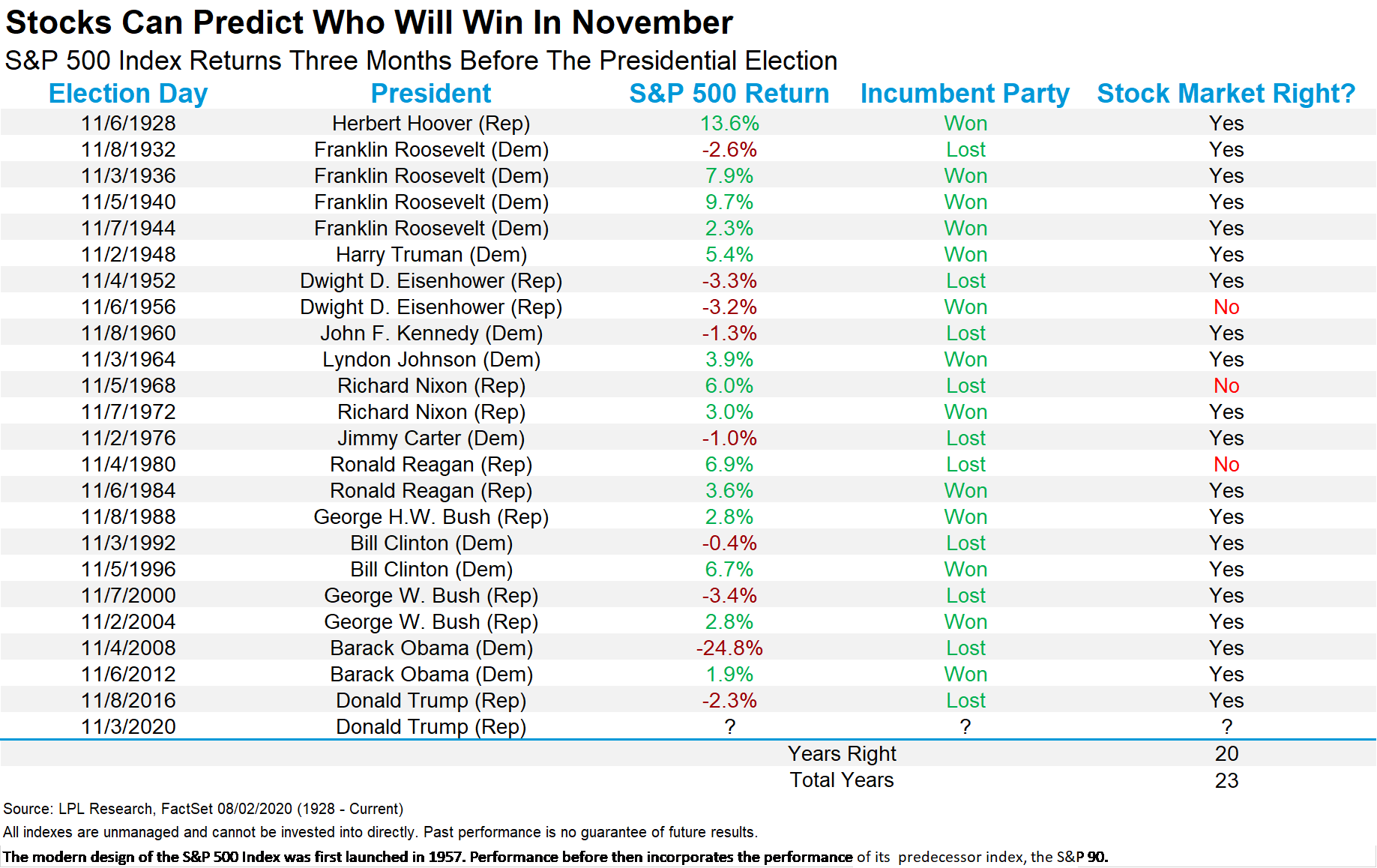 With the clock already ticking on the final three months of President Trump’s term, perhaps election analysts should be keeping a closer eye on the stock market!

In any event, business and economic cycles tend to outlast a single US presidential term, so readers should be sure to keep a long-term mindset. As we’ve noted repeatedly, one of the biggest mistakes a trader can make is to let their personal political opinions impact their trading. By focusing on historical tendencies and a well-defined, objective trading strategy, readers can maximize their chances of successfully navigating the 2020 election and beyond.

If you’re curious how we can help you become more comfortable and confident with your trading through these volatile times, please reach out today!