Stocks, dollar calm ahead of US data

Today’s publication of jobs, wages and manufacturing data should provide investors plenty of indications about the health of the world’s largest economy

Today’s publication of jobs, wages and manufacturing data should provide investors plenty of indications about the health of the world’s largest economy, which, in turn, could impact the probabilities of future interest rate changes and therefore the values of the dollar and stock markets.

At the time of writing European indices were flat after falling on Thursday with US index futures also being little-changed. Sentiment has been supported slightly as better-than-expected Chinese and UK manufacturing PMI data eased concerns over a global slowdown. In FX, the dollar was edging lower again, with the Dollar Index now down for the fifth consecutive day. With the dollar down and stocks slightly firmer, the New Zealand dollar, a commodity currency, was the top performer, followed by the pound.

Investors were looking forward to the release of the monthly US jobs report and the latest ISM manufacturing PMI data in the afternoon. It has been a relatively quiet day in terms of company earnings.

Data recap and look ahead to US data:

Will we see another set of disappointing US macro data?

The dollar, which experienced its roughest month since January 2018 in October, has remained largely on the back foot although understandably traders are in a wait-and-see mode ahead of the publication of the jobs report. The pressure was growing on the greenback for months prior to October’s decline given the Fed’s U-turn on interest rates earlier in the year and Trump’s repeated calls for big rate cuts. Although the Fed has been trimming interest rates, the 25 basis cuts have been less than what Trump has been calling for but generally in line with market expectations. But one of the big reasons why the dollar finally cracked last month was because of shockingly poor manufacturing data and a few months of slowing jobs growth raising concerns that the US has finally caught down with the global slowdown amid the trade war between the US and China and Brexit-related uncertainty among other risks. Although the Fed has signalled a pause in the cutting cycle, another poor set of macro data today could put a December rate cut back on the cards. 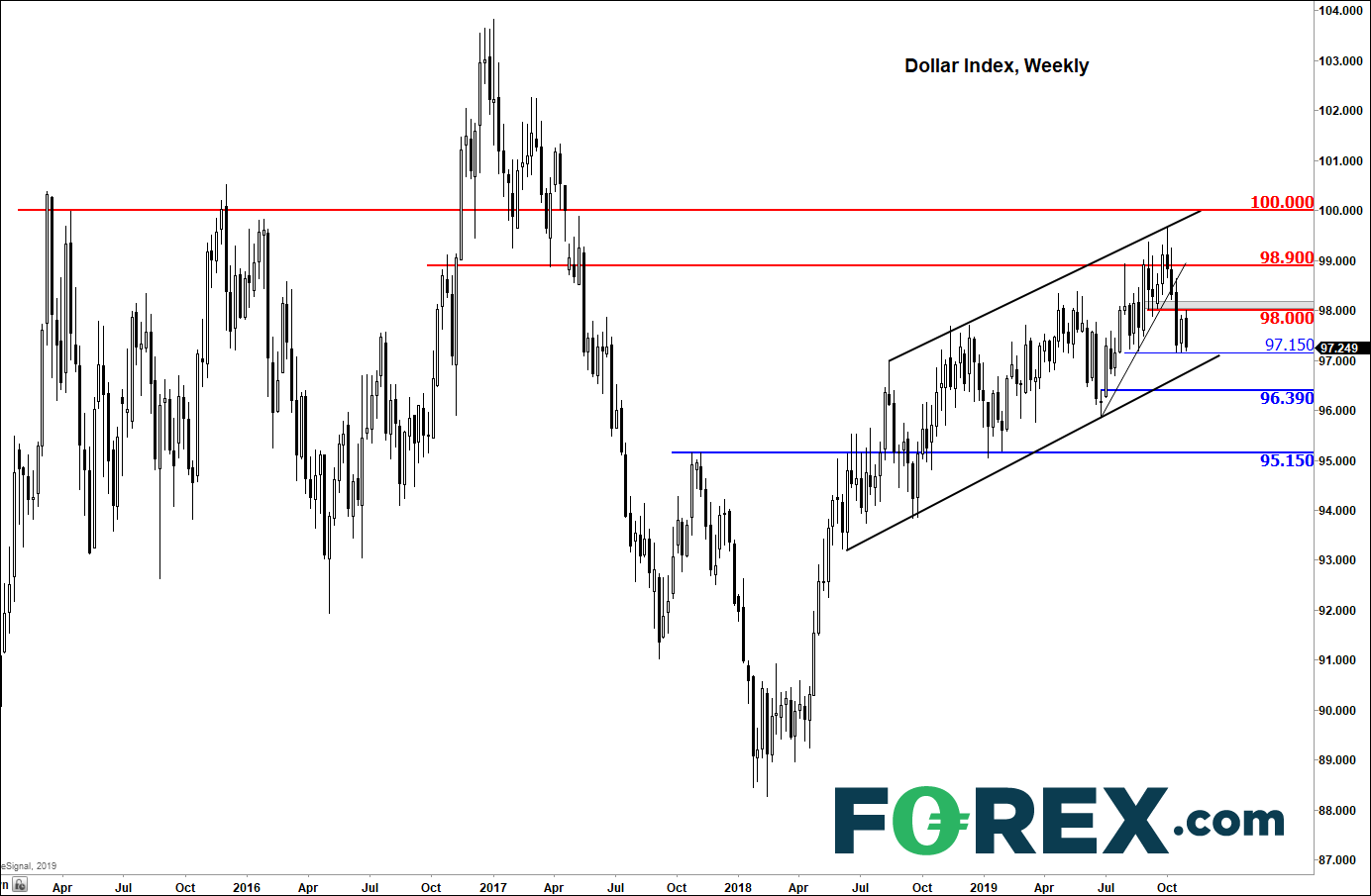 It is worth watching the Dollar Index given the recent bearish technical developments. The DXY broke below its short-term bullish trend line a few weeks ago, thereby ending the series of higher highs and higher lows. It has since been trending lower, making a couple of lower highs and lows. The index is now testing recent lows around 97.15, a break below which could pave the way for a potential drop to the support trend of the longer-term bullish channel, around 97.00, while the head of a weekly hammer candle which has not been re-tested on this time frame comes in much lower at 96.39. At this stage, the path of least resistance is therefore to the downside. But should the DXY break back above resistance in the 98.00 range, then that could re-instate the bullish bias.