This week’s inaction from two major central banks, namely the US Federal Reserve and the Bank of Japan, has caused the global equity indices – Japan’s Nikkei, in particular – and the US dollar to weaken as the yen and safe haven precious metals soared.  On top of this, weakness in US data persisted as fresh data showed the world’s largest economy grew only by 0.5% in the first quarter on an annualised format, which was less than expected. Japan’s economy fell back into deflation and household spending there slumped more than 5% in March compared to the same period in 2015. Meanwhile in Europe, the UK economy grew by a meagre 0.4% in the first quarter, although this was in line with the forecasts, while the Eurozone GDP expanded by a better-than-expected 0.6% in the first three months of the year. However, inflation was a weak point in the Eurozone as CPI fell back below zero, printing -0.2% year-over-year for April. Along with precious metals, oil prices repeatedly surged to new 2016 highs on the back of a weaker dollar and signs of a more balanced oil market on dwindling US crude production. So, commodity stocks outperformed globally.

In the US, it was a busy week for earnings with lots of tech giants, social networks and consumer discretionary names producing their quarterly results. Facebook’s solid earnings caused the social network stock to soar to a fresh record high, while Amazon posted its largest quarterly profit ever on Thursday, boosted from surging growth in its Web services division. But falling iPhone sales, revenue and profit was all bad news for Apple’s stock which moved further into the official bear territory. Other tech giants, including Google, Netflix and Twitter all reported disappointing numbers. As of Thursday morning, some 55% of the S&P 500 companies had reported their results. According to Thomson Reuters, overall earnings are set to decline by 6.1% in the first quarter compared with a year earlier. This is mainly due to the energy sector because of the earlier collapse in oil prices. Excluding energy companies, S&P 500 profits are still likely to fall by 0.5%. Meanwhile overall revenues are expected to drop 1.4%. If so, this would be the S&P 500’s third quarter of falling earnings, the longest streak since the global financial crisis. Worse still, revenues will have dropped for five straight quarters in a row.

Against this backdrop, it is difficult to see how the US markets will be able to break to fresh record highs. But the markets are forward-looking and expectations of better performance from energy companies is one big reason why the markets have held up this well. Added to this, the US dollar has weakened noticeably amid receding Federal Reserve rate hike expectations this year. The weaker dollar should help support US exports generally and boost profits and revenues realised aboard when exchanged back into the domestic currency.  Above all, these are not normal times due to all the central bank support in the form of low or negative interest rates and huge programmes of asset purchases designed to depress long-term yields. So, the focus is not entirely on earnings or the economy for that matter; many yield-seeking investors are thus forced to the higher-yielding stock markets in spite of the overstretched valuations.

Look ahead: irregular trading but plenty of data and earnings next week

But as we come to the end of another interesting week in the financial markets, European stock markets and Wall Street share were sharply lower at the time of this writing, following on from Thursday’s slump. Next week is likely to be another volatile one for the markets, although trading will be irregular as China and UK markets will be closed on Monday while Japan is out for most of the week and mainland European markets will be shut on Thursday. Nevertheless, there will be plenty of data from the world’s first and second largest economies to keep us busy:

In addition to the economic data, the earnings calendar will be busy, too, with some UK household names including Sainsbury’s, Morrison’s, Shell and HSBC, Randgold all due to report their results next week. From mainland Europe, Adidas, BNP Paribas, BMW, Ferrari, Deutsche Telekom, Commerzbank and UBS will be among the key ones to watch. The US reporting season will shift down a gear but Pfizer, Merck &Co, AIG and Verizon, should provide some fireworks.

Sell in May and go away?

We are now heading into the dreaded month of May when you will likely see a lot of "sell in May and go away" headlines. The month has not even started and the markets have already began to melt down a little. Whether or not the selling will continue into the new week remains to be seen, however. It will partially depend on the outcome of the abovementioned data and earnings. But before the retreat the markets had been severely overbought, so a pullback was on the cards anyway. While this could be the start of a big sell-off, we can’t ignore the on-going impact of central banks’ support in the form of extremely loose monetary policy stances and QE. Since these stimulus programmes were launched, every minor or major dip has ultimately proved to be decent buying opportunities.  Will this be another such occasions? Added to this, there is still no end in sight for the rallying oil prices which continue to hit new 2016 highs. If the trend continues then energy stocks could provide further support for the major indices, such as the UK’s FTSE 100 or Australia S&P/ASX 200.

But if the stock markets fall, the German DAX index could be the one to watch next week, because of the upcoming Chinese figures and also the impact of the EUR/USD exchange rate which has appreciated to 1.1450. The slightly stronger euro bodes ill for European and German exports. Thus, if next week’s US data continue to disappoint expectations then the EUR/USD could surge higher, which could exert further downward pressure on the DAX and other European indices.

The DAX began its retreat on 21 April from around levels that makes technical sense: the 61.8% Fibonacci retracement against the December high, at 10390, and the resistance trend of the bullish channel. At the time, the momentum indicator RSI was also approaching the "overbought" threshold of 70. So the pullback could be mainly due to profit-taking from the longs rather than renewed selling pressure from the shorts. If so, the longs could soon reload their positions now that we have arrived at the first level of potential support: 10100, formerly resistance.  But the DAX’s stay above the 200-day moving average (10250) has again been short-lived, which is not a good sign. The last time we saw this false break above the moving average was at the end of last year, which preceded THAT drop in January. Worryingly, we are heading into May, a month that historically has not been kind to stocks. However, for as long as the DAX remains inside the bullish channel, we maintain our neutral/slightly bullish bias on the index. The support trend of this bullish channel comes in somewhere between the two next potential support levels: 9925 and 9795. The latter also corresponds with the 38.2% Fibonacci retracement against the most recent rally. The rising 50-day moving average resides in around the 9555/60 area, so this level should be watched too. A potential break down from the channel could target the 61.8% Fibonacci retracement and key support at 9340/75 area. 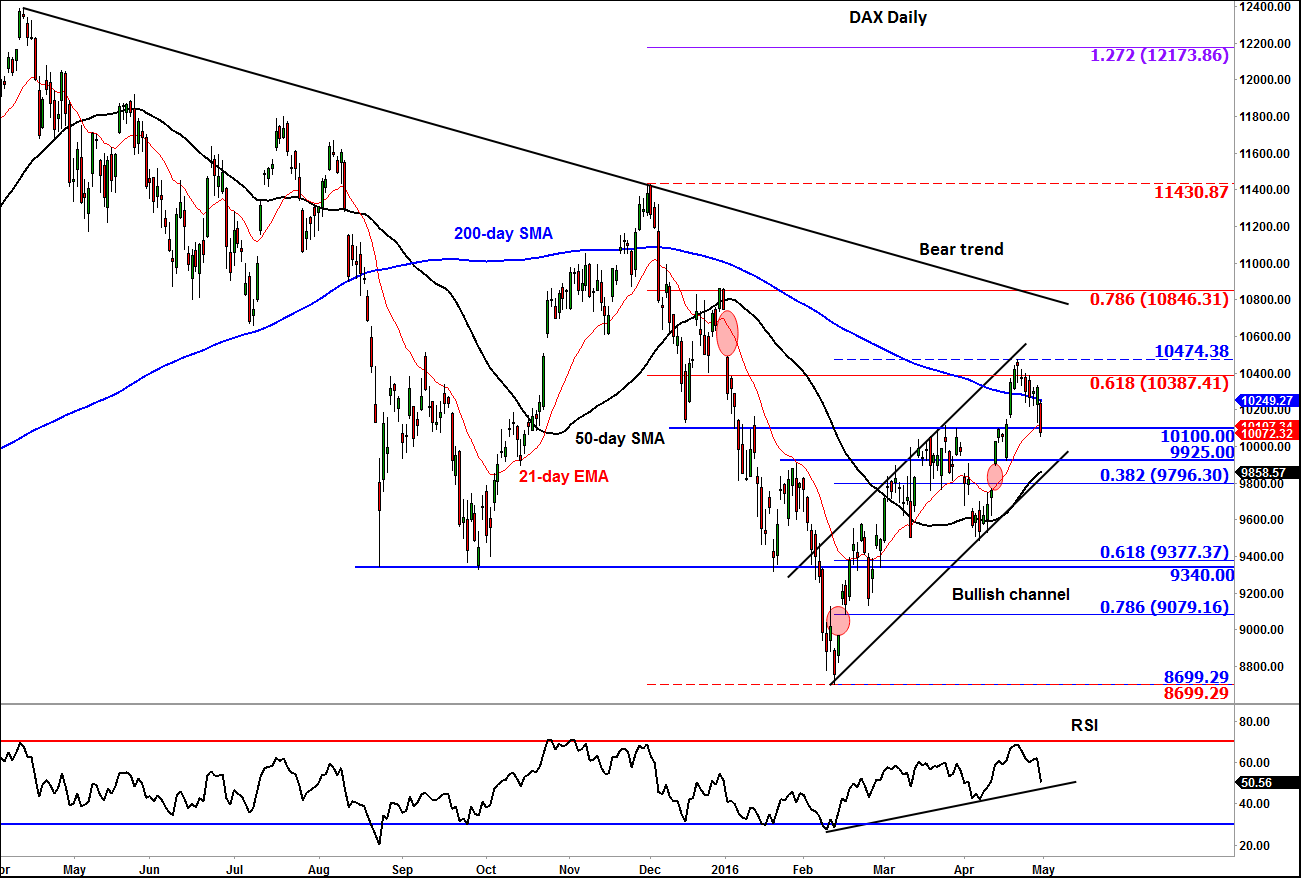