Stocks took a tumble yesterday and the losses carried forward to the start of today’s session with Asia closing in the red and Europe opening in the negative, before bouncing back slightly. US index futures have recovered some of their earlier losses.

Stocks took a tumble yesterday and the losses carried forward to the start of today’s session with Asia closing in the red and Europe opening in the negative, before bouncing back slightly. US index futures have recovered some of their earlier losses. Sentiment has turned negative towards stocks amid concerns that this earnings season could be a weak one, especially for technology companies whose valuations are still sky-high. On a macro level, ongoing concerns about the health of global economy have so far been offset by central banks either cutting or promising to trim interest rates. But unless growth starts to pick up, central banks’ actions will only help to delay the inevitable: a sizeable correction. However, it remains to be seen when that might happen, as the S&P 500 and other major indices are yet print a key technical reversal signal, despite this week’s sell-off.

After a positive start to the earnings season from banks, technology companies have let the markets down. This morning saw SAP SE, the German software giant, reported disappointing second-quarter profits and its shares dropped 6%. The Europe’s largest software company blamed ongoing US-China trade tensions for its poor performance. It comes after Netflix missed expectations yesterday, with the streaming company reporting a drop in US customers while growth overseas was much slower than anticipated. Also, IBM shares turned negative after reporting a forecast-beating profit yesterday, but its revenues declined for the fourth consecutive quarter. So, watch technology stocks closely as earnings in the sector have so far disappointed – and my colleague Ken Odeluga has prepared lovely previews for some of them HERE. Earnings will come in thick and fast. Among others, we will hear from Microsoft and Morgan Stanley today.

Meanwhile growth worries continue to mount. Japanese exports declined to -6.7% y/y in June, below consensus of -5.6% y/y, and down for the 7th consecutive month. This comes amid a recent flare in trade tensions between Japan and South Korea. The US and China are still far from reaching a trade truce, judging by Trump’s latest tariffs warnings. But US Treasury Secretary Mnuchin has said that Huawei is not the sticking point in China trade talks and that a call with China is planned for today. The hope is that the calls would eventually lead to a meeting. But we have been there before and the markets are tired of hearing same old news.

Despite this week’s sell-off, the S&P 500 retains its bullish bias for the time being for it has not created a lower low yet. Indeed, the index is sitting right at the top of a major support zone between 2941 and 2077. The upper end of this range ties in with the 21-day exponential moving average while the lower end was the high from last year. Thus, a move below here could potentially pave the way for a correction to at least the bullish trend line. But if support holds, then a rebound towards the key short-term resistance at 3000 could be the outcome. 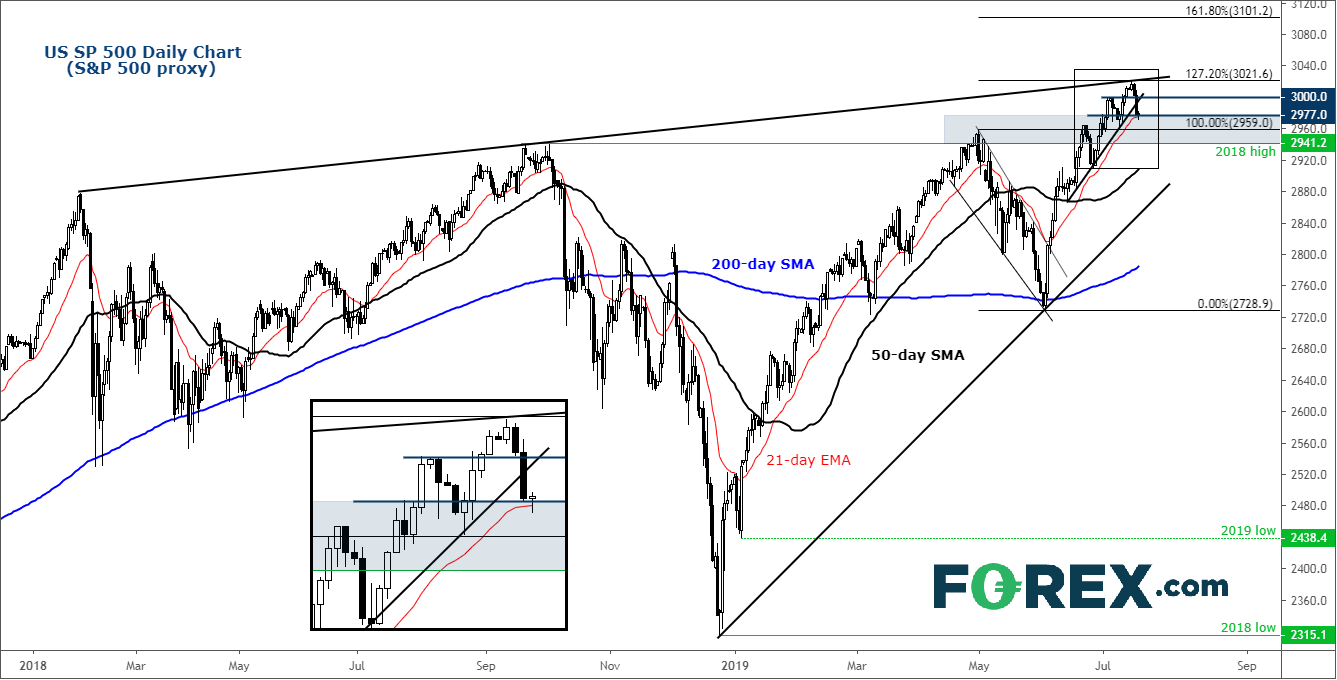