News that US President Donald Trump was planning to unveil an additional $200 billion in tariffs on China hurt sentiment yesterday and stocks fell sharply, especially in the technology sector. However, Asian and European markets more than recovered earlier today, lifting US index futures higher with them, on relief that the new tariffs will only be 10% as opposed to 25 per cent. Investors figured that with the yuan weakening noticeably in recent months, a 10% tariff is not too prohibitive on bilateral trade flows.

However, in the afternoon, global indices briefly gave back a big chunk of their earlier gains on the back of news that China was imposing its own 5-10 percent tariffs on $60B of US goods. Stocks initially fell on the headline because the US had already warned that it plans to impose tariffs on about $267 billion more of Chinese exports if Beijing were to retaliate.

But the selling pressure quickly eased once investors realised that it wasn’t really retaliation from China and that it wasn’t something totally unexpected as China's Commerce Ministry had already warned that it will be "forced to retaliate simultaneously." In fact, China’s latest move was measured and not over-aggressive as it now plans to impose 10% tariffs on US goods that it had previously listed for a 20-25% tariff rate. Likewise, the items that were listed for 10% will now only face a 5% tariff.

So it looks like China has blinked first, and this puts the US government in a great position to agree on a new trade deal. Indeed, the US government sees the latest tariffs as giving China “an incentive to have near-term, constructive discussions,” according to US Commerce Secretary Wilbur Ross. Let’s hope that is indeed the case because things could escalate if the two nations don’t find some sort of agreement before the start of next year, for then the US tariffs will be bumped to 25 per cent.

European shares have catching up to do

Looking ahead, trade developments will play a big part on sentiment going forward. But the markets, especially in the US, have done considerably well given everything that has been going on. In a way, Wall Street’s performance makes sense, given that the tariffs are seen as being positive for the US economy in the short-term. But the falls in Europe haven’t been too severe. The major indices here are currently down between 4.2 and 6.3 percent year to date. Granted, they are not up like between 5.3 to 16.0 percent as in the case of US indices, but they are also not down like 18.3 percent like China’s Shanghai Composite.  Thus, European indices have held their own relatively well and they could be the ones which may outperform when the tide turns as they play catch up with the US.

Out of the major European indices, the UK’s FTSE is looking quite interesting. With copper and oil rallying today, commodity-linked stocks are leading the way. Indeed, Glencore, Fresnillo, Anglo American and Antofagasta were among the top gainers today, while defensive names were at the bottom of the index. If commodities manage to gain further ground then the FTSE could stage a sharp recovery in the days to come.

From a technical perspective, the FTSE has held its own well around 7250, which is a key support area. As can be seen from the chart, the area around this level is where the index was previously finding resistance from. Once resistance, it is now offering support. In addition, the 61.8% Fibonacci retracement level also comes into play here. But we do need some confirmation to suggest that it is indeed the buyers stepping in around these levels that have helped to halt the FTSE’s decline, rather than the sellers merely taking profit. On that point, a daily closing break above short-term resistance at 7320 would probably be the confirmation we are looking for. Should this happen then we think that the FTSE’s next move will be to climb to the next level of resistance, old support, at 7430, before deciding on its next move. Conversely, a clean break below that 7250 level could pave the way for a much deeper correction. But our base case is that the FTSE will bounce here rather than resume slide. 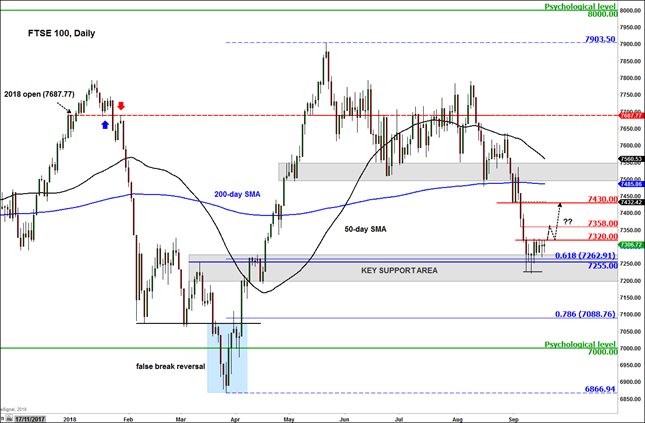