Stocks start last week of September on the back foot

Apart from the German Ifo Business Climate – a closely-watched composite index based on surveyed German manufacturers, builders, wholesalers and retailers – which showed a slight improvement in September, news over the past couple of days hasn’t been kind for the stock market bulls. For a start, Turkey’s rating has been downgraded to junk by Moody’s which has cited rising risks due to its external financing needs and slowing economic growth behind its decision. On top of this, a survey of 100 business leaders by accountancy firm KPMG showed that the vast majority would consider moving their headquarters or operations outside Britain due to Brexit. In response, the local stock markets in Britain and Turkey have fallen on Monday, along with the pound and Lira.

Also undermining the appetite for risk is the upcoming events in Algeria and the US. In Algeria, the International Energy Forum meetings are being held over the next three days. Market participants will be looking for clues on whether Saudi Arabia and Iran are likely to come to an agreement with each other and some non-OPEC producers about curbing crude oil supply. The outcome of these meetings could have significant consequences for oil prices, which in turn should have strong influence on the direction of energy stocks. Meanwhile the first live TV debate between Hillary Clinton and Donald Trump is tonight and this may well have consequences on the markets should one or the other candidate manage to cause a swing in the polls.

Meanwhile on a micro level, concerns about the health of Deutsche Bank continues to haunt investors. Shares in Germany’s largest lender have now touched their lowest in 24 years after another 6 per cent drop on Monday. This has triggered a sell-off in financial stocks across Europe today. The latest sell-off in DB has been attributed in the media to a report that Germany’s Chancellor Angela Merkel has ruled out providing any state aid for the bank. The lender has had a terrible year amid concerns about its profitability due to the impact of negative interest rates in the Eurozone and after a series of major regulatory fines.

It remains to be seen however whether the above events will translate into a full-blown sell-off in the markets this week. After last week’s rebound and with US equity indices hovering near record high levels, I wouldn’t be surprised if the weakness proves to be a temporary one. Indeed, the S&P 500 was testing a key support level at 2150 at the time of this writing. After holding its own above the significant support area of 2120-2135 over the past couple of weeks, the path of least resistance remains to the upside despite today’s selling pressure. As before, our technical bias would only turn bearish upon a potential breakdown of the bullish trend line, which comes in somewhere below 2120. Some of the key levels to watch are shown on the chart, below. 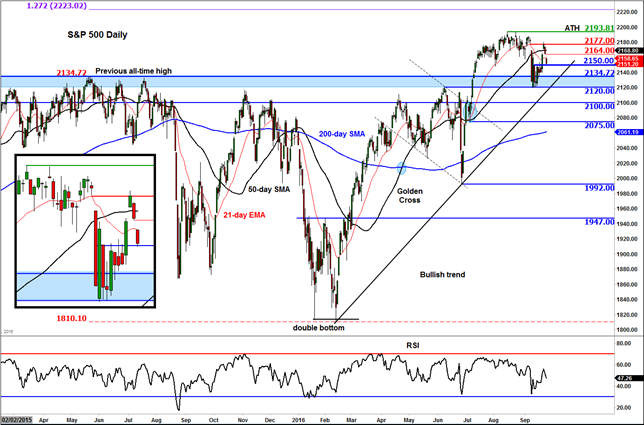