After Monday’s price action, you'd be excused to think that today would have been a “risk-on” day. After all, the major stock averages ended Monday with relatively large green candles and there was some bullish follow-through at the European open.

After Monday’s price action, you'd be excused to think that today would have been a “risk-on” day. After all, the major stock averages ended Monday with relatively large green candles and there was some bullish follow-through at the European open. That’s why we thought gold’s earlier rally looked suspicious and that the metal could weaken again. However, it looks like we got that one wrong. Gold has continued to push higher and stocks have been unable to build on to their earlier gains. The markets feel bearish and with WTI crude oil’s sudden drop after momentarily rising above $75, there could be some turbulence for stocks in the days to come. But the July 4 holidays in the US means Wall Street will be shut for trading tomorrow and the US session will end earlier than usual ahead of it today. This may actually be why Wall Street was struggling as investors probably didn’t want to be exposed to any sharp moves while the markets are closed in the US. But generally speaking, it is becoming increasingly difficult to remain optimistic on overvalued stocks with diminishing central bank support. After all, it was the era of extremely low interest rates and huge QE programmes that led to the stock market rally in the first place, throughout all those years since 2009. With monetary conditions tightening now, yield-seeking investors may start to think that actually there’s not much value left in stocks at these elevated levels. Thus, we could see some distribution and a market correction soon.

Technically, the Dow looks weak after creating a couple of fake-out patterns (see chart) which eventually led to the breakdown of key supports. More recently, it broke below the 200-day average and has held below it for several days. It had another attempt to climb back above the 200-day average but it was struggle to do so at the time of writing. Thus if we see a clear breakdown here then this could lead to further follow-up technical selling as the longs who attempted to buy the dip are forced to liquidate their positions. Specifically, a break below support at 24080 could potentially pave the way for a subsequent drop below the 23350 area, where the next pool of liquidity will undoubtedly be resting, for the index had formerly found strong support there. However, if the Dow manages to cling onto the 200-day average support and subsequently climbs back above the 24360-24570 resistance area then this would be a bullish outcome. 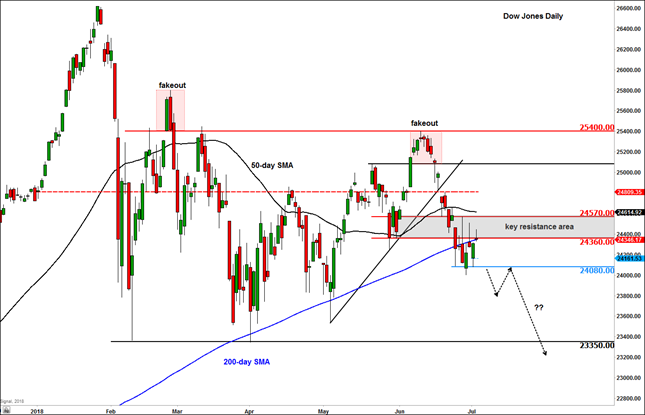