Streaming Wars: Will Disney+ Dethrone the Dominance of Netflix?

With NFLX trading at an astronomical valuation, the rise of Disney+ could set up a pairs trade opportunity...

As a kid who grew up on a steady diet of Disney movies and the father of a young daughter, there was never a “decision” about whether my household would subscribe to Disney’s (DIS) new streaming service, Disney+.

For investors though, the real question was whether “The Mouse” could expand beyond its direct target market and convince more fringe households to shell out another monthly fee in the ongoing “streaming wars.” Based on the early results, it looks like Disney’s entry into the streaming business has been an absolute blockbuster.

Disney’s history with video streaming is rather fraught: after panning the streaming business for years, and making costly investments into its legacy TV business, Disney belatedly acquired a controlling stake in BAMTech, a streaming technology firm, for $2.6B in August 2017. In addition to using the technology for the ESPN+ sports streaming service, Disney formally announced its intention to launch a general entertainment streaming service last November.

Bolstered by the acquisition of key assets from 21st Century Fox earlier this year, Disney+ launched in the US and Canada last week with an impressive catalog of past movies and TV shows from Disney studios, Marvel, Pixar, National Geographic, and of course, Star Wars. The service intends to launch across Western Europe in March of 2020, with Eastern Europe, Latin America, and the Asia Pacific region set to roll out later in 2020 or early 2021.

At a price of approximately $7/month, with discounts for “bundling” with other streaming services and a year of free access through certain phone plans, Disney announced that it surpassed 10 million subscribers on its very first day. To put it bluntly, these figures were well above expectations: analysts had projected the service would secure 10-18 million subscribers in its entire first year, the app’s servers experienced intermittent outages as a result of the huge demand, and Disney’s stock surged 7% on the day.

Looking out a bit further, Disney forecasts that it will have 60-90 million subscribers globally by 2024, a goal that looks achievable given the service’s strong start. For reference, Disney’s Hulu service has 28 million subscribers, while Netflix sports over 150 million global subscribers.

From a business perspective, streaming has high “operating leverage,” meaning that there are extensive fixed costs (building out the user interface, acquiring/producing quality content, etc) and minimal variable costs. Much like an airline or a movie theatre, the incremental cost of adding an additional user is almost pure profit, meaning that high operating leverage businesses must onboard customers as quickly as possible to offset their large fixed costs and achieve profitability.

While streaming services can offer a compelling value relative to traditional television bundles, consumers’ pocketbooks do have a limit. A recent survey from the Wall Street Journal shows that the average American is willing to shell out about $44/month for 3.6 streaming services: 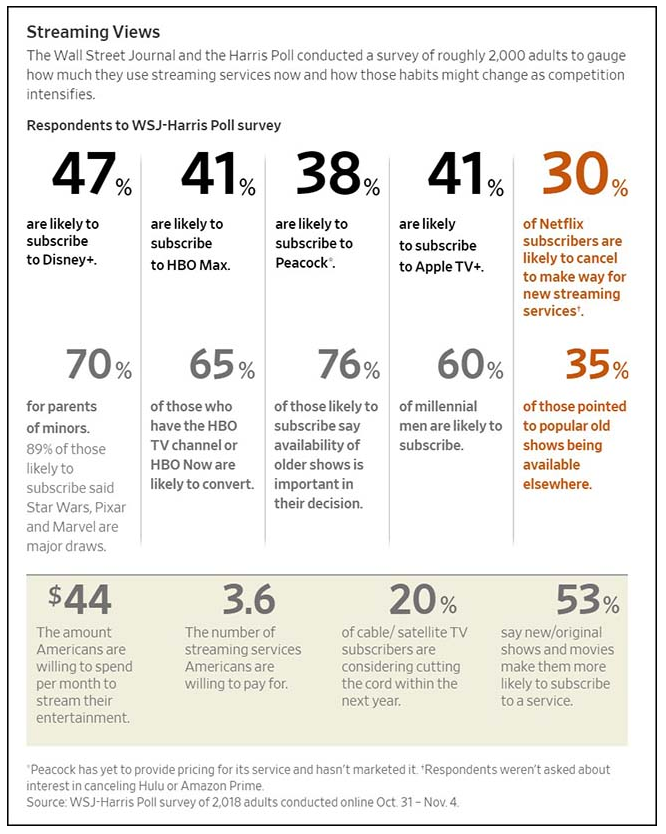 As the number of high-quality streaming services rise, consumers will increasingly be forced into tough decisions about which services provide the best value. At the end of the day, unique content is the primary factor that drives streaming subscription decisions, and this dynamic has led to a textbook “arms race” in the battle for compelling content.

According to the Financial Times, “there were 496 scripted TV shows created in the US last year, more than double the 216 series released in 2010,” less than a decade ago. At market leader Netflix alone, content spending rose to over $12B in 2018, nearly double the amount spent just two years prior. Analysts anticipate that figure to grow to a staggering $15B in 2019! 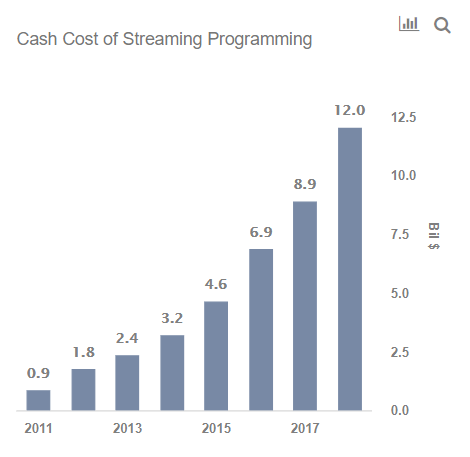 As the arms race has heated up, Netflix’s content spending has risen from just 27% of revenue in 2011 to 75% in 2019, a concern that could be exacerbated as the last of Disney’s content rolls off contract at the end of the year. For Netflix, the obvious solution is to rise subscription prices, but as last month’s lackluster subscriber growth figures demonstrated, the company may be reaching an inflection point beyond which it can’t raise prices without losing subscribers.

Of course, Disney+ will ultimately face a similar dilemma (the service’s standout new show, The Mandalorian, reportedly has a $10M budget per episode for example), but the content Catch-22 is less acute for The Mouse, which can draw on a century of movies and TV shows to pull in new subscribers, in addition to more recent popular content from Star Wars, Pixar, Marvel, and National Geographic.

So What’s the Trade?

The above analysis creates a compelling standalone bullish thesis for Disney, but readers could also consider a long Disney, short Netflix “pairs trade.” By offsetting a long Disney position with an equivalent short in Netflix, traders could reduce the impact of fluctuations in the broader market and key in on the specific thesis that Disney+ will continue to take market share from Netflix (it’s worth noting that readers with the alternative view could consider the opposite pairs trade: long Netflix, short Disney).

As the chart below shows, Disney has already risen roughly 70% relative to Netflix in the past eight months. While the relative outperformance is impressive, Netflix still sports a P/E ratio of nearly 100, a price that implies it will become the undisputed dominant streaming service. If Disney, with a P/E ratio of just 21, can (even partially) dethrone Netflix, such a pairs trade could be successful, regardless of what the broader market does: 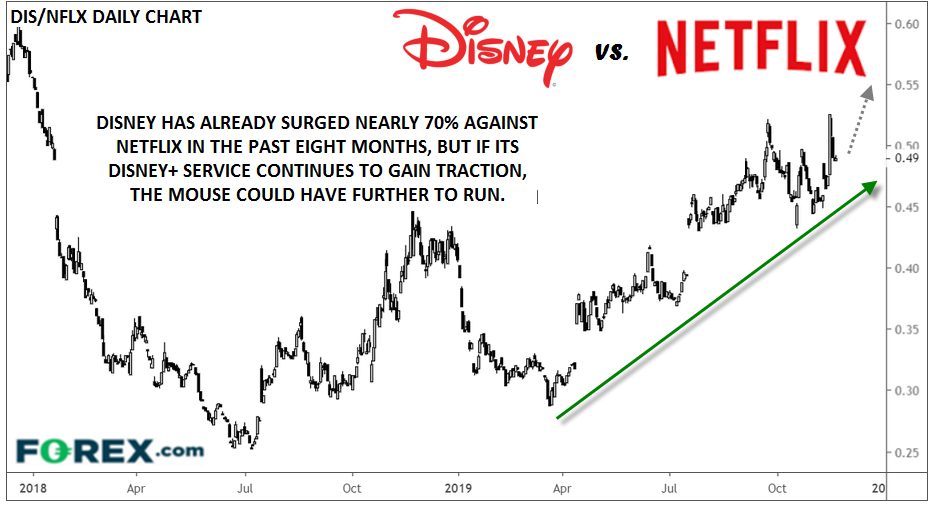 Source: TradingView, FOREX.com. Please note that this chart assumes the pairs trade is constantly rebalanced to reflect equivalent holdings in each stock.

It doesn’t quite have the same ring to it, but perhaps in a couple years “Disney+ and chill” could be the ideal date night!