The pound continues to recover nicely after being dumped post the Brexit vote. It has been lent support mainly by the Bank of England turning less dovish, as the weakness of the currency has been causing import prices and thus inflation to rise. However input costs for manufacturers actually fell in November and by a good 1.1% month-over-month, which was much larger than expected. What’s more, factory gate prices were flat month-over-month. The monthly figures can be volatile, but this is good news for those worried that producers will pass on the rising costs to the consumers. But the headline CPI measure of inflation rose to 1.2% year-over-year in November, which was the highest it has been since October 2014, when the rate was at 1.3%. Also topping expectations were both the core CPI and RPI measures of inflation.

So it remains to be seen how far the GBP/USD can go higher with the dollar generally rising amid a hawkish Fed. In the UK meanwhile uncertainty remains over how and when the Brexit process will start. But I do think that the worst of the selling is over for the pound as the Bank of England is no longer looking to cut interest rates again. It nevertheless remains vulnerable to sharp falls here and there. However against weaker currencies like the Japanese yen or euro it may be able to perform much better than against the dollar.

From a technical point of view, the GBP/USD continues to reside inside its rising channel, thus the trend is still technically bullish despite last week’s wobble. Last week, the Cable turned lower off of 1.2770 level which means that the long-term resistance in the 1.2800/75 range was left untested. Because of the downward move, there may be lots of buy stops stacking above 1.2770 now. The cluster of buy stops there may act like a magnate to first pull price towards it and then fuel a potentially rally into that 1.2800/75 area, before price turns lower.

Why am I keep on banging on about 1.2880/75 range? Well this area was the last support prior to the breakdown that eventually led to the flash crash. Once support, now it could turn into resistance. In addition, the top of this range is where the 61.8% Fibonacci level comes into play.

Now price may never get to the 1.2880/75 area but it is nevertheless where we will be anticipating the cable to turn lower from, perhaps immediately after the FOMC statement on Wednesday. However if price starts to move below short-term supports such as 1.2695 and 1.2660 then we may see a drop towards the more stronger support levels at 1.2620, 1.2580 or even 1.2525 first. Ultimately, the short-term trend remains bullish until and unless price breaks below the support trend of the bullish channel. Generally speaking, I think the cable will remain range-bound between 1.25-1.30 as we approach year-end. 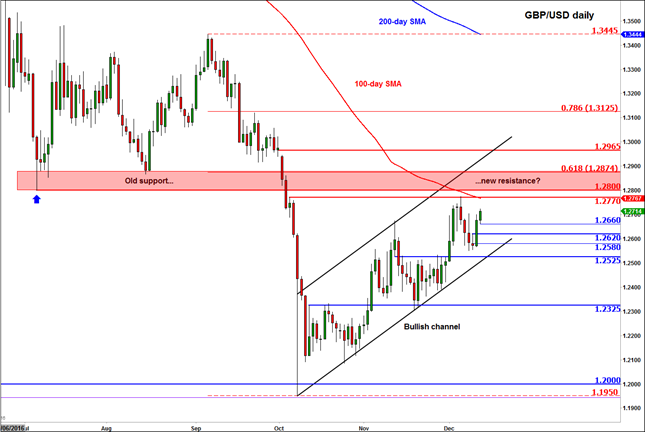