Yesterday,  US President Trump decided enough is enough already.  First, he restored tariffs on Argentina and Brazil for aluminum and steel imports to the United States. He cited a “massive devaluation of their currencies”, which in turn hurts American farmers.  Later in the day, it was determined after a five-month investigation that a French digital tax discriminated against American Internet companies.  As a result,  tariffs of up to $2.4 billion on French consumer imports to the United States was proposed.  In addition,  ISM Manufacturing Data was worse than expected in the United States.  Combine these factors together, and most major stock indices were down near 1% yesterday.  In addition, the US Dollar Index was also down 0.5%.

Today, President Trump said, “I have no deadline on China deal and it might be better to wait until after November 2020 election”.  And later, Commerce Secretary Wilbur Ross said, “December 15th tariffs on Chinese imports will be applied unless there is some real reason to postpone them, such as substantive progress in talks”.  Stocks continued to sell off today, with major indices currently down nearly another 1%. 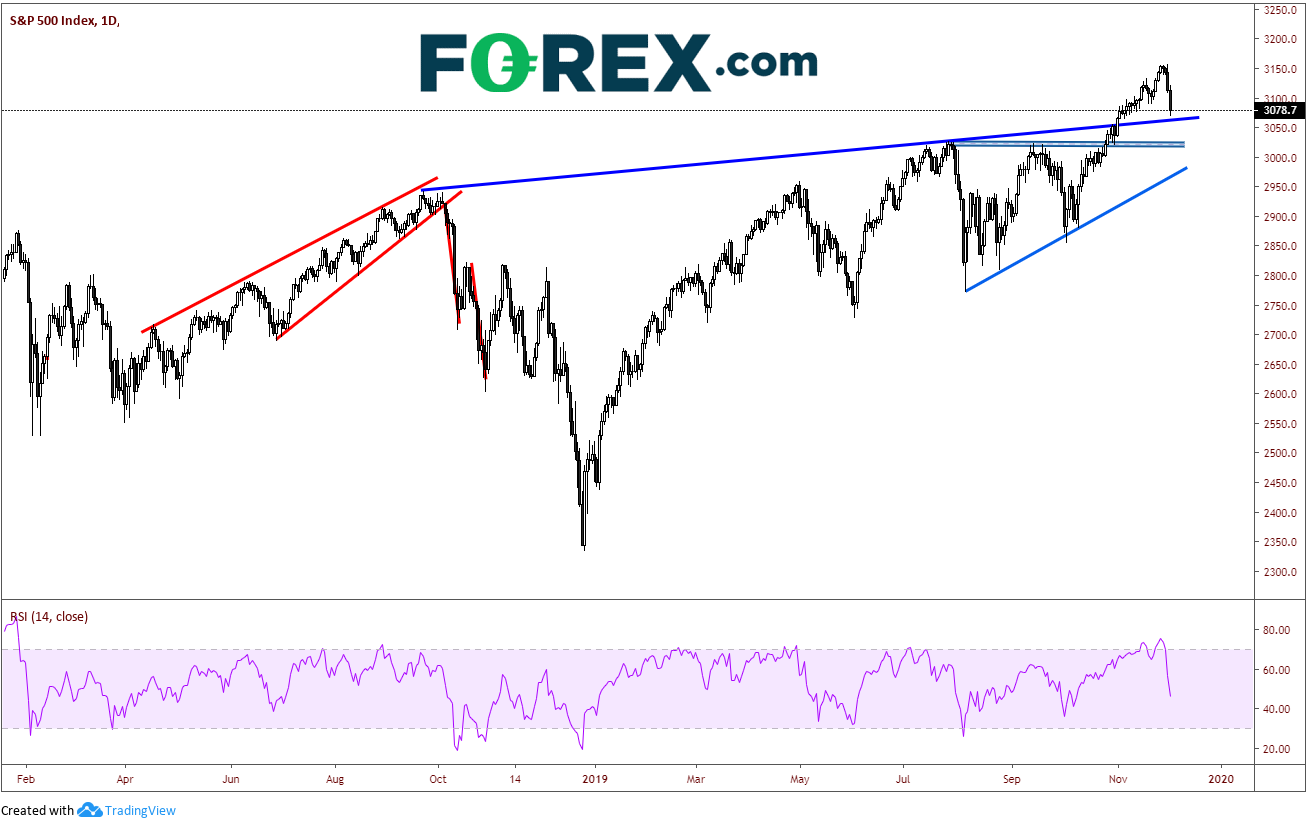 Although the S&P 500 is down nearly 80 handles in two days, price still has room to run down towards 3065, which is the upward sloping trendline dating back to September 2018.    There is also horizontal support just below that level near 3060.    Psychological resistance now comes across back at 3100, and then horizontal and trendline resistance on the 240-minute timeframe near 3113. 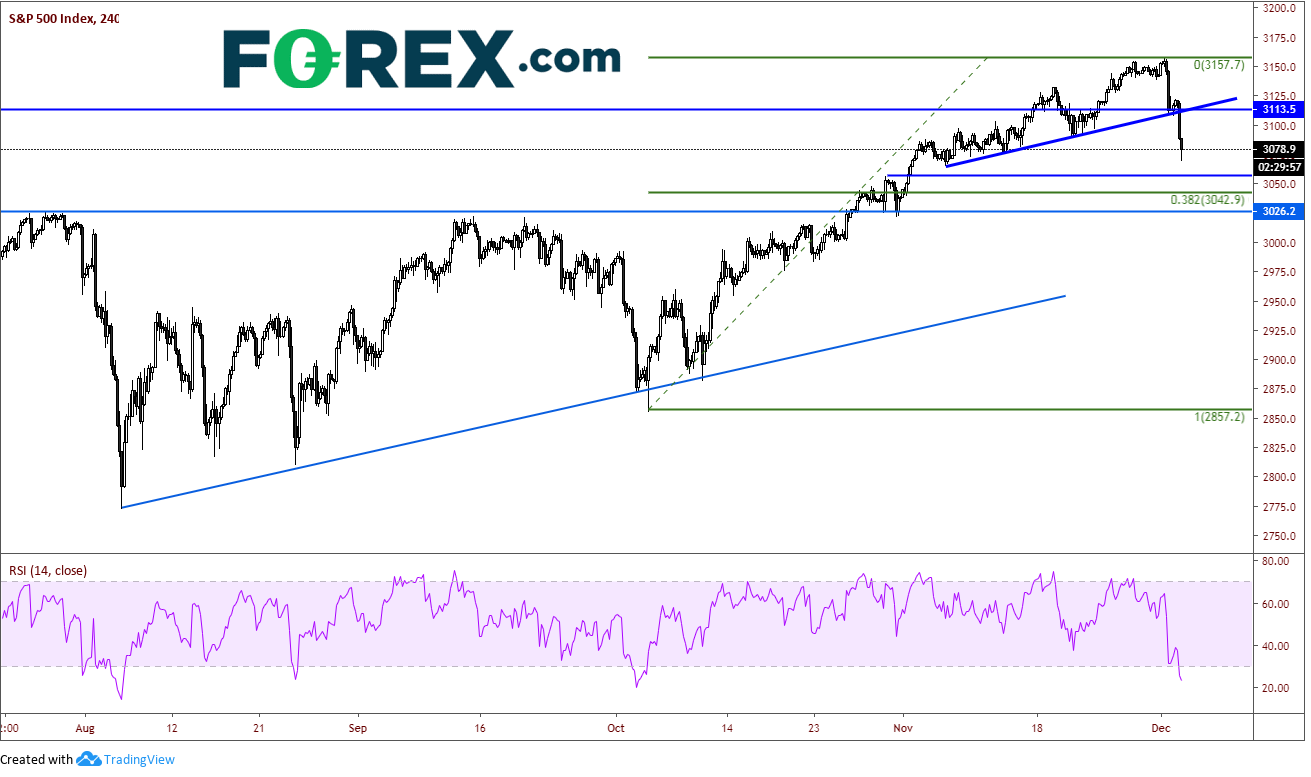 However, there is one big difference between yesterday and today in terms of market action.  Yesterday the DXY participated and sold off.  The bond market was relatively muted.  Today, the bond market is rallying and the DXY is close to unchanged.  Bond prices and yields are inversely related, so as bond prices go bid, yields move lower.  US 10 Year Yields are down nearly -5.7% at 1.72.   This is the third time yields have tested this level, as it is the 50% retracement level from the lows on October 8th to the highs on November 7th.  If bonds continue to rally, yields will continue to fall.  The next level of support for yields is the 61.8% Fibonacci retracement level of the previously mentioned timeframe at 1.684. 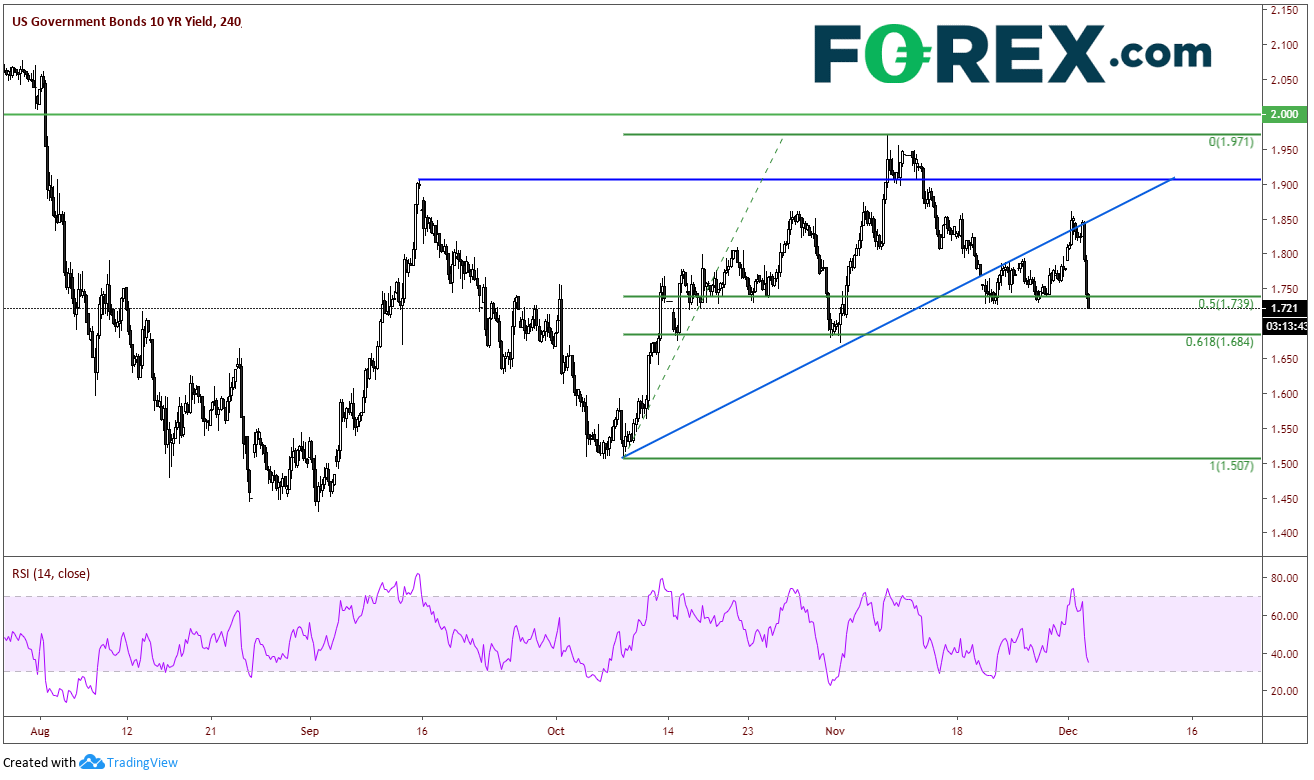 As the markets are currently in risk off mode, watch for comments and headlines to try and soften the blow of the tariffs and the possible US-China trade deal delay.  With the markets down about 2% in two days, support levels may hold as the market takes a breather ahead of ADP payrolls tomorrow and NFP on Friday.