Technical View: GBP/USD’s Chart May Be Uglier Than Brexit Infighting

As my colleague Fawad Razaqzada noted yesterday, “Mrs May’s decision was not surprising at all; it just means more delays and more frustration for everyone involved. The markets don’t typically respond well to uncertainty…” Looking at the daily chart of GBP/USD, yesterday’s drama led to a major breakdown below support that could weigh on cable through the end of the year and beyond.

Following a four-month stabilization above the 1.2700 handle, GBP/USD is once again solidly under the control of the bears. Over that period, rates formed a version of an inverted “cup-and-handle” pattern. This formation shows growing selling pressure and, once confirmed by a break below the “rim” of the candle, signals a likely continuation to the downside. 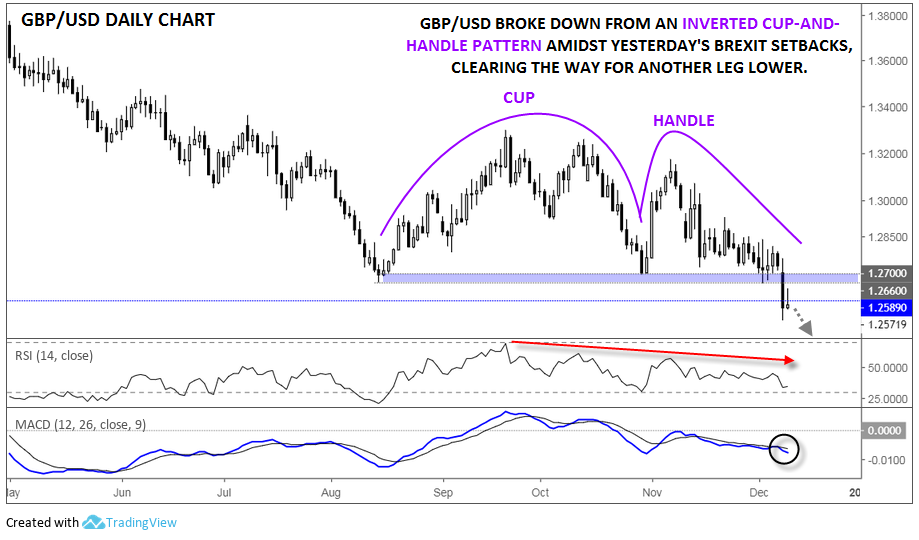 Turning our attention to the secondary indicators, the RSI is in a downtrend of its own since peaking at 69 back in September. Though it was close, the failure to reach “overbought” conditions (>70) keeps this indicator in a bearish configuration. For its part, the MACD indicator is trending lower below both its signal line and the “0” level, showing an accelerating bearish trend.

From a support perspective, GBP/USD appears to be pausing at the June 2017 low near 1.2590, but given the strength of the breakdown (and the lingering fundamental uncertainty), we don’t expect that this support level will hold for long. Below that area, there’s only a minor low around 1.2370 before the October 2016 “flash crash” lows in the 1.2000-1.2100 zone.

At this point, bulls would need to see a confirmed recovery back above the 1.2700 handle to gain any semblance of confidence, ideally accompanied a Brexit breakthrough. Unless/until we see that, the path of least resistance for GBP/USD remains to the downside.