Mining and technology shares in focus whilst China-linked rallies continue

Share:
Mining and technology shares in focus whilst China-linked rallies continue
The latest surge by Shanghai and Shenzhen indices comes just a day after trade data showed imports fell 8.5% on the year in April, reversing a modest rise in the month before. The bullish mood is also at odds with Beijing’s increasingly entrenched and multi-faceted trade dispute with Washington. Late on Monday the U.S. President Donald Trump kept the temperature elevated by threatening to punish China with further tariff hikes, if President Xi Jinping is a no-show at the G-20’s upcoming leadership summit.
Even if the two do have a sit-down discussion, the best outcome that can be hoped for is the resumption of a previous ceasefire. This would simply return the state of play to where it was before developing consensus collapsed in May.
So on the surface China’s stock investors appear to be glossing over some heavyweight challenges, albeit with circumstantial triggers:
• PBOC’s stronger than expected fixing of the band over which it permits the yuan to trade onshore and offshore. This doesn’t assuage recent worries of tacit depreciation much
• Another hint from Trump in as many weeks that Washington could “do something with respect to Huawei as part of our trade negotiation with China”
• Those words buoyed Philadelphia’s SOX semiconductor index by 3.7%, sending a charge through China’s techs
• A change in rules on bond issuance for infrastructure projects lit a torch for industrial and materials producers, particularly miners
Diversified miners are consequently out in front in Europe, sending STOXX’s Materials sub-index up 2%, earlier. Europe’s hardware focused technology market is predictably lifted too.
Investors are also weighing a complete lack of tightening priced into Fed, ECB, BOJ and RBA policy expectations into year end. This is setting the scene for policy to ease or loosen even further elsewhere as well. At a minimum though, reinstated monetary assurance was building well before trade tensions boiled over again. Yet MSCI’s World Index fell about 44% between early May and early this month. China’s CSI300 dropped 50% from April highs before last week’s bounce. In other words, central bank policy assistance can be overestimated.
In the meantime, the contours of global markets’ near-term direction are still likely to track China’s. Note that even after retreating through much of April and all of May, the Shanghai Shenzhen 300 index is still up by almost a quarter on the year. There’s no way of knowing how well this prices risks of more punitive taxes on Chinese imports to the U.S. But we can be more certain that investors will again look to cash out in a hurry when those risks return to the fore.
Till then, the broadly technological flavour of this rebound will keep Nasdaq markets among the most obvious low-hanging fruit. The cash Nasdaq 100 slightly lags the revival of SOX since the end of May, for one thing. As we re-enter the twilight zone of incongruous rallies, buyers will seek to close that gap.
It’s worth noting that at 7575 a little earlier, the front-month E-Mini Nasdaq contract was less than 4% from the series record top on 25th April. (Please note this product may not be available to trade in all regions.)
• Supports: 61.8% of the 25th April-3rd June correction is just below at 7519. Friday’s swing off 7287 almost exactly echoes another one at 7287 on 13th May
• Resistance: traders will first focus on 7637/41 tops that capped rallies on 10th and 16th of last month. Any rally should get bonus points for sustainably breaking above
Nasdaq 100 E-Mini Futures (continuous chart) – two-hourly 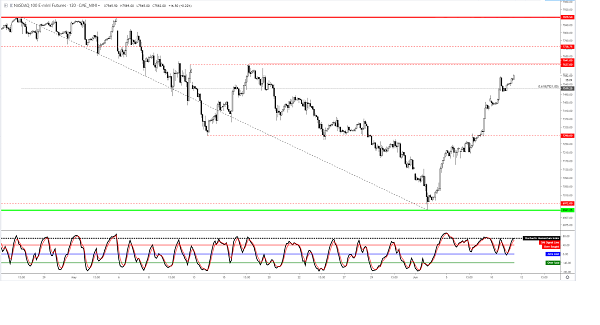