It took just near a month for Chinese tech giant Tencent (700.HK) to recoup the losses seen during the global health crisis...

With emerging signs of passing the coronavirus peak, major governments around the world are planning to reopen their economies in phase. Equity market sentiment continues to improve, and it took just near a month for Chinese tech giant Tencent (700.HK) to recoup the losses seen during the global health crisis. According to market intelligence Sensor Tower, Tencent's PlayerUnknown's Battlegrounds was the world's highest grossing mobile game in March. Both Bank of America Merrill Lynch and Jefferies expect strong 1Q mobile game revenue from the company, with growth forecast of 49% - 50%. Tencent will report its 1Q results on May 15.
From a technical point of view, Tencent is maintaining its bullish run as shown on the daily chart. It has formed a one-day reversal candlestick on April 22, after making a breakaway gap on April 14. Bullish investors may consider $391.0 as the nearest support, with a potential move to break above the nearest resistance at $419.0 and test the next resistance at $445.0. In an alternative scenario, a break below $391.0 would suggest a deeper price correction is due and open a path to the next support at $369.0. 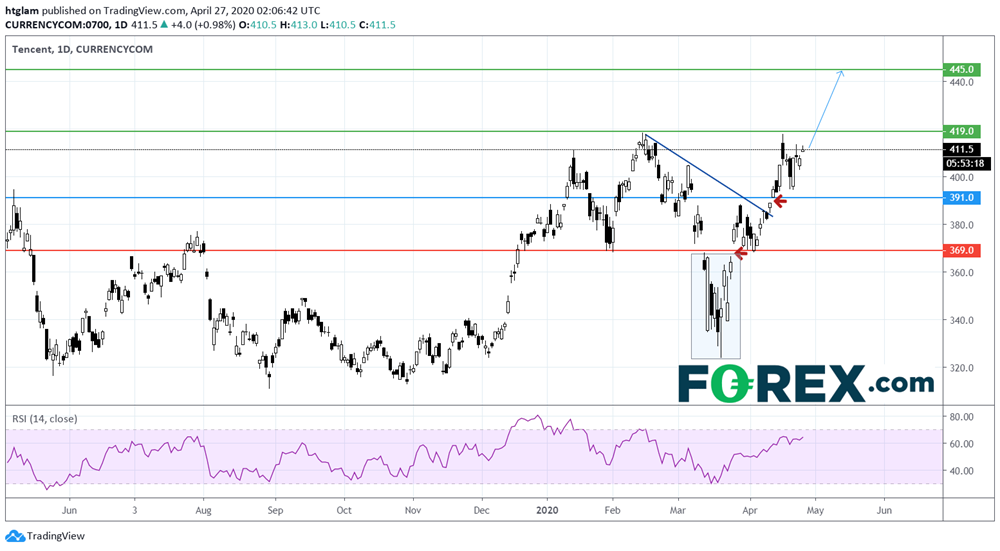