Terrors In Tandem: Bitcoin And CNH Pause For Breath At Their Technical Junctures

We’ve continued to keep an eye on USD/CNH as it’s an excellent macro barometer of risk. If the Yuan continues to weaken, it could have huge ramifications for global markets. Key trade partners with China are going to want to see their currencies lower (think AUD, SGD and emerging FX etc) and it would only escalate tensions with the US and, therefore global growth.

Indeed, the Yuan was weakening ahead of trade talks last Wednesday after USD/CNH broke out of a bullish flag, before coiling beneath the 200-day eMA. Since the original breakout, the pair has ascended a further 2.35% whilst high stakes talks commenced, whilst from the outside appearing that Beijing were letting their currency weaken as some sort of bargaining chip. 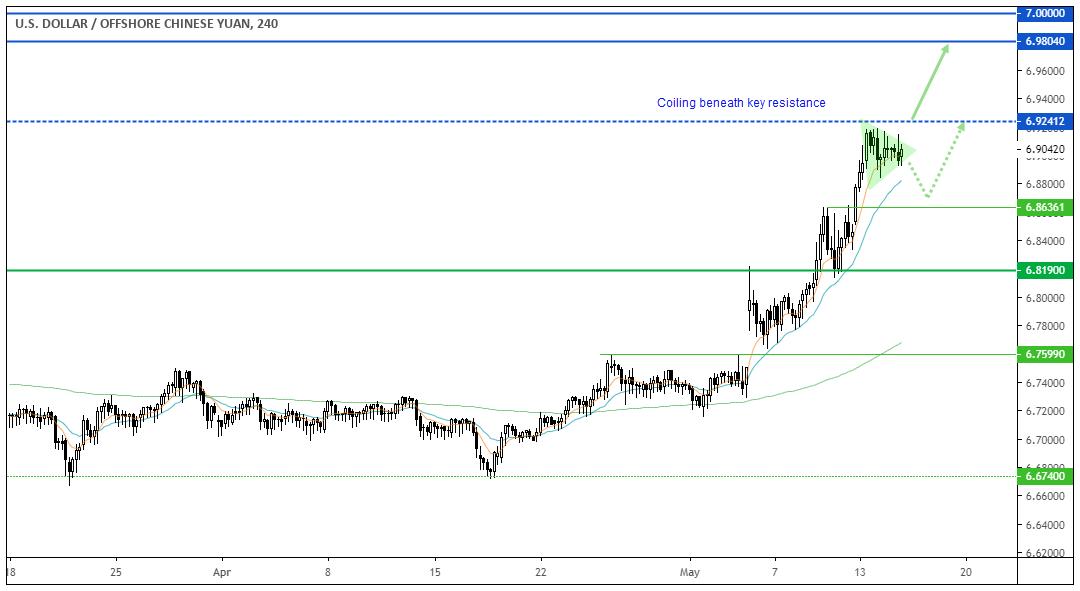 Currently prices are coiling beneath our 6.92 target as bulls transfix on the 6.98 high and, in absence of a trade deal arriving, momentum favours an eventual break higher. If this were another market and driven purely by fundamentals, we’d argue it was technically over-extended on the daily chart. Yet if history is to be our guide, it can continue stubbornly in one direction if Beijing allow. For now, we’ll see if it can retrace from key resistance and build a base above 6.86 or coil a little more, before breaking above 6.92 for a run to 6.98. 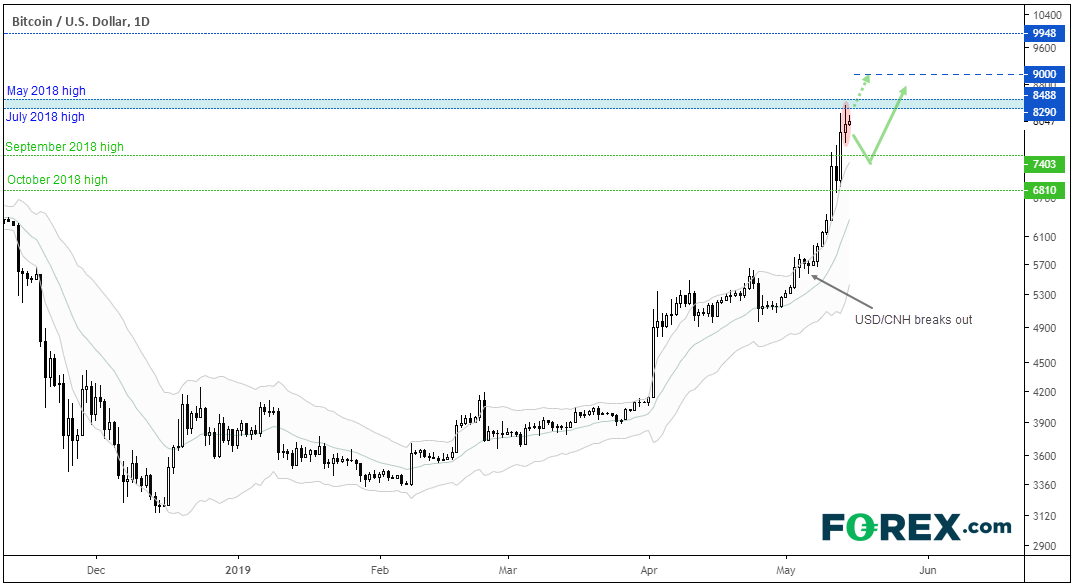 However, it’s interesting to note that USD/CNH’s breakout has been closely tracked by Bitcoin’s melt up and how Bitcoin was gaining traction in the weeks leading up to USD/CNH’s breakout. We have seen previously that a weaker Yuan can create a ‘flight to safety’ to Bitcoin (ironically one of the most volatile assets out there) and if there is an expectation of a weaker Yuan, it can create a feedback loop between the two market. Of course, if Yuan weakens too much then capital controls could scupper the rally on both. But, for now, they’re moving in tandem and treading water beneath key resistance levels.

Bitcoin appears over-extended at the highs and has printed a bearish hammer beneath key resistance to show a hesitancy to break higher. We’d prefer to see a pullback towards 7400 before considering long but, in the case of both BTC and CNH, these markets tend not to look back when they break. Therefor, a break above 8,500 assumes trend continuation.