Even despite this morning’s drop, the stock is still trading more than 50% higher over the last six weeks alone...

There’s never a dull moment when it comes to trading the world’s newest trillion-dollar company…even when the market’s closed!

Over the weekend, Tesla Motors (TSLA) CEO Elon Musk posted a twitter poll asking his followers to weigh in on whether he should sell 10% of his shares in the company, an amount equivalent to over $20B dollars. While its impossible to speculate on the mercurial CEO’s motives, he has indicated that he’ll abide by the results of his poll, which has now closed with about 58% of the more than 3.5M votes (!) in favor of the sale:

Much is made lately of unrealized gains being a means of tax avoidance, so I propose selling 10% of my Tesla stock.

Do you support this?

Not surprisingly, news that the EV company’s CEO and biggest cheerleader will be selling more than 2% of TSLA’s total float has some momentum traders bailing out of the stock, with shares trading down by nearly -5% as we go to press.

For more context on the news and today’s move in TSLA shares, see this morning’s articles from my colleagues Josh Warner and Fiona Cincotta!

Euphoria over the shares has reached a fever pitch in recent weeks, leaving the stock vulnerable to a quick reversal if the momentum falters. That said, bears who believe that the stock is overvalued should remember the infamous words of John Maynard Keynes: “The market can remain irrational longer than you can remain solvent.” Countless short sellers have been absolutely wrecked by betting against Tesla over the last half decade, and there’s no reason it can’t continue to rise from here in the short term.

Even despite this morning’s drop, the stock is still trading more than 50% higher over the last six weeks alone, and given the stock’s resilience to negative news in the past (remember Musk’s “Tesla stock price is too high imo” tweet last year?), it seems unlikely that Elon selling a small minority of his shares will be enough to entirely derail TSLA’s staggering rally by itself.

Any time a trading instrument is in the midst of a parabolic move, risk management is critical. In the case of TSLA, bullish traders could use a short-term moving average, like the 8-day EMA, as a possible stop loss area. If the stock breaks and closes below that price, it could signal that a deeper pullback is in play. Likewise, rather than blindly shorting at these stratospheric levels, TSLA bears could wait for a breakdown below the 8-day EMA (or, more conservatively, a bearish crossover of the 8-day EMA back below the 21-day EMA) to consider short entries with a tight stop loss. 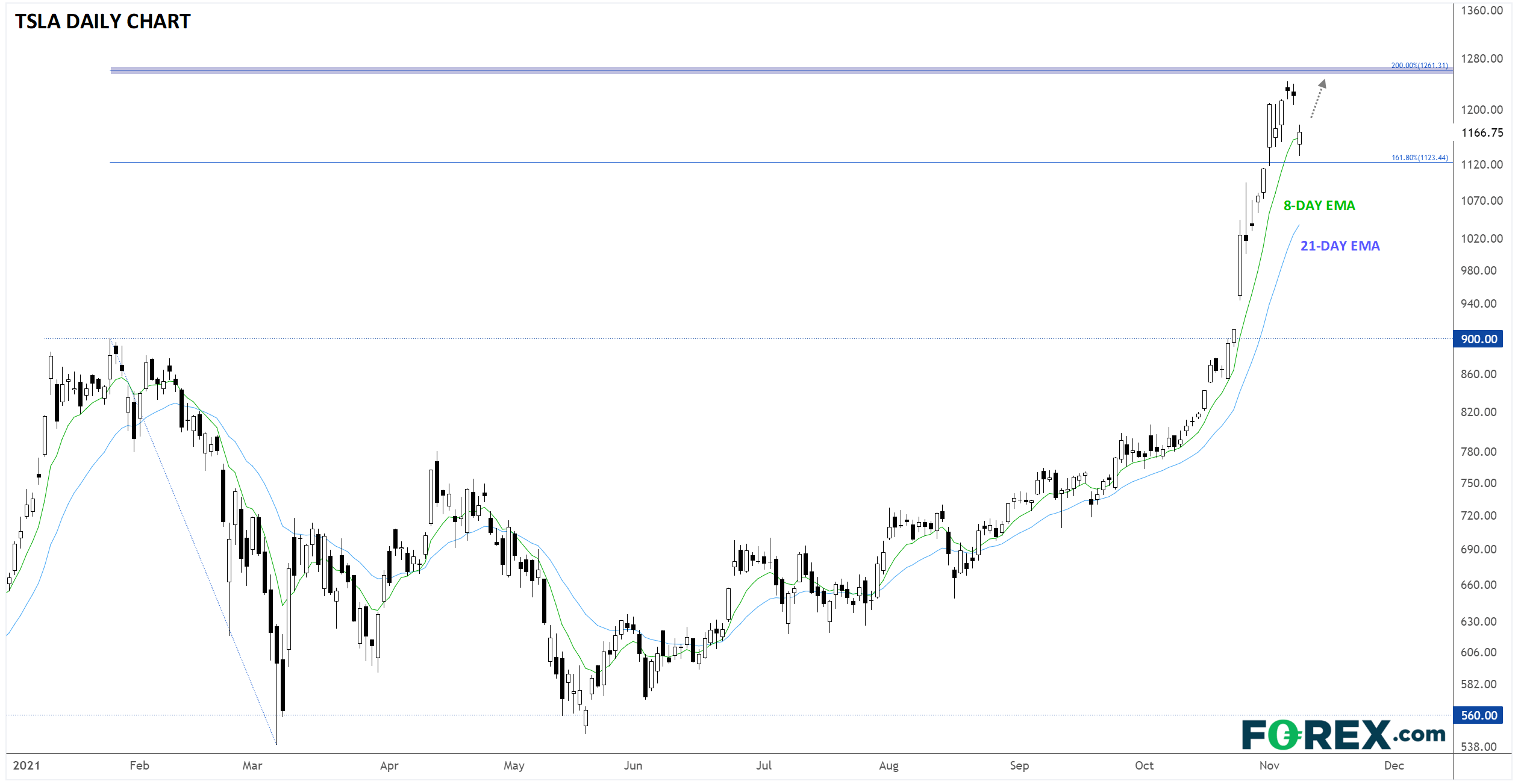