BP said it has achieved its goal of reducing debt earlier than planned after delivering a better-than-expected performance and disposing of several projects, paving the way for it to return cash to shareholders this year.

BP had set itself a goal to reduce its net debt pile to $35 billion sometime in late 2021 or early 2022. However, the oil giant has now hit its target earlier than planned.

‘We are pleased to announce that we now expect to have reached our $35 billion net debt target during the first quarter 2021. This is a result of earlier than anticipated delivery of disposal proceeds combined with very strong business performance during the first quarter. We look forward to updating the market at our first quarter results, including further information on share buybacks,’ said chief executive Bernard Looney.

This is an important milestone for shareholders as chief executive Bernard Looney said last year, when BP had to slash its dividend as it suffered during the pandemic, that buybacks would only return once the net debt target had been met. They will also be more important in terms of returns after Looney scrapped BP’s progressive dividend policy to divert more cash for investment into greener energy as the company transitions away from oil.

The company said it intends to return ‘at least’ 60% of surplus cashflow to shareholders through buybacks now that net debt is at a desired range, with more information to be released on April 27.

BP booked $4.7 billion in disposal proceeds during the first three months of the year. This included the $2.4 billion sale of its 20% stake in Oman’s Block 21, $1 billion in final proceeds from the sale of its petrochemicals business to INEOS, $700 million from selling its 49% stake in refined products and crude logistic services in the US, and $400 million from selling its holding in data specialist Palantir.

This means it is already close to achieving its goal to sell $4 billion to $6 billion worth of assets this year, with BP stating it expected to hit the upper end of that range on Tuesday. The company is hoping to make $25 billion worth of disposal proceeds between the second half of 2020 and 2025.

BP share price trades above its ascending trendline dating back to early November.

After hitting an 8 month high in early March of 327, the price slipped lower finding support at the confluence of the 50 sma and the ascending trendline. The price has been range bound between 290 and 300 since March 23 and the RSI also shows a neutral bias.

The price has jumped higher on the open but it could be prudent for buyers to await a move beyond resistance at 300p in order to take on the 20 sma at 307p. A close above this level could see the buyers look to take on the recent high 327p.

Meanwhile sellers might look for a move below support again at 290p the 50 sma and trend line before targeting 265p the low February 15 and 250p low February 5. 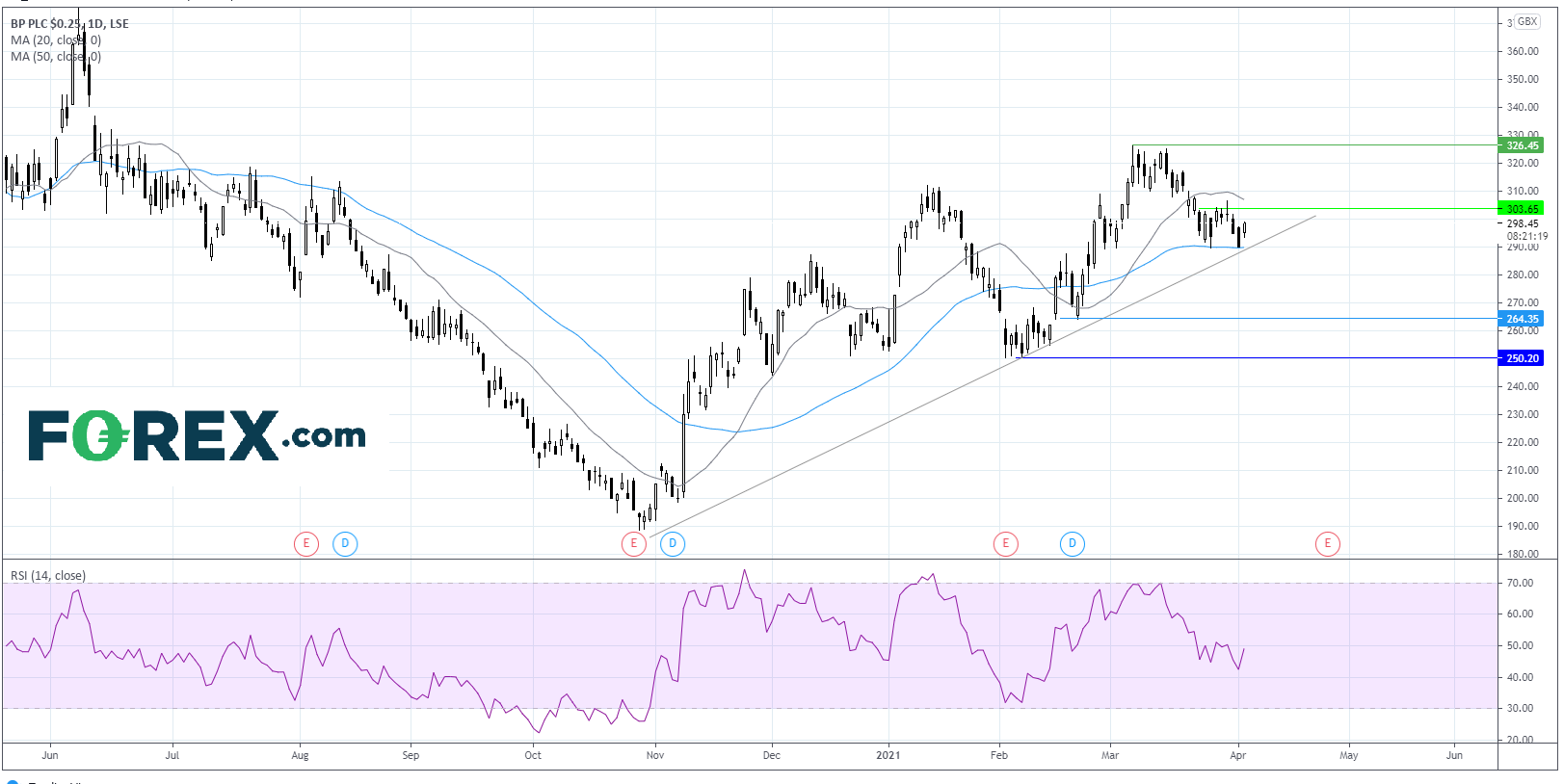 Homeserve will deliver adjusted profit slightly ahead of expectations when it releases its annual results.

The company, which runs platforms that help with home repairs and improvements such as Checkatrade, said it will deliver an adjusted pretax profit of £191 million over the year to the end of March 2021. That is up from £181 million in the last financial year and marginally better than the £190.2 million expected by analysts.

Homeserve delivered organic customer growth of 7% in North America during the year and now has 4.7 million customers compared to only 4.4 million the year before. It reported lower customer numbers in the UK of 1.6 million compared to 1.8 million, but said the amount of income generated per customer had risen. Its membership model continues to ‘prove resilient’ in all territories with an overall retention rate edging up to 83% from 82%.

Homeserve said it ended the financial year with net debt of £530 million, equal to about 1.8x earnings before interest, tax, depreciation and amortisation.

Preliminary results will be released on May 18.

Oxford Biomedica has expanded its relationship with Boehringer Ingelheim by signing a new three-year development and supply agreement that will see the London-listed firm manufacture and provide various types of viral vectors to the German company.

The agreement allows Oxford Biomedica to produce batches for Boehringer that will help it develop viral vectors, which are used to deliver genetic material into cells of a living organism. Boehringer is a sizeable biopharmaceutical firm specialising in areas like respiratory diseases and virology, and is pursuing several potential products to help with the coronavirus pandemic.

Tullow Oil has started a new programme of drilling on its main producing fields in Ghana as it starts work on a 10-year plan that aims to tap the value left in its huge resource base in the country.

The company unveiled plans to start a multi-well drill campaign on its Jubilee and TEN fields in Ghana, which are responsible for the majority of its production, last November as part of a wider long-term plan launched by chief executive Rahul Dhir after he took over at the helm last year.

Tullow has now started drilling the first well on the Jubilee field and expects to drill three more before the end of 2021, by which it will have drilled two production wells and one water injector on Jubilee and a gas injector well on TEN.

‘The Ghana portfolio has a large resource base with extensive infrastructure already in place. Through a rigorous focus on costs and capital discipline, Tullow believes that these assets have the potential to generate material cash flow over the next decade and deliver significant value for Ghana and investors,’ said Tullow.

Last year, Tullow said it had extracted just 400 million barrels from 2.9 billion barrels of oil in place at its Ghanaian operations, representing just 14% of the total.

Tullow’s plan is to ramp-up output in Ghana while lowering costs to ensure it can produce a higher margin. This will allow it to improve cashflow to fund its development, service debt and deliver returns for shareholders, which will also be boosted by asset sales following its decision to offload projects in Uganda last year.

Ryanair and Wizz Air continue to suffer during pandemic

Ryanair said it carried just 500,000 passengers in March, down 91% from the 5.5 million people it carried the year before. The airline said it operated just 5% of its normal March schedule and reported a load factor of 77%. On a rolling 12-month basis, passenger numbers plunged 81% to 27.5 million from 148.6 million.

Wizz Air said it opened its 42nd base in Palermo in Italy during the period, with two Airbus A321s to operate from the site from June 2021. It is also adding a fourth aircraft to its Albanian base in May to allow six new routes to be launched. It has also introduced new routes travelling out of Abu Dhabi to Kazakhstan and between Poland and the Mediterranean.