Frasers buys back shares ahead of its full-year results, AstraZeneca’s Farxiga drug gets approval to treat kidney disease in the US, Provident considers what to do with its troubled doorstep lending business, Unite and GIC extend their fruitful partnership, and Centamin hires help to hook Sukari up to solar.

Frasers Group has launched a new share buyback programme that will see it buy up to £60 million worth of stock over the coming weeks, sending shares to their highest level in over six years.

The company, which owns a variety of high street brands from Sports Direct to House of Fraser, said it will buy up to 100 million shares under the programme, which will start today and end when the company enters its closed period before publishing its annual results for the 12 months to April 25, 2021.

This will be the first share buyback since its last financial year to the end of April 2020, when it bought just over 17 million shares from investors.

The news comes after Frasers Group was able to start reopening its stores across the UK last month, with most of them having to close during lockdown apart from Evans Cycles, which was classed as an essential retailer.

Frasers Group warned in early April that it would book over £200 million worth of write-downs against its assets in the current financial year on top of the £124.9 million of impairments booked in the first half because of the coronavirus pandemic. It also abandoned its goal to deliver a 20% to 30% improvement in annual underlying earnings this year in December.

Today’s over 3% jump higher has pushed the share price above tough resistance around 520 which had been capping gains across April and to a fresh 5.5 year high. 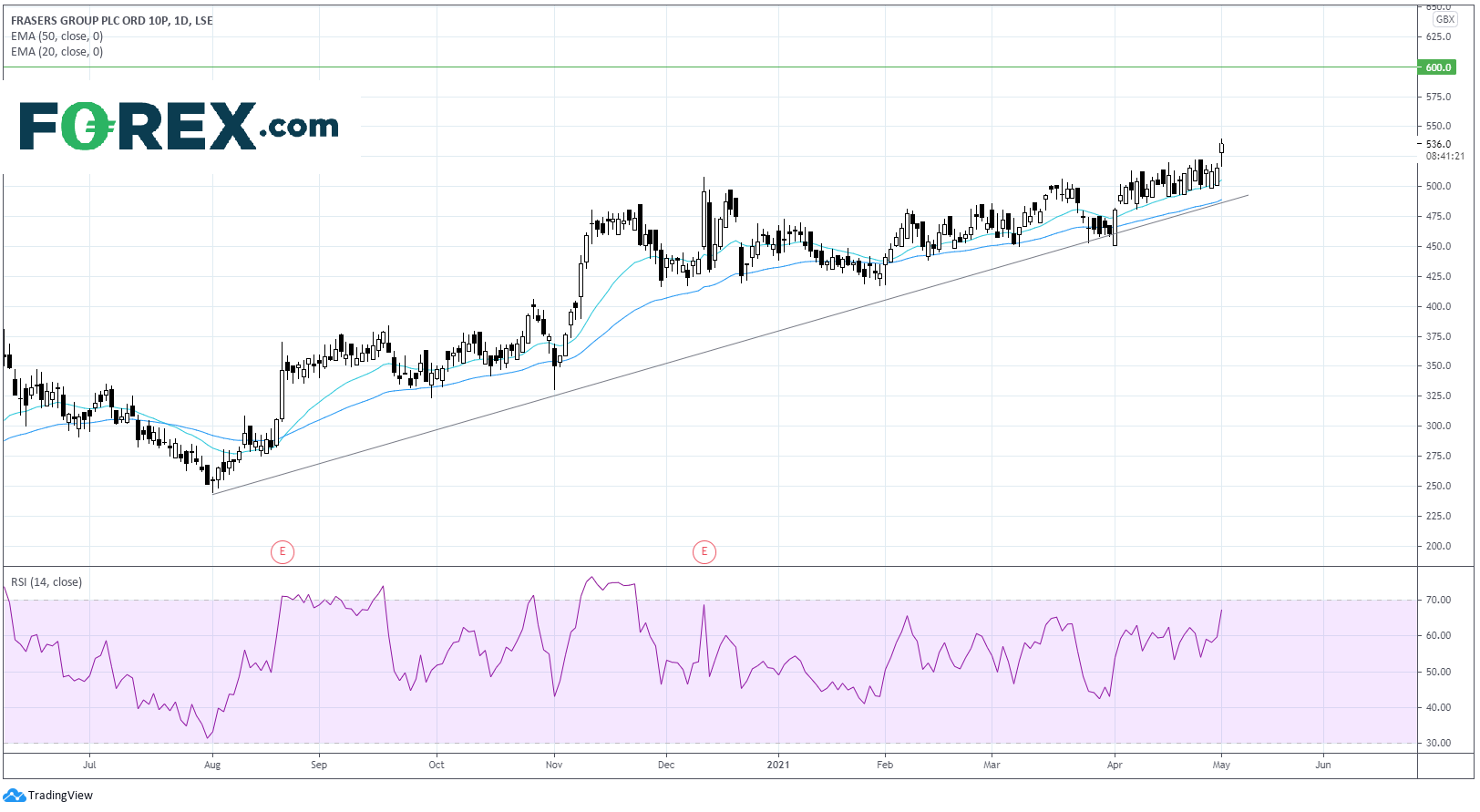 AstraZeneca secures approval for Farxiga to treat kidney disease in US

AstraZeneca said its Farxiga drug has been approved in the US, describing it as ‘most significant advancement in the treatment of chronic kidney disease in more than 20 years’.

The US Food & Drug Administration has given the green light following a recent Phase III trial that showed the drug reduced the relative risk of worsening renal function, onset of end-stage kidney disease or the risk of cardiovascular or renal death by 39% compared to a placebo. It also reduced the risk of death from any cause by 31%.

It had been given priority review designation earlier this year.

AstraZeneca said chronic kidney disease is expected to become the fifth biggest killer by 2040 and that 37 million people in America alone are thought to have the disease.

‘Today's approval is the most significant advancement in the treatment of chronic kidney disease in more than 20 years. We've shown impressive efficacy for Farxiga in type-2 diabetes, heart failure with reduced ejection fraction and, most recently, chronic kidney disease and we are thrilled to be able to bring this medicine to millions of patients in the US,’ said Mene Pangalos, executive vice president of biopharmaceuticals R&D.

AstraZeneca shares were trading 1.7% lower in early trade this morning at 7733.5.

Provident Financial has said it is nearing a decision on what to do with its troubled consumer credit division after media reports over the weekend suggested the firm will shut down its doorstep lending business.

The Mail on Sunday reported that Provident is planning to shut its doorstep credit operations as well as its online lender Satsuma in order to focus on its credit card unit Vanquis Bank and car finance unit Moneybarn.

Its consumer credit division has been under fire after a surge in complaints from customers, which has added to longer-term problems that span back to 2017 when it tried to reorganise the unit. The Financial Conduct Authority has also launched an investigation that is likely to drag on into next year.

Provident launched a scheme of arrangement for the consumer credit division in March to address the significant number of complaints. It said then that this was to help position the unit ‘for the future’.

‘Provident Financial Group notes the recent media coverage regarding the previously announced operational review of its consumer credit division including, as an option, the possibility of a managed run-off of its home credit and Satsuma businesses,’ said the company this morning.

‘The group confirms that, whilst no decisions have been made, the review is nearing completion and the outcome will be announced with the group's full year 2020 results, to be published on Monday 10 May,’ it added.

Provident shares were trading 3.2% lower in early trade this morning at 237.4.

Student accommodation provider Unite Group has agreed to extend its joint venture with GIC for a further ten years after generating strong returns and growth in rental income.

Unite and GIC currently own a 50:50 stake in the London Student Accommodation joint venture (LSAV), which was established in 2012 and owns £814 million in net assets. The pair have now agreed to extend that to September 2032.

Unite will continue act as the property and asset manager of the venture and receive a performance fee under the extended deal that is equal to 12.5% of returns in excess of 8% per year between 2021 and 2032.

The two have also agreed to settle Unite’s performance fee in cash during the fourth quarter of 2021 based on the valuation of the joint venture at the end of September. Unite said this should be within the range of £30 million to £40 million, of which £9.2 million has already been booked on its balance sheet.

The remaining £20 to £30 million will be recognised in 2021 but importantly it will not contribute toward Unite’s guidance to deliver 27 to 31 pence in earnings per share this year. The funds will also reduce loan-to-value by ‘just under one percentage point on a pro forma basis’.

The two companies intend to look at ways of expanding the joint venture.

‘I am delighted to agree a long-term extension of our LSAV joint venture with GIC. The transaction provides a strong endorsement of our sector-leading operating platform from GIC, a high calibre investment partner with whom Unite has enjoyed a successful relationship since 2005. The realisation of the LSAV performance fee in 2021 reflects a combination of strong development returns and rental growth by LSAV's London portfolio since 2012,’ said Unite.

Unite Group shares were trading 1% higher this morning at 1166.0, having briefly touched their highest level since March 2020 in earlier trade.

Centamin hires contractors to hook Sukari up to solar

Centamin has hired two contractors to help build a solar farm and energy storage system and hook it up to its flagship Sukari gold mine in Egypt that will create the ‘largest hybrid solar project at an off-grid mining operation globally’.

Giza Systems will construct the solar power plant while another firm named Juwi AG will design, supply and integrate the plant into the current diesel power plant.

‘Centamin's decision to integrate sustainable solar power at Sukari is fully aligned with our commitment to responsible mining.  It has enabled us to marry up our environmental stewardship philosophy with our strategic objective of maximising returns for all stakeholders,’ said chief executive Martin Horgan.

Centamin is spending $37 million on the project.

‘With phase one of the project near complete, including completion of the pioneering works across the 85-hectare site, concluding these definitive engineering, procurement and construction contracts was the next significant milestone in delivering the Sukari solar plant.  Working with our partners we will deliver the largest hybrid solar project of its kind, which will reduce our fuel consumption and greenhouse gas emissions from 2022 onwards,’ he added.

The Sukari mine is well placed to use solar power, benefiting from over 10 hours of sun per day on average throughout the year. Introducing solar power is expected to save between $9 million to $12 million in annual fuel costs.