Fuller, Smith & Turner raises equity to help bridge the gap until pubs can reopen, Deliveroo and Parsley Box go public, the value of Syncona’s stake in Achilles Therapeutics jumps, and Petropavlovsk says it will unveil a new strategy this year to get the company back on track.

Fuller, Smith & Turner said it is raising equity to ensure it has the cash it needs to survive the rest of lockdown and place it in the best position to bounce back when pubs reopen after being severely impacted by the pandemic.

The company said its pubs were only open for 27% of the 388 days to March 20, as lockdown rules have kept them shut for most of the last year. This has weighed on the company’s finances and caused sales in its managed pubs and hotels to fall 80% year-on-year.

As a result, it has decided to raise equity by issuing up to 6.5 million new ‘A’ shares at 830 pence each. That is equal to about 20% of its existing issued share capital before the placing.

‘The board wishes to ensure Fuller's is as well positioned as possible to reopen strongly once trading restrictions are lifted, capitalise on available opportunities and deliver long-term returns to shareholders,’ the company said.

The placing will also allow it to secure extensions to its debt facilities by pushing out maturity to February 2023 from March 2022. Plus, new ‘B’ shares will be offered to raise further cash.

The new funds will allow it to continue with its plans to reopen pubs as the UK comes out of lockdown but provide a buffer should anything go wrong. Fuller, Smith & Turner said the fundraising would allow it to return to ‘pre-pandemic debt’ levels by ‘early 2022’.

Fuller, Smith & Turner said it plans to phase the reopening of its pubs by steadily reopening 82 sites when initial rules are eased with hopes the majority of its managed estate can be back up and running by May 17. Around 70% of its managed hotels will be reopening on April 12.

The company said it expects to return to ‘normalised trading on a sustained basis’ and start generating positive cashflow again from mid-May 2021 if the government sticks to its roadmap and eases restrictions as planned. Fuller, Smith & Turner is expecting a strong recovery when as the economy restarts, citing ‘significant pent-up demand’.

It currently has net debt of £216 million, up from £152 million in February 2020, as the company is burning through around £4 million to £5 million each month its pubs are closed.

Where next for the Fuller, Smith & Turner share price?

Fuller, Smith & Turner has been trending higher since early November, reaching a high of 910 a level last seen in February last year.

Since then, the shar price has been trading in a holding pattern, capped on the upside by 910  and 850 on the lower band.

The price today has slipped below the 20 sma on the daily chart and below the 4-monthascending trendline.

The bears need to break through tough support at 850 the lower band of the channel and the 50 sma in order to break out towards 800 support. A move below here could see the seller gain traction.

On the flip side, should 850 hold a move above 865 is key for the bulls, this is the confluence of the 20 sma and the ascending trendline. A break above here could bring 910 back into focus before the pre-pandemic high of 970. 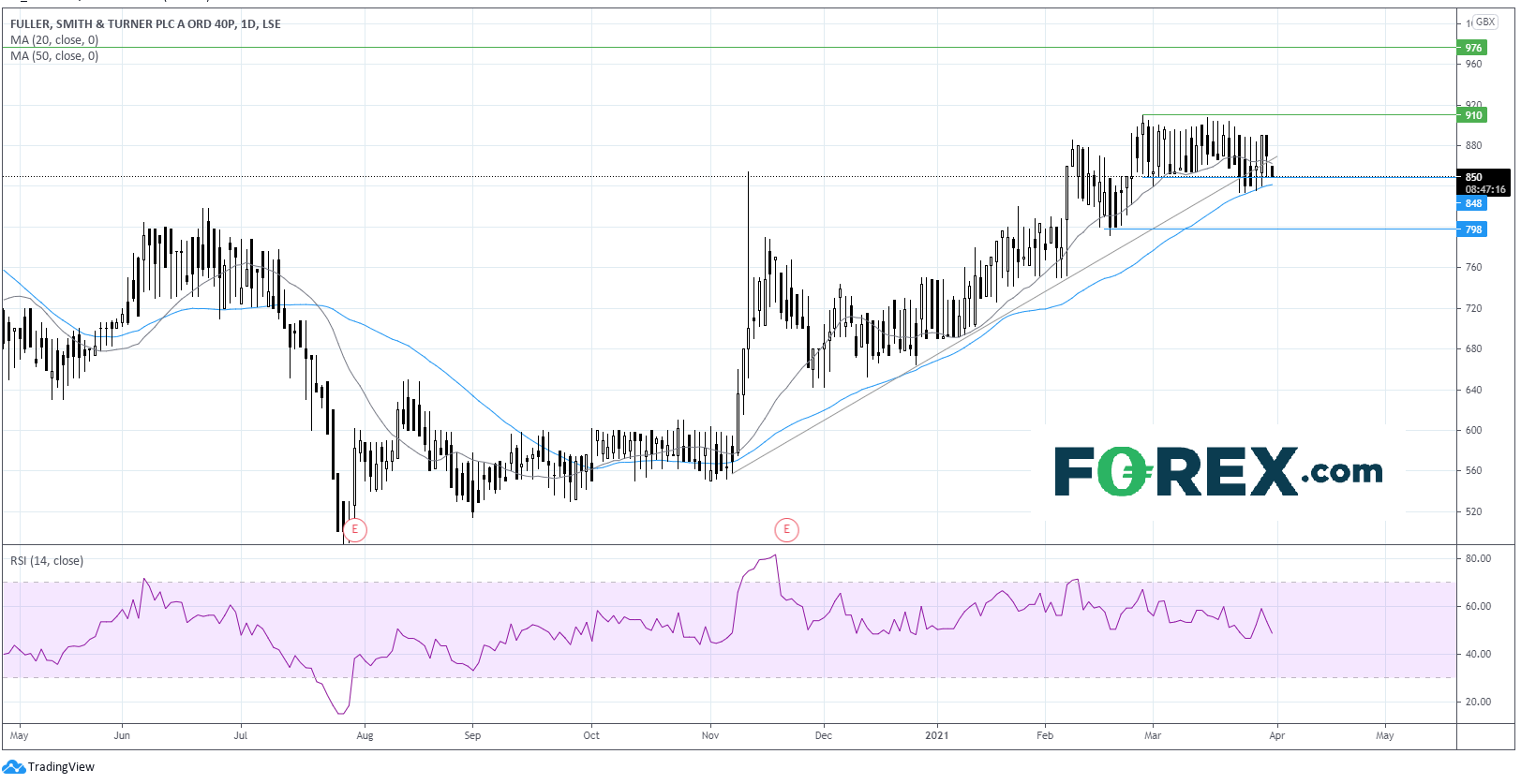 Deliveroo has priced its initial public offering (IPO) in London at 390 pence per share, giving the company a market cap of £7.59 billion as it prepares to start life as a publicly-listed business.

The food delivery company intends to offer 384.6 million shares to raise around £1.5 billion. However, only 250.4 million new shares will be issued to provide proceeds of around £1 billion to the company, with the rest going to existing shareholders that are monetising some of their investment. This will mean around 21.3% of its shares will be floated once it lists.

The funds will be used to continue expanding its online food offering.

Deliveroo shares will start conditionally trading in London from 0800 GMT today under the ticker ‘ROO’, with unconditional trading starting on the morning of April 7.

‘In this next phase of our journey as a public company we will continue to invest in the innovations that help restaurants and grocers to grow their businesses, to bring customers more choice than ever before, and to provide riders with more work. Our aim is to build the definitive online food company and we're very excited about the future ahead,’ said the founder and chief executive of Deliveroo, Will Shu.

Deliveroo shares were trading lower in early trade at 305.0.

Parsley Box has completed its IPO in London and started out life as a publicly-listed business with a valuation of £83.8 million.

The company, which delivers ready meals to the Baby Boomer demographic, has started to trade on AIM this morning. The company raised £5 million and a further £12 million for existing shareholders last week after conducting an over-subscribed placing priced at 200 pence per share.

The funds will be used to up spending on marketing ‘with the aim of becoming a household name in a currently underserved market.’

‘From an idea cooked up at the kitchen table to IPO in just four years is an incredible achievement and we're proud to be celebrating this milestone together with our customers. The business has grown rapidly, but for us it is just the beginning of our journey serving the Baby Boomer + demographic,’ said chief executive Kevin Dorren.

‘We are very pleased to welcome our new shareholders, both institutional investors and our customers who have endorsed the business by taking a stake in the company's future,’ he added.

Parsley Box shares were trading at 196.5 in early trade.

Syncona said it intends to retain a stake of around 27% in Achilles Therapeutics once the company goes public in the US and that this will result in a large uplift in the value of its investment.

Achilles, a clinical stage biopharma company that develops personalised T-cell therapies for the treatment of tumours, has unveiled plans to go public in the US on the Nasdaq Global Select Market by listing American Depositary Shares (ADSs). It intends to sell the ADSs at $18 each to raise around $175.5 million.

‘Today's milestone is a significant achievement for Achilles as it seeks to deliver its ambition of bringing neo-antigen targeted T-cell therapies to cancer patients. It comes less than five years after Syncona's first investment at the foundation of the company and we look forward to seeing the company's continued progress,’ said Martin Murphy, the chef executive of Syncona Investment Management.

The Russian gold miner said its new management team that has been appointed by chief executive Denis Alexandrov, who joined in December, have immediately started to review the business with a view of simplifying its corporate structure, cutting costs and changing the way it works with intermediaries and third parties.

The company intends to publish a new medium-term strategy by the third quarter of 2021, when it will also decide on a new dividend policy.

The changes come after Petropavlovsk hired KPMG as a forensic auditor to investigate the company’s relationship with IRC, an iron ore miner listed in Hong Kong that is 31%-owned by the London-listed miner. This is expected to come to a conclusion before the end of June.

Petropavlovsk said it expects to produce 430,000 to 470,000 ounce of gold in 2021, down from the 548,100 ounces produced in 2020. The decline will predominantly come from the Albyn mine and lower amounts from third parties. The miner said the management disruption in 2020 meant it failed to secure the right amount of material but is working on sourcing new material to help bolster output in 2022.

The company said it will spend $140 million in capital expenditure this year, primarily on constructing the new plant at the Pioneer mine and a third floatation line at Malomir. The Pioneer plant is particularly important as this will double its capacity to process ore from its own mines to 7.2 million tonnes a year compared to only 3.6 million tonnes now. It is also upping its exploration game with a $20 million budget to work primarily on Malomir and Albyn.

Petropavlovsk shares were trading broadly flat in early trade at 24.10.