Top UK Stocks to Watch: Pearson maintains dividend despite being hit by pandemic

Pearson hopes to bounce back after a tough 2020, Direct Line ups its dividend and launches share buyback programme, Clarkson beats expectations and raises its payout, Micro Focus loses a patent infringement case, and Ferguson is jointly listing in the US later today.

Pearson said it expects revenue to return to growth in 2021 on expectations that schools and workplaces will start to get back to normal after taking a battering during 2020.

Revenue slipped to £3.39 billion from £3.86 billion in 2019. Although demand for online learning has increased during the pandemic, this has not been enough to offset the disruption caused during the pandemic to its traditional business of supplying courseware to schools and assessing exams.

Net operating cashflow dipped to £450 million from £450 million. Net debt was slashed by more than half to end 2020 at just £463 million compared to over £1.0 billion a year earlier.

Pearson maintained its dividend for the year at 19.5 pence per share.

Pearson said it expects revenue to grow year-on-year in 2021.

‘Pearson's strategy is now geared around three key demand-led global market opportunities which play to all our strengths: the rise in online and digital learning; addressing the workforce skills gap; and meeting the growing demand for dependable accreditation and certification,’ said chief executive Andy Bird.

Our existing assets, strong balance sheet, new organisational structure and priorities will enable us to seize these opportunities. As the global leader in learning, nobody else has the breadth and depth of experience, scale, expertise and relationships across the entire lifelong learning spectrum,’ he added.

Pearson shares dropped over 4% in early trade, a move which has seen it fall below its ascending trend line dating back to early November.

The price is currently testing the 50 sma at the time of writing and the RSI is indicative of further losses as it points southwards below 50 but ahead of the oversold level at 30.

The bears will need to break down the 50 sma at 730 in order to approach horizontal support at 705 which capped losses on 8th Feb and also provided resistance 29th Dec & 7th Jan. A fall below this level could see the bearish move gain momentum.

Should the 50 sma hold any recovery would need the price to push back over the ascending trendline at 750 in order to target 783 last week’s high. 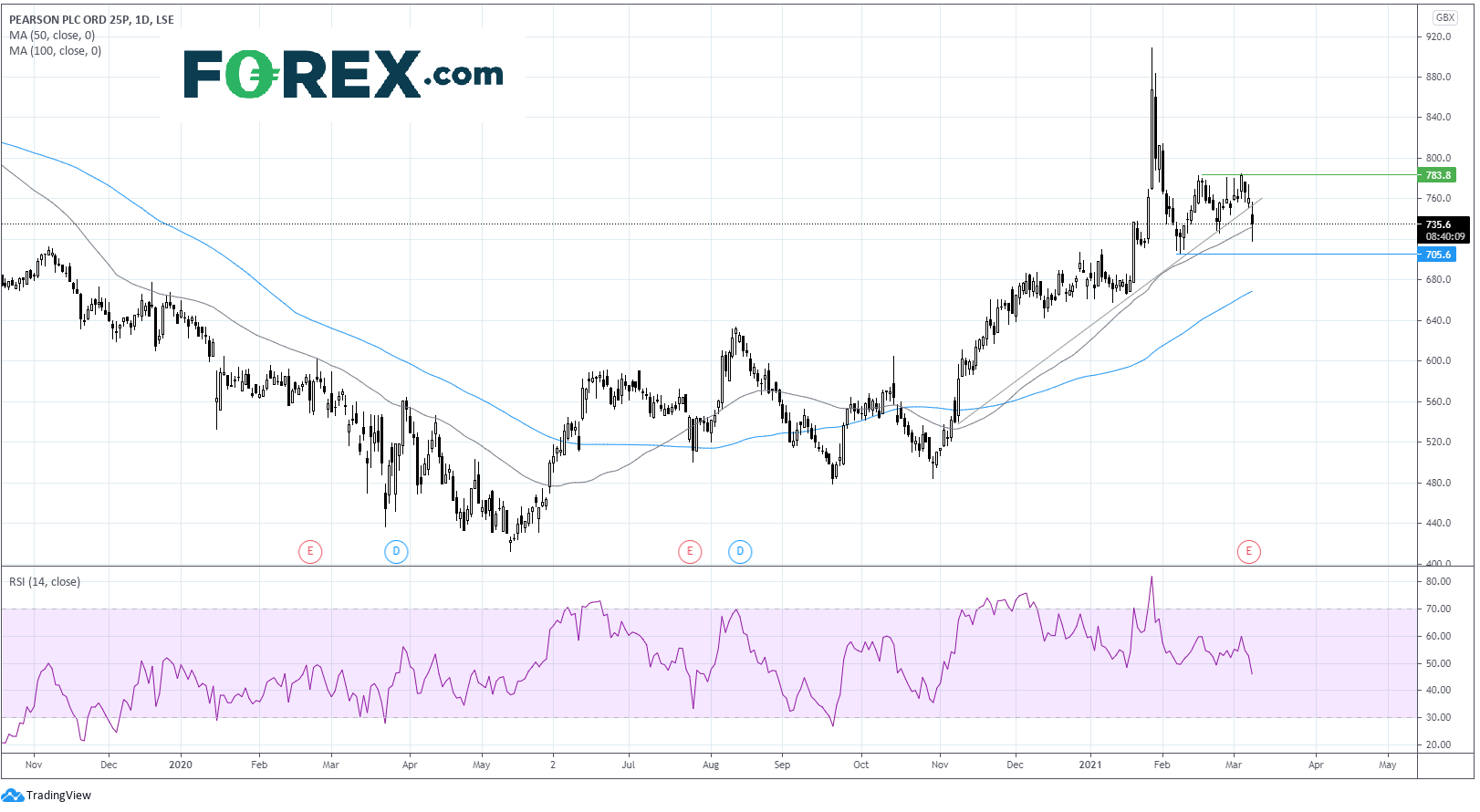 Direct Line Insurance Group raised its final dividend by over 2% in 2020 and launched a new £100 million share buyback programme despite reporting lower revenue and profits during the year.

In-force policies dipped to £14.61 billion in 2020 from £14.78 billion the year before. Notably, Direct Line’s own brands like Churchill and Privilege reported growth of 2.2% but this was offset by falls elsewhere. Gross written premiums stayed broadly flat at £3.18 billion.

Operating profit dropped to £522.1 million from £546.9 million the year before, with its combined operating ratio improving to 91.0% from 92.2%. Profit declined because of increased costs related to major weather events and, although claims being made through motor and commercial policies fell during the pandemic, this was offset by increased investment and the impact coronavirus has had on claims on travel policies.

Direct Line will pay a final dividend of 14.7 pence for the year. Direct Line had originally declared a dividend of 14.4p for 2019 but this was cancelled when the pandemic erupted and then later paid out as a special interim payout in 2020. The company is also launching a £100 million share buyback.

Going forward, Direct Line said it is still aiming to deliver at least 15% return on tangible equity per year after comfortably delivering 19.9% in 2020. It is also aiming for a combined operating ratio of 93% to 95%, slightly higher than 2020’s result.

Shipping giant Clarkson said revenue and underlying profits both fell as the pandemic disrupted global trade in 2020, but said it beat expectations, raised its dividend yet again, and was confident about the future as it enters 2021 with a larger order book.

‘Given the circumstances, to have delivered a strong set of underlying results that were both cash-generative and exceeded market consensus, is a testament to our robust business model and the quality of our team,’ said Clarkson.

Clarkson said it has raised its dividend for the 18th consecutive year after inching the payout up to 79.0 pence from 78.0p in 2019.

‘Until the worst of the COVID-19 pandemic has passed, its longer-term impact on the global economy remains uncertain. However, we are confident that government stimulus, the energy transition, the widespread desire for the world to return to normality, and the pent-up demand for travel will ensure that when a sustained recovery begins, the effects will be positively felt in the world of shipping,’ said Clarkson.

‘We start 2021 with a stronger forward order book and firmer freight rates in a number of verticals, but sterling has strengthened against the US Dollar creating an additional headwind, particularly within Broking, and the global COVID-19 pandemic, whilst improving, remains unresolved. The expected recovery in demand is now unlikely to gather momentum until later in the year and thus in 2021 we believe our results will revert to being second half weighted,’ Chairman Bill Thomas said. ‘As such, the board remains confident in both the outlook for the shipping, offshore and renewables markets and, indeed, in the group itself.’

Micro Focus International said it has lost a patent infringement case in Texas and that a jury has ordered it to pay $172.5 million in damages, but said that it intends to appeal the decision and continues to believe that it has not infringed upon any intellectual property.

The company was taken to court in the Eastern District of Texas in the US by Wapp Tech back in 2018, when Wapp said Micro Focus was selling certain products, including LoadRunner and Performance Center, that infringed on three of its patents.

‘On 5 March 2021, the jury in the case has now delivered a verdict in favour of the claimant and awarded damages totalling $172.5 million. The matter is awaiting the judge to hand down his judgement and the judge has discretion to increase the total damages awarded,’ said Micro Focus.

‘Micro Focus has received comprehensive and clear advice from its external counsel that it has a very strong case to appeal both the infringement verdict and the amount of the damages. Accordingly, Micro Focus intends to appeal any judgement resulting from the verdict. Micro Focus continues to contend that there has been no infringement of any intellectual property and its advice from external counsel continues to support this,’ the company added.

The plumbing and heating specialist, which is based in the UK but makes most of its revenue in the US, said it is hoping the move will see more US domestic funds invest in the business.

‘The executive team is undertaking additional investor engagement in the US to enhance understanding and awareness of Ferguson's business amongst this significant incremental pool of capital,’ said Ferguson.

Ferguson’s American Depositary Shares (ADS) programme will be terminated and existing ADSs will be cancelled and exchanged for ordinary shares in the business.

Ferguson will still be listed in London and will retain its position in the FTSE 100.

‘Today's announcement follows on from the recent disposal of Wolseley UK which means that 100% of our revenues are now generated in North America. The board believes the natural long term listing location is the US and in April 2020, we set out a two-step process to achieving this aim,’ said chairman Geoff Drabble.

‘The additional US listing is an important milestone and as previously announced, after a period of transition the board intends to hold a shareholder vote on a proposal to change the primary listing to the US,’ he added.