This action comes on top of the recent decision to impose steel and aluminum tariffs on many US allies, including Canada, Mexico, and the European Union. Predictably, those countries countered with $20B in tariffs on US goods, including pork, steel, bourbon, peanut butter, and orange juice. With China vowing retaliatory tariffs of its own (and the US in turn vowing retaliatory tariffs to those), traders fear that the simmering “trade war” will get worse before it gets better.

As any Economics 101 student will tell you, tariffs typically end up hurting all the countries involved, as they add friction to international trade and benefit a small subset of the local economy at the expense of the broader populace. In this case, the best-case scenario is that global leaders recognize the risk of a full-blown trade war and quickly come to the negotiating table to hammer out mutually beneficial trade agreements. The worst-case scenario would be that continued tit-for-tat tariffs choke off the global economic expansion and lead to a synchronized slowdown across the world.

Focusing in on North America specifically, the US’s aggressive line on trade has thrown the future of the North American Free Trade Agreement (NAFTA) into doubt. Despite high stakes elections upcoming in both Mexico and the US, NAFTA negotiations are poised to continue in the coming months. Looming over the talks is the US threat to impose steep import duties on automobiles, which both Canada and Mexico have declared is a deal breaker. Clearly, headlines surrounding NAFTA and broader trade issues will continue to have a dramatic impact on markets in the months to come.

One currency pair that is particularly vulnerable to trade developments is USD/CAD. The US and Canada conducted over $625B in trade (!) in 2016; in fact, the trade across the Ambassador Bridge between Detroit and Windsor alone is equal to all trade between the US and Japan! Clearly, any new tariffs could have a chilling effect on both countries’ economies, with the smaller Canadian economy particularly vulnerable.

Technically speaking, USD/CAD has been advancing in a choppy uptrend since bottoming near 1.25 in mid-April, and the gains have accelerated over the last two days. The pair formed a large bullish engulfing candle in the wake of Thursday’s hawkish FOMC meeting, signaling a big shift in favor of the bulls. That’s been followed by a breakout above the year-to-date high at 1.3125. As long as bulls are able to keep the pair above that level, there is little in the way of resistance until the mid- to upper-1.30s. On the other hand, a move back below the key 1.3125 area would likely presage a return to the recent bullish trend line near 1.30. 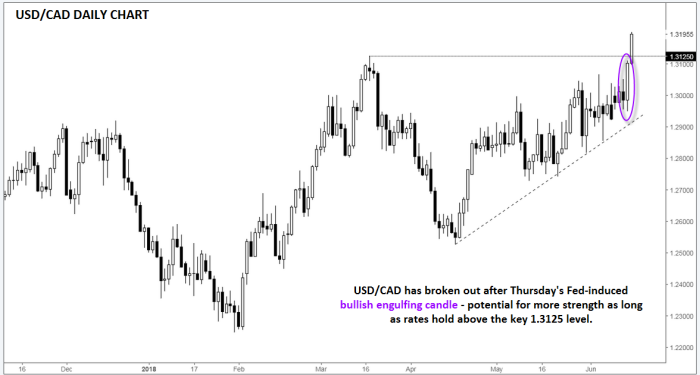